In a bid to safeguard the island territory from mainland China, Taiwan’s President Tsai Ing-wen vowed to protect the sovereignty of the islands at the inauguration ceremony of an indigenous submarine.

The ceremony marked the beginning of the production of eight indigenous submarines which will be completed in the third quarter of 2024. It is expected to carry out sea trials in 2025.

The Harpoon missiles which will be integrated with the indigenous submarines will be supplied by the US in a deal worth over $2 billion. The Harpoon is a subsonic, highly versatile, all-weather anti-ship missile manufactured by Boeing.

It is the standard surface-to-surface missile in service with the US Armed Forces and has been exported to American allies around the world including India, Japan, South Korea, Taiwan, UAE, Singapore, and the NATO countries.

The missile carries a 220 kg conventional warhead having a range of around 300 kilometers, and can be launched by air, surface, or by submarine-based platforms.

“According to the contract construction of the prototype submarine will take 78 months and delivery of the submarine to the navy will be made by 2025,” said Cheng Wen-lon, chairman of Taiwanese firm CSBC Shipbuilding at the ceremony. 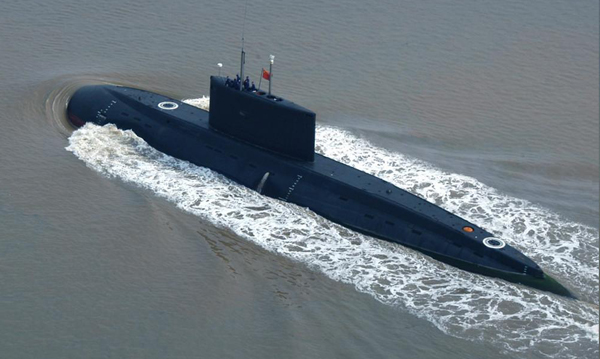 Tsai said that the project also signals the government’s dedication to national defense, in addition to showing the world Taiwan’s commitment to protecting its sovereignty, reported Taiwan News. “Despite all the odds, we are officially rolling out a Made-in-Taiwan submarine beginning today,” she said.

Taiwan already has four aging submarines and plans to replace them with eight new ones. “Armed with heavyweight torpedoes and underwater-launched missiles, they will be able to be deployed at key ambush areas to strike PLA warships in the event of an attack,” Chieh Chung, a researcher with the National Policy Foundation, an opposition Kuomintang party think tank told SCMP.

The two items of equipment used to manufacture the submarine have been approved by the US, revealed the Taiwanese Navy.

Cross-Strait relations with mainland China have been deteriorating with Beijing claiming sovereignty over the island and seeking its return to the mainland fold even by force if necessary. It has staged several drills and is firm on its motives.

However, after winning a landslide victory in January, Tsai, from the independence-leaning Democratic Progressive Party, began her second four-year term in May. She has refused to accept the one-China principle and is strongly supports the self-governance of Taiwan.

The US has pledged to fight alongside Taipei if a war breaks out between the island territory and mainland China. Washington has supplied Taiwan with military weapons and artillery. Earlier, the US signed a whopping $62 billion contract with Taiwan to supply 66 new F-16 “Viper” jets additional jets, which when delivered by 2026, will take the island nation’s existing fleet to over 200 aircraft.