Yes, a 1943 M4A1 Grizzly, an adaptation of the Sherman medium tank that was built in Canada in late 1943, is up for sale on a digital auction platform, Bring a Trailer. 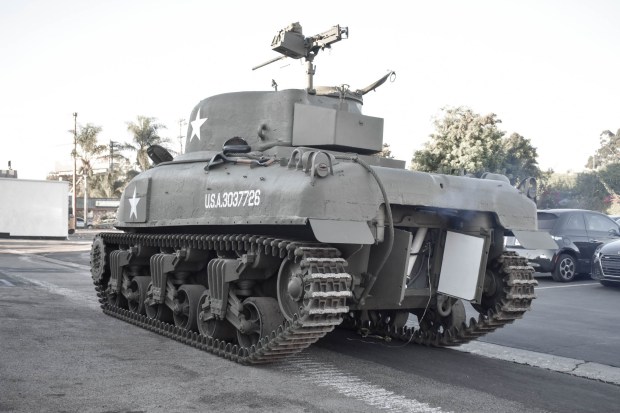 The cast-hull variant of the Sherman may fetch up to $480,000 and provides a good opportunity to collectors of armored fighting vehicles.

The tank repainted inside and out has continental-built 975ci Wright Whirlwind nine-cylinder radial engine, a Spicer five-speed manual transmission, a demilitarized 75mm main gun, a propane-fired .50 caliber replica machine gun on the turret, and a dummy .30 caliber machine gun in the forward hull.

Its most vital parts, including the engine, six spiked road wheels, and turning brakes have been serviced. The seller, who is offering the tank from California with a bill of sale, highlights a cast, single-piece upper hull welded to an armor-plated lower hull. The seller noted that this example is evidence of damage repair on the left-front corner of the hull, with a pair of drill marks showing where the repair was tested.

According to the seller, this is only one of less than 20 M4A1s that are known to still run. These tanks were manned by a five-man crew, with a driver at the front left next to the machine gunner, and three men in the turret. A dual-position seat allows driving the tank with the hatch open or closed. Its controls have a foot throttle, foot clutch, and dual differential-brake steering levers.

The Grizzly is one of the most famous and brilliant combat tanks of World War II. A successor to M3 from 1941, it was distinguished by a 360° rotating turret with a 75mm gun. The production of this model continued until April 1945.

Previous article
Why AMRAAM-ER, The World’s Most Powerful Beyond Visual Range (BVR) Missile Can Be A Game Changer In The Middle-East?
Next article
Russia Ready For Doomsday, Its ‘Deeply Buried’, Underground Nuclear Command Bunker Is Almost Complete