The F-35 Of Drones Is Here? Meet US Army’s Next Combat UAV That Boasts More Firepower & Short Take-Off, Landing Feature

The F-35B is a short takeoff and vertical landing (STOVL) jet. It can land vertically like a helicopter and take-off in very short distances. This allows it to operate from challenging, short-field bases and a range of air-capable ships like Mojave, named for one of the harshest and most austere areas of the world.

The original goal was to create a drone that the military could use in harsh environments and would have a bigger payload than the US Army’s MQ-1C Gray Eagle. The Mojave is also based on the General Atomics MQ-1C Gray Eagle.

It’s designed for short takeoff and landing from semi-improved surfaces, with a focus on supporting expeditionary and distant operations.

According to David Alexander, president of General Atomics Aeronautical Systems, the company’s engineers have been actively working on the drone for the past two years.

GA wanted a drone to be runway-independent. It had realized that a vertical takeoff and landing (VTOL) configuration would be too challenging, following which, the company opted to go for the STOL design.

While Mojave’s avionics and flight control systems are based on the ones used in the MQ-9 Reaper and MQ-1C Gray Eagle-ER, its larger wings and high-lift devices set it apart from the latter.

Its enhanced short-field performance, according to the company, would make it ideal for carrier-based operations without the requirement for a catapult or arresting gear during recovery. Although, it’s unclear whether or not services are interested in it, as there is currently no program in which the new drone would fall.

Alexander added that the product has piqued the interest of several international buyers. However, the company did not disclose which country is currently interested in the drones. He further said, “You’re fighting physics and you end up with something that doesn’t persist.”

With the assistance of leading-edge slats and double-slotted flaps, the Mojave’s wing design is new, tailored for maximum lift. When compared to the wings of the Gray Eagle or the modified Gray Eagle Extended Range, it has a wider chord and broader dimensions. 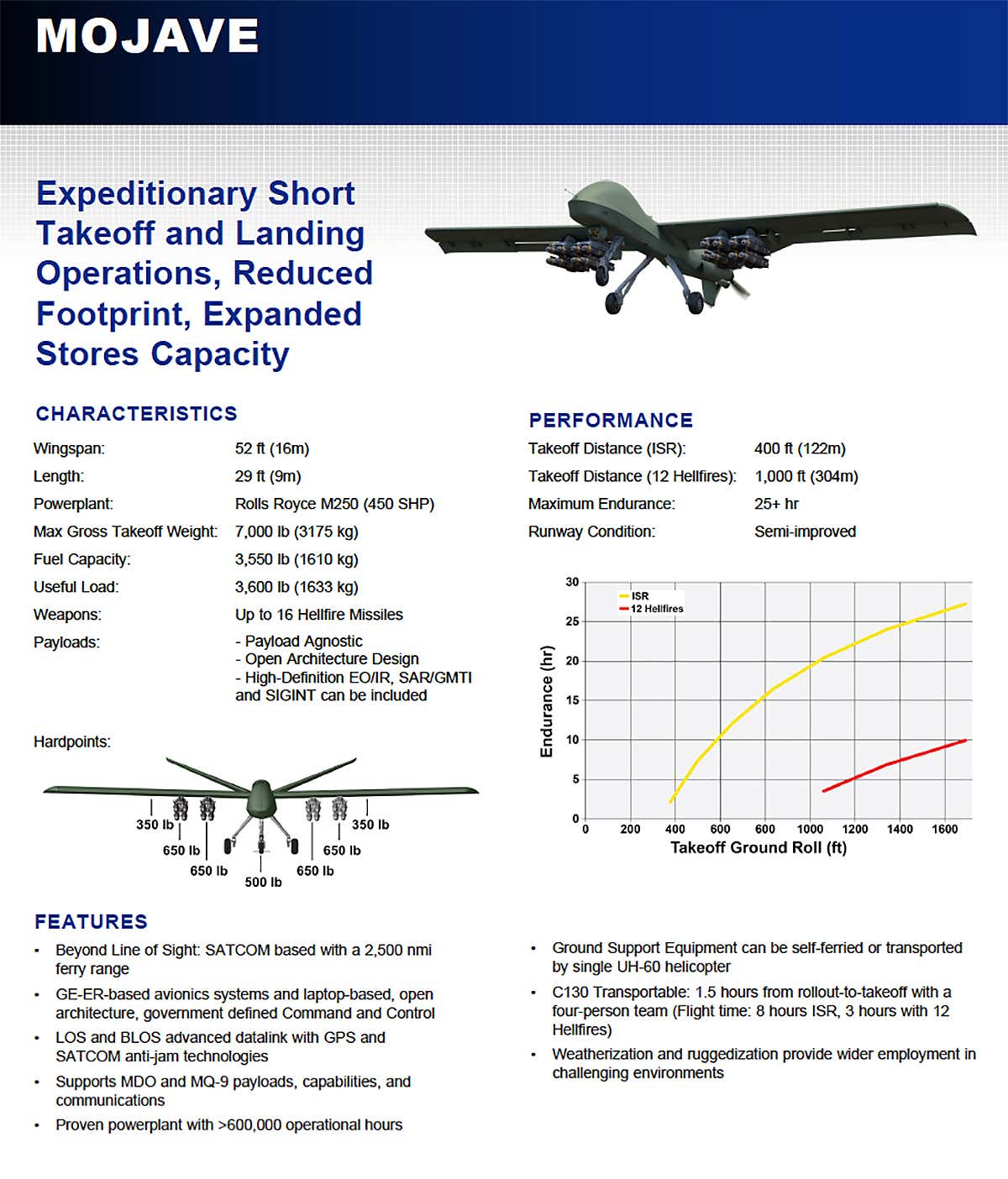 The new drone has a 52-foot wingspan, compared to 56 feet for the conventional MQ-1C and 58 feet for the Gray Eagle Extended Range (GE-ER).

Mojave offers alternatives to traditional airport runways and infrastructure for forward-basing activities. It can land and take off on rough terrain while maintaining significant durability and persistence advantages over manned aircraft.

This unmanned aircraft has landed successfully at speeds as low as 45 knots during flight testing. According to GA-ASI President Alexander, it “doesn’t even look like it should be flying, it’s going so slow.” Mojave could fly in the air for up to 25 hours or more, but this would demand more fuel.

However, with an increase in fuel load, the drone will require a longer runway for takeoff. Alexander said, “All you need is a dirt road to function as a runway”.

The fuselage of the Mojave is comparable to that of the Gray Eagle, which was based in part on the MQ-1 Predator and MQ-9 Reaper. It does, however, replace the MQ-1C’s tail with one that looks more like the MQ-9’s.

Other noteworthy modifications may be found near the back of the fuselage, where a Rolls-Royce M250 turboshaft engine is installed. The M250, a popular design that already powers a variety of manned fixed-wing aircraft and helicopters, has a 450 horsepower output.

Mojave can accommodate multiple sensors, including radars with synthetic aperture imaging functions and signals intelligence suites, besides communications packages, in addition to the sensor turret under its nose. GA-ASI is using its Scalable Command and Control (SC2) system, which it has been developing for the US Army, to control the drone.

Mojave features six underwing hardpoints and one centerline hardpoint, all of which are capable of handling greater weights. The potential of the new drone to carry up to 16 Hellfire missiles beneath its wings has been highlighted by the company, but it has also been emphasized that it could carry a variety of other weapons and supplies based on a customer’s needs. The aircraft features an increased payload capacity of 3,600 lb (1,633 kg).

Alexander said Mojave could have greater autonomous capabilities in the future. He notably mentioned GA-ASI’s involvement in the Air Force’s Skyborg program as an example of the company’s current work in this field. It is pertinent to note that under the Skyborg program, F-35 and F-15EX jets could control their own companion drones.

Previous articleDECODED: Can China Really Transfer Its Stealth Technology To Conventional Combat Jets Like J-11 & J-15 Fighters?
Next articleMRH-90 Taipan: Why Did Australia Discard Relatively New European Helicopters Worth Billions of Dollars For US ‘Hawks’?