“Chinese aggression has been increasing along the Line of Actual Control (LAC) and more particularly in Galwan valley since May 5, 2020. The Chinese side has transgressed in the areas of Kungrang Nala, Gogra and north bank of Pangong Tso Lake on May 17-18,” the ministry said in the document under the title “Chinese Aggression on LAC”. 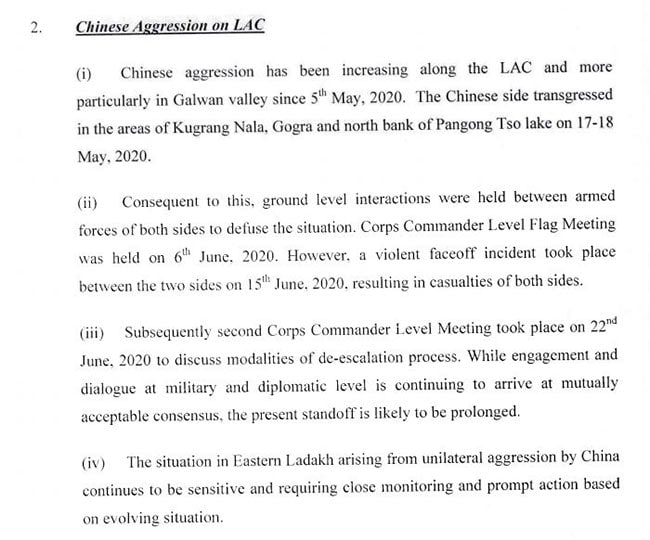 In the official document, the ministry said the Chinese People’s Liberation Army (PLA) transgressed into the Indian side of the Line of Actual Control (LAC) in the areas of Kugrang Nala, Gogra and the north bank of Pangong Tso on May 17-18.

“Consequent to this, ground-level interactions were held between armed forces of both sides to defuse the situation. Corps Commander Level Flag Meeting was held on 6th June. 2020. However, a violent face-off incident took place between the two sides on 15the June resulting in casualties of both sides,” it said.

This was the first time any official document had admitted of the “Chinese aggression”, since tension near the LAC started in May and escalated into a violent clash in decades between the neighbours on June 15, when 20 Indian soldiers were killed in the line of duty.

This morning, after two days when it was first uploaded on the website, the document vanished and the link is not working anymore. A defence ministry spokesperson said the document “did not go through him”.

The document also talked about the ongoing disengagement process but observed that “while engagement and dialogue at the military and diplomatic level are continuing to arrive at a mutually acceptable consensus, the present standoff is likely to be prolonged.”

“The situation in Eastern Ladakh arising from unilateral aggression by China continues to be sensitive and requiring close monitoring and prompt action based on the evolving situation,” it added.