Unlike its first attempt in 2016, the investigative series called ‘Project Pegasus’, which describes the expanded use of digital surveillance through powerful Israeli software by governments worldwide has caused a massive international uproar in its second major attempt this time.

It is apparent that unlike in 2016 when targets were shown to be essentially rights activists, dissidents, and journalists from the Middle East, this time if it is in headlines because the project has significantly widened the scope of potential targets to include members of Arab royal families, Indian politicians, diplomats, and business executives.

Besides, the news is released through a media consortium that includes the powerful The Washington Post, The Guardian, Le Monde, and Sueddeutsche Zeitung.

However, beyond the uproar lies an important question that does not have an easy answer. Is the Pegasus Project aimed at debating the very idea of secret surveillance by the state or the government against individual citizens or is its aim mainly political with specific governments or countries as targets?

First, the list of the disclosed telephone numbers that is shown under the suspected surveillance is not the current list. The list covered the period mostly up to the year 2018-end.

Secondly, the Project Pegasus, a collaborative effort of Paris-based NGO Forbidden Stories, Amnesty International, Citizen Lab, and 17 media houses from the 10 countries, including The Wire news portal of India, has not identified the source of the leak. Nor has it authenticated the data to protect the safety of its source. What is said is that Amnesty collected the data and the Citizen Lab vetted Amnesty’s methodology for confirming Pegasus’ infections and deemed it sound.

Thirdly, Amnesty has clarified that a phone number’s presence in the data does not necessarily mean an attempt was made to hack a device. Digital forensics conducted by Amnesty International’s Security Lab has not conclusively found in the phones that it tested that those were compromised by Pegasus spyware.

Of the smartphones of 67 people that Amnesty was able to examine on the list, it found only 23 infected, with 14 phones showing signs of attempted intrusion. Test scan on the remaining 30 smartphones remained inconclusive.

Why Only Israeli NSO Singled Out?

It may be noted that the Israeli NSO Group, which has developed the Pegasus spyware, is only one of its kind in the international market for surveillance purposes. This point should be kept in mind as the NSO Group is insisting that its products are primarily used by law enforcement agencies for legitimate crime-fighting purposes.

More importantly, NSO exports are vetted through the Israeli Defence Ministry, which, in turn, “approves the export of cyber products exclusively to governmental entities, for lawful use, and only for the purpose of preventing and investigating crime and counterterrorism.”

In other words, what the NSO or the Israeli government is saying is that since its products are not sold to individuals or private entities, it has little to do with targeting them.

In the global market, Germany’s “FinFisher”, like Pegasus, is marketed as a tool to help intelligence and law enforcement agencies to fight crime. Its abuse was also noted in Bahrain.

We would like to thank everyone for the overwhelming response to the #PegasusProject . Today, we reflect on forensic & technical research conducted by @amnesty’s Security Lab that has helped expose the enormous scales of abuse linked to NSO Group’s Pegasus spyware. Thread 1/13 pic.twitter.com/EASpJrFlA5

Italian firm “Hacking Team” was rebranded as Memento Labs after it emerged that the company allegedly sold its spyware to dozens of foreign governments leading to a Pegasus-style scandal in 2015.

Similarly, it is well-known how the Canadian company “Sandvine” has sold censorship technology to Belarus and Egypt. The French firm Nexa Technologies has also exported internet surveillance equipment to Libya and Egypt.

And the US-based company Oracle has provided surveillance products in China.

The point is that while many Western companies have a long track record of selling powerful surveillance tools to many governments, many of them being authoritarian, the Project Pegasus selectively targeting Israeli NSO and other Israeli companies over the last few years has not avoided the attention of many analysts.

In fact, last fortnight, the Citizen Lab claimed that Candiru, another Israeli cyber warfare group, weaponized vulnerabilities in Microsoft and Google products, allowing governments to spy on more than 100 journalists, activists, and political dissidents globally mainly in Turkey and Singapore.

The allegations are that Candiru often recruits veterans of the army’s elite units, and sells software that allows its clients to hack into computers and cellphones remotely. 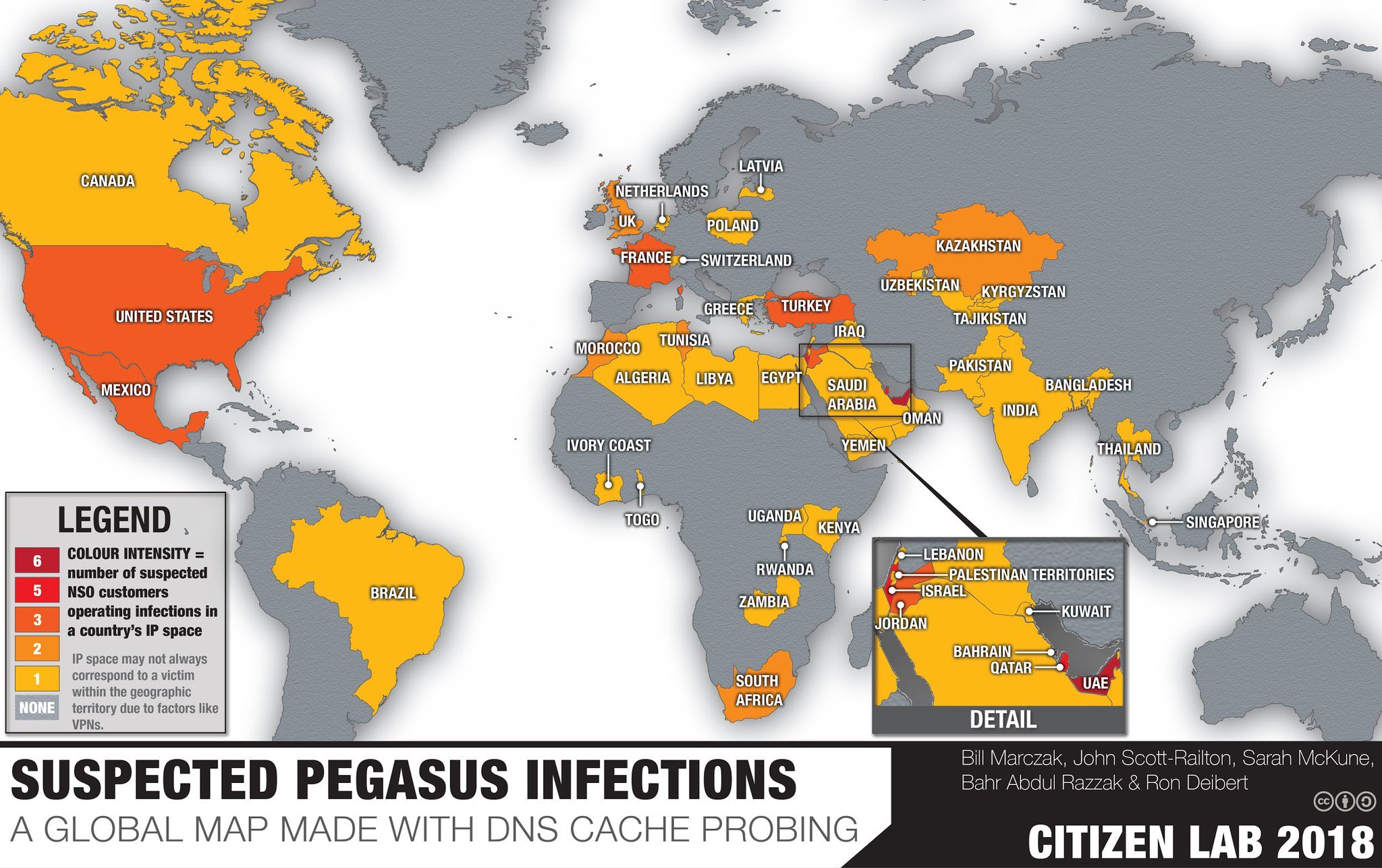 And in 2017, Citizen Lab had found that Ethiopia had used spyware developed by Cyberbit — yet another Israeli firm — to infect the computers of exiled dissidents.

The systematic campaign by Project Pegasus against Israel has made its sympathizers and supporters to campaign for isolating Israel diplomatically and boycotting Israeli products, at least in countries that are democratic. So much so that Amnesty has also filed a suit against NSO Group. It leads the campaign otherwise against the alleged Israeli atrocities in areas dominated by the Palestinians.

In fact, there is now an organization called the “Boycott, Divestment and Sanctions” (BDS) movement. It is a loose amalgam of groups and individuals, who call for economic and cultural pressure on Israel in solidarity with the Palestinians, a call started by Palestinian activists.

BDS’ strategy is said to be twofold: “that international pressure will exert a dramatic toll on Israel and on Israeli citizens, and that Israelis will then see and opt for a political path out of this pressure.”

The US-based ice-cream brand Ben and Jerry’s recent decision to stop selling its products to the Jewish settlements in the Israeli-occupied Palestinian territories of East Jerusalem and West Bank needs to be seen in this context.

The BDS, which is now at the forefront to capitalize on the allegations of the Project Pegasus, is hoping for the best from demonizing Israel. It has now many allies in the media groups that are part of the Project. Most of these media personalities are of “Left/Liberal” persuasion and have written critically on Israel, of late.

The Role Of A US Billionaire

Another factor to note in this campaign against Israel is also American billionaire George Soros, whose philanthropic outfit, Open Society Foundations, is a major source of financial support for the entities such as Amnesty, Citizen Lab, Forbidden Stories, and Foreign Architecture. All of them happen to be the leading and important components of Project Pegasus.

Israel has alleged that Soros is “continuously undermining Israel’s democratically elected governments,” by his funding of organizations “that defame the Jewish state and seek to deny it the right to defend itself.”

Soros claims to be a big advocate for liberal democracies everywhere and his organization supports the forces fighting autocrats and suppressers of dissent and human rights, a reason why he is not liked by Hungary, Turkey, and Russia too.

Soros also happens to be a big critic of Indian Prime Minister Narendra Modi. In his speech delivered at the World Economic Forum held at Davos on January 24, 2020, Soros had said, “Nationalism, far from being reversed, made further headway. The biggest and most frightening setback occurred in India, where a democratically elected Narendra Modi is creating a Hindu nationalist state, imposing punitive measures on Kashmir, a semi-autonomous Muslim region, and threatening to deprive millions of Muslims of their citizenship.”

This is the reason why some analysts have argued that Soros’s personal opinion and his funding of the consortium of the Project Pegasus have played a huge role in India becoming a target of the story.

It is also being pointed out in this regard that Soros happens to be an associate of the Wellspring Philanthropic Fund, one of the financers of the Forbidden Stories as well “Sherpa”, the French NGO, which is a persistent litigator in the so-called scam in France over the sale of Rafale fighters to India.

Viewed thus, is the Project Pegasus an ideological battlefront? A question that is bound to get conflicting answers.

Previous articleFrom Tanks To Trucks: How US Firms Continue To Make Enormous SUVs & Some Of Them Are As Large As Battle Tanks
Next articlePegasus Spy Scandal: Israeli Defense Minister To Visit France To Discuss NSO Hacking Row