There is hardly a month left for US presidential elections and there is a grave possibility of a war between the US and China in the South China Sea where Washington had earlier deployed three aircraft carriers apart from the unending verbal-war over the spread of COVID-19.

The US has been encircling China with many of its allies like Japan, India, Australia, Taiwan, Vietnam, Indonesia and the Philippines etc to cut China from the Straits of Malacca from where the bulk of Chinese exports reach the Middle-East, European and US markets. 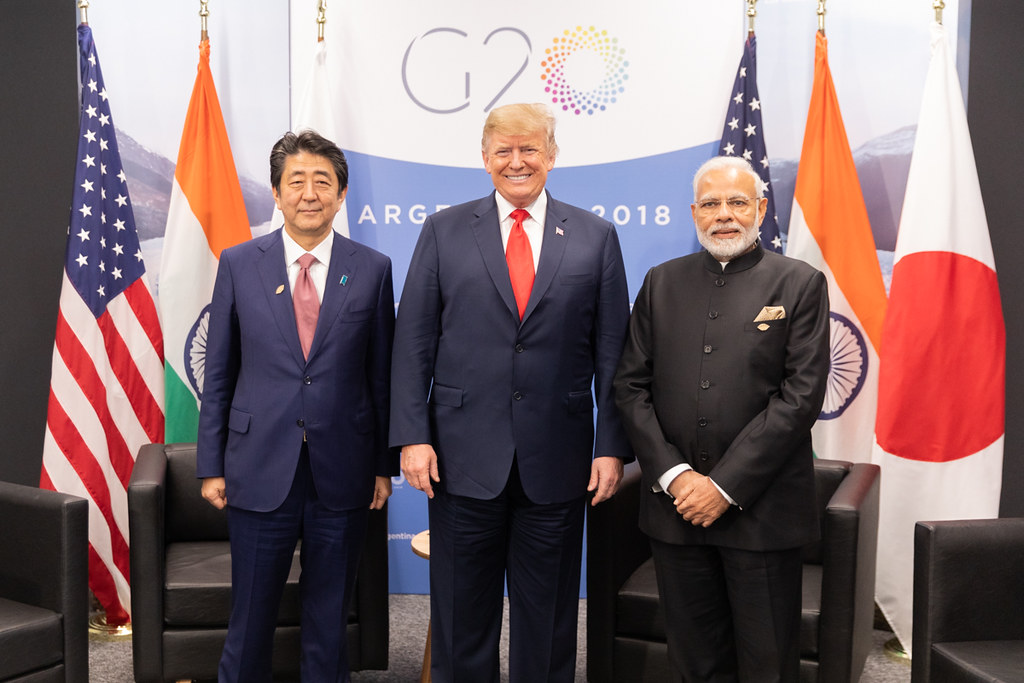 Earlier, the US had released its Pentagon report on September 2, 2020, to let the whole world know about the burgeoning Chinese power, in which the US too has been left behind and acting fast to the prevalent currents, Washington took Japan in confidence and announced the formation of QUAD on the lines of NATO, which would include Australia, Japan, India and the US.

The importance given to the project can be observed as the US made its top diplomat, Deputy Secretary of State Stephan Biegun to announce it (QUAD) on the lines of NATO or the European Union as a counter to China in the Indo-Pacific region.

‘There is certainly an invitation there at some point to formalize a structure like this,” Biegun said.

Known officially as the Quadrilateral Security Dialogue, the grouping is an informal strategic forum of the four democracies that hold semiregular summits and joint military drills and discusses regional economic and development assistance.

It is often credited as the brainchild of former Japanese PM Shinzo Abe, whose August 2007 speech titled “Confluence of the Two Seas” provided the foundations for the ‘grouping’, published in The Times of Japan on September 1, 2020.

This news on QUAD came as a part of the strategy to push back China in virtually every domain and QUAD is (therefore going to be the frontline) to contain China. ‘

For the first time in the QUAD’s history, the stars are aligning for a harder line on China, and the implications going forward could be significant,” said a senior defence analyst.

“Most importantly, the QUAD grouping would also no longer be symbolic, but concrete and this should enhance the deterrence value of the group toward China,” the analyst wrote.

It is becoming increasingly clear that a new bloc is round the corner and if India goes to war with China or Pakistan, it would be construed to be a war with Japan, Australia and the US, and all the QUAD nations would jointly come to the rescue of each other, and this is what India can rightly expect as it is ranged against both China and Pakistan.

Other nations which are to follow in QUAD membership are likely to be Indonesia, Vietnam, South Korea, New Zealand, Philippines, with Israel as a formidable buddy to add to the strength of the US.

How China and Russia will counter this US move is for the time to tell?’ And, the answer to it has now arrived!

The Russian envoy to US Anatoly Antonov in an interview to Asia.Nikkei.Com on September 18, 2020, expressed the futility of the formation of QUAD for the opaque and non-transparent nature it possesses.

‘Russian envoy to the US blasted ‘unproductive’ coalition against China, called QUAD’s Indo-Pacific strategy opaque. In his interview, he averred that ‘ American efforts to build a multinational coalition to restrain China are “counterproductive” and threaten global security and stability, “Russia, for its part, will never participate in coalitions against third countries, including China,”

“Unfortunately, Washington promotes anti-Chinese sentiments and its relations with regional countries are based on their support to such an approach,” Russian envoy to the US said.

With American and European sanctions weighing heavily on its economy, Russia has sought closer ties with Asian countries as a counterweight to the U.S.-led economic order. Moscow and Beijing have slashed their use of the dollar in bilateral trade in recent years, a trend some analysts view as a step toward a financial alliance.

The ambassador spoke about ‘Russia’s relationship with India, a country with which it has historically been close and that Washington also seeks to woo to its side.

“Russia is strengthening its ties with India in the areas which the U.S. and other Western countries have closed for cooperation with New Delhi,” he said.

He mentioned energy and “military-technical cooperation” as areas where the partnership is gaining momentum, without going into further detail.

India’s planned acquisition of the Russian S-400 missile defence system is opposed by the U.S., which has threatened to restrict exports of advanced American weaponry to India if the deal goes through.

Moscow sees this possibility as an opportunity to expand its arms deal with New Delhi. “We are certain that the government of Narendra Modi will continue to pursue a harmonious multidimensional policy, develop predictable and mutually beneficial relations with all countries, including Russia (it is also our goal) as well as the U.S.,” Antonov said’.

It may be mentioned that after the Galwan valley flare-up between India and China on June 15, 2020, in which India lost 20 soldiers, it was with the Russian help that Chinese returned 10 Indian soldiers, reported The Economic Times on July 6, 2020.

The views of Russian envoy, interestingly, have come after India had pulled from the Russian military drills – Kavkaz 2020, as China and Pakistan were also participants to it, and even if Russia had taken an exception. After all, it was Russian influence which got the Indian soldiers release from China while the US was found napping.

Owing to India’s overwhelming dependency on Russian arms and weaponry, in the last 50 years, ‘India not fully able to abandon Russia’ despite that in  ‘the last decade China has tried hard to cement the Russia-Pakistan ties (as) after the collapse of the Soviet Union in 1990, Moscow-Islamabad relations remained stable and mutually cautious until 2010.

From then on, relations began to change, leading to the lifting of a Russian arms embargo on Pakistan in 2014. Plus, there is an uncanny understanding between Russia and China that any attack on any of them would be considered an attack on both.

Russia is now almost an equal friend of Pakistan and of course, has stronger ties with China. Russia has faced US and Israel in Syria, thrown a challenge to Greece and Israel in support of Turkey in the Mediterranean, and is equally involved in providing the bulwark of diplomatic help to China.

It is in these political circumstances that India is needed to pave the way, and it is here, the proposed QUAD formation becomes all the more important for India. The formation of QUAD will be decided after November US elections, as thereafter, geo-politics is expected to undergo some rapid and extreme changes.

Penned By Haider Abbas: The writer is a former UP State Information Commissioner. He writes on international affairs. Views Personal