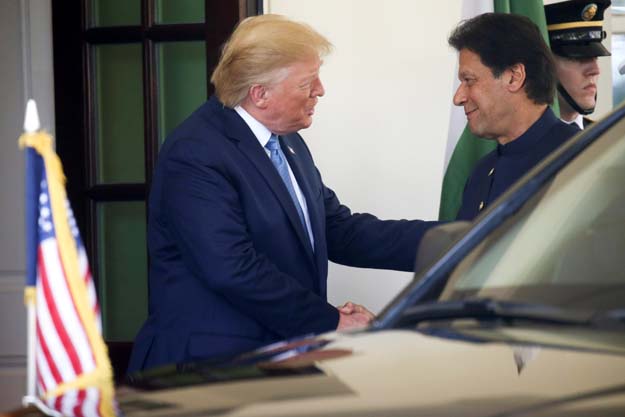 “If I can help, I would love to be a mediator,” Trump said at the White House, where he was hosting Prime Minister Imran Khan. “If I can do anything to help, let me know.”

President Trump said the US is willing to invest in Pakistan and sees great trade relationship between the two countries. He also said that the US is working with Pakistan to end the war in Afghanistan.

Trump held out the possibility of restoring US aid to Pakistan, depending upon what is worked out, and offered assistance to Islamabad in trying to ease strained ties with India. “I don’t think Pakistan respected the United States” in the past, Trump said, but “they are helping us a lot now,” Trump was quoted by AFP as saying.

President Trump received PM Imran Khan at the White House on Monday. A senior US admin official has said ahead of meeting “US will press for concrete cooperation from Pak to advance Afghan peace process” & “deepen & sustain its crackdown against militants within its territory”. pic.twitter.com/a7ud5zXuZD

A host of issues are expected to be discussed by the two leaders as efforts will be made to improve bilateral relations which nose-dived following Trump’s infamous Jan 1 tweet.

Trump is also expected to accompany Khan on a tour of the White House, said Foreign Minister Shah Mehmood Qureshi. He added that it will give more time to “mingle and chat”. The visit will expand bilateral partnership on trade and investment as well as work toward peace in South Asia at large and Afghanistan in particular, reported Radio Pakistan.

“The purpose of the visit is to press for concrete cooperation from Pakistan to advance the Afghanistan peace process and to encourage Pakistan to deepen and sustain its recent effort to crack down on militants and terrorists within its territory,” a senior US administration official told Reuters.

The official, who spoke on condition of anonymity, said the United States wants to make clear to Pakistan that it is open to repairing relations if Pakistan changes how it handles “terrorists and militants.”

In Afghanistan, the official said, the peace process is at a critical point and Washington wants Pakistan “to pressure the Taliban into a permanent ceasefire and participation in inter-Afghan negotiations that would include the Afghan government.”

Trump wants to end US military involvement in Afghanistan and Pakistan’s cooperation will be essential to any deal to end the war and ensure the country does not become a base for militant groups like Islamic State.

With input by Reuters, AFP