Turkish President Recep Tayyip Erdogan on Sunday attended a ceremony marking the construction of a new naval warship for close-ally Pakistan, according to a report by Turkish media. In July 2018, Pakistan Navy had signed a contract for the acquisition of four MILGEM-class ships from Turkey.

According to the Turkish president, Turkey was one of only ten nations that could build, design, and maintain warships using national capabilities.  The warship commissioned for the Turkish navy is named TCG Kinaliada while the one being built for Pakistan is named MILGEM, the report on the Turkish website claimed. 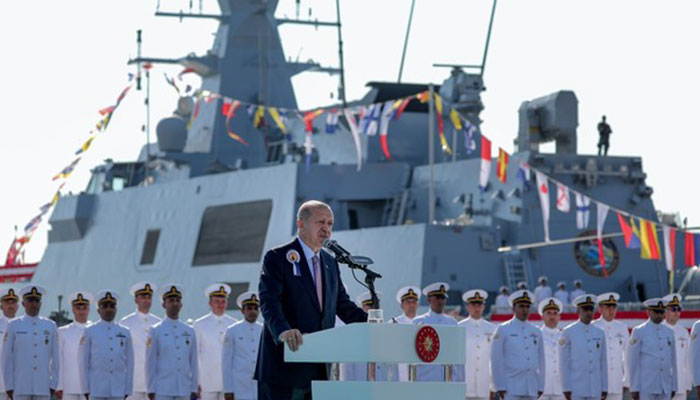 President Erdoğan speaks at the commissioning ceremony of the fourth domestically produced corvette TCG Kınalıada and the steel-cutting ceremony for the first MİLGEM-class ship to be sold to Pakistan. Photo: Daily Sabah

Speaking on the occasion, Erdogan said that he hoped that Pakistan benefited from the naval warship that was being provided to it by Turkey.

“Our navy, rich with glorious victories, is carrying this legacy into the future by further strengthening it,” he was quoted as saying. He added that Turkey was proud of the accomplishments of the defence sector.

Turkey Will Get Both Russian S-400 Missiles and American F-35 Jets: Erdogan

Turkey and Pakistan have signed nearly 60 defence cooperation agreements in recent years and their military consultation group, created in 2003, has been upgraded to a high-level cooperation council. Turkey has become Pakistan’s second-biggest arms supplier, after China.

Turkey, meanwhile, has shown itself as Islamabad’s most reliable ally, according to experts talking to EurAsian Times. Turkey was the only country that backed Pakistan in its effort to join the Nuclear Suppliers’ Group and when it was put on the ‘grey list’ by the Financial Action Task Force (FATF) last year.

Turkish military attaches from each branch of its armed forces have been posted in the Pakistani embassy in Ankara, and Ankara reportedly helped upgrade a batch of F-16 fighter jets for the Pakistan Air Force, manufacturing engines as well as spare parts, according to experts.

In 2018, Islamabad bought four MILGEM Ada corvettes from Ankara and 30 Turkish ATAK helicopters. The corvette sale was the largest single export in the history of Turkey’s defence industry, according to then-National Defence Minister Nurettin Canikli, while the ATAK deal was worth $1.5 billion.