Turkey has long lamented its inability to develop an indigenous long-range air defense system. Even after receiving Russia’s S-400, Turkey stated that it would not rely solely on foreign weaponry and will instead develop its own system.

Turkey is bolstering air defense capabilities amid threats from its rival Greece, which has recently announced its intention to buy F-35 stealth fighters besides the Eurofighter Typhoons.  Turkey was kicked out of the F-35 fighter program by the US over its acquisition of the Russian-made S-400 missile system.

Ankara began its program to develop surface-to-air missile (SAM) systems such as Siper and Hisar after many layers of deliberation.

Since the mid-2000s, Turkey has been seeking to increase its air defense capabilities and is looking to expand the range of missiles produced locally. Turkey has invested considerably in developing these weapons and wants to buy them for its military to establish an air defense umbrella for Turkey’s airspace.

Turkey’s efforts appear to be paying off, as the long-range variant of the Siper system was successfully test-fired, according to Anadolu Agency (AA).

Ismail Demir, the head of Turkey’s Defense Industries Presidency, tweeted that Ankara has achieved another milestone in building an indigenous long-range and multi-layered defense system.

He further stated that Turkey will continue to develop new weaponry, with up to six different air defense systems.

Turkey’s defense firms Aselsan, Roketsan, and the Scientific and Technological Research Council of Turkey are leading the Siper project. In addition to the Siper, which will complement the newly-acquired S-400 ‘Triumf’, Korkut, Sungur, and Hisar air defense systems have also been introduced.

Turkey is stepping up its efforts to develop a well-structured air defense shield in preparation for any potential challenges.

The difficulty with Turkey’s existing domestically produced missiles is that they do not meet the longer-range requirements. Once Siper is added to Turkey’s arsenal, the country’s air defense capabilities will be enhanced besides boosting the domestic defense industry.

The “Siper” project is a long-range SAM to be used in a battery of launchers networked linked to high-frequency radars. The purpose is to create a deployable air defense umbrella with a range of 150 km. At the same time, Turkey has built short-range missile systems as well. 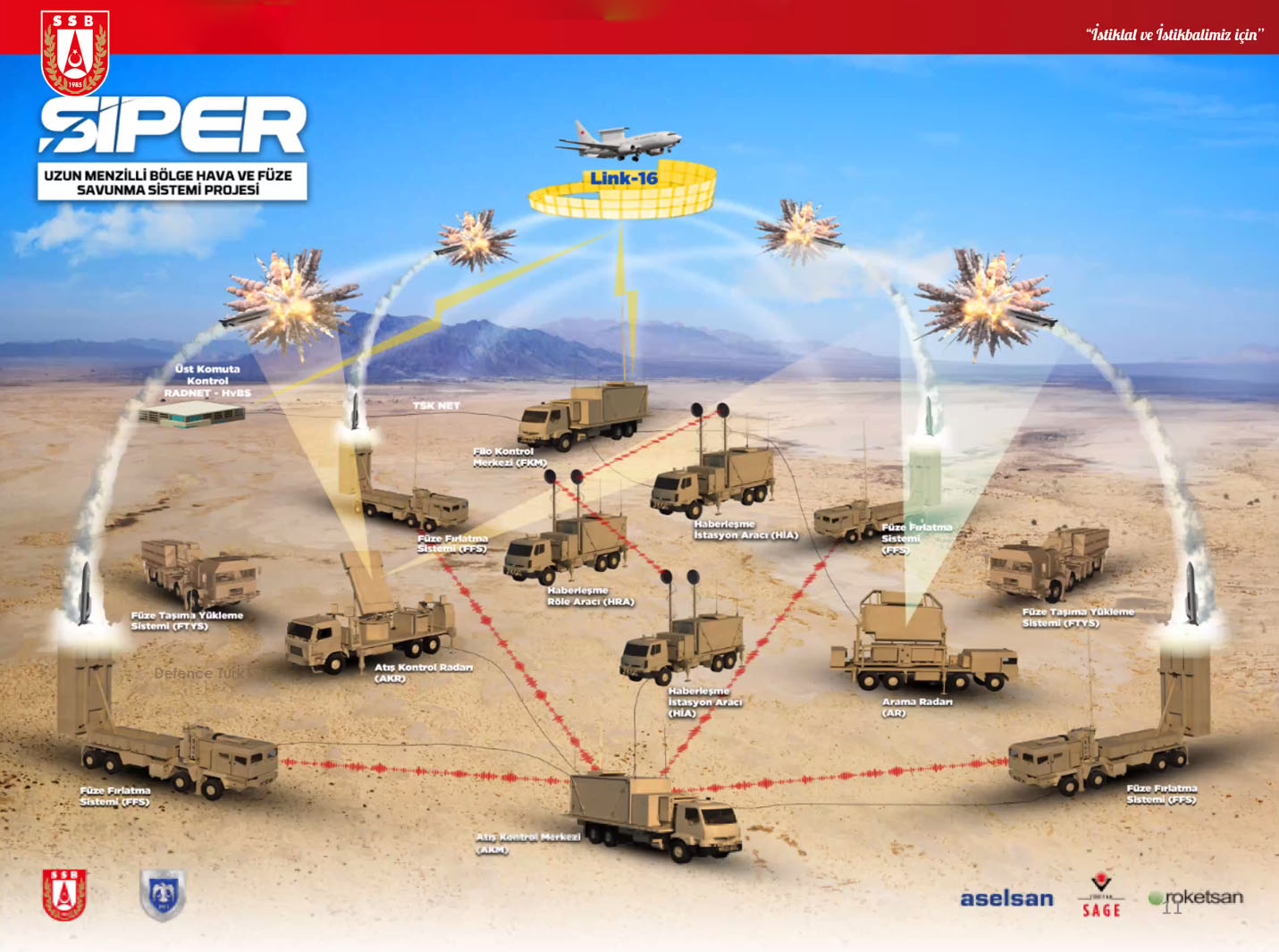 Turkish defense giant Aselsan made radars, the command and control system, and fire controls for the Hisar A+ system while Roketsan developed the missile. The weapon can identify and hit six targets simultaneously, owing to its 360-degree efficiency.

The range of the Hisar A+ system is 15 km (9.3 miles), while the Hisar O+ system range is 25 km. This missile system is capable of destroying planes, helicopters, cruise missiles, unmanned aerial vehicles, and air-to-ground missiles, among other aerial threats.

A video from the test launch of the HISAR-O medium altitude air defence system. pic.twitter.com/dWejmMhlGs

Sungur, another Turkish missile defense system, outperforms its peers in terms of efficacy, maneuverability, target-hit capability, and countermeasures. It features a titanium warhead and sighting capabilities, allowing it to see the target from a considerable distance.

The air defense system can fire while moving and has effective target recognition, diagnosis, identification, tracking, and 360-degree shooting capabilities at all times of day and night.

Initially, the Siper SAM system was projected to compete with the Russian S-400. However, with the Turkish military inducting the Russian-made system, the Siper is likely to play a secondary role.

Needless to say, the S-400 is considered one of the most lethal SAM systems in the world. It has already demonstrated its capabilities, and many countries have expressed interest the in missile system.

Siper, on the other hand, is still in the development phase and will take another two years before entering service.

As previously stated, Siper’s range is roughly 150 km, whereas the S-400 can kill airborne targets at distances of up to 250 km and intercept ballistic missiles within a 60-kilometer radius. Siper technical specifics have not been released yet, but it will cover a larger area than Hisar does.

Turkey has already acquired S-400s from Russia and is considering purchasing more. In July 2019, Ankara received the first Russian S-400 missiles. The second set of equipment arrived in August 2019.

Turkey was the first NATO member to purchase Russian-made air defense missile systems. The US and NATO as a whole have strongly objected to Turkey’s plan to acquire Russian-made S-400. The deal has invited US sanctions as Washington says that the Russian weapon is not compatible with NATO systems.

The US fears the existence of S-400 would compromise the high-tech F-35 stealth fighter jet. Subsequently, Turkey was kicked out of the F-35 Joint Strike Fighter program.

Recently, Turkey’s President Erdogan said Ankara is considering buying more Russian defense systems. This development implies that, while Turkey is developing its own long-range missile system, it has placed a high amount of trust in Russian weapons.

The tensions between Turkey and Greece linked to territorial disputes have resulted in an arms race; Ankara has already acquired the S-400, whereas the Hellenic Air Force is banking on the French-made Rafale jets and upgraded F-16s.

Following its ouster from the F-35 program, Turkey is left with no option but to strengthen its air defense shield. As The Eurasian Times reported earlier, Greece has openly announced its intention to purchase Lockheed Martin F-35 combat fighters.

Greece is believed to be attempting to neutralize the threat posed by Turkey’s S-400 anti-aircraft system while Turkey intends to dominate the region with its growing domestic defense capabilities and by acquiring state-of-art defense systems like the S-400s.