Lalleshwari or Lal Ded (Lalla Ded) – A famous Kashmiri mystic poet revered by all the religions in Kashmir is set to get country-wide recognization. The UGC is set to launch ten women-centric academic chairs in different universities which includes the name of Lalleshwari or Kashmir’s own Lal Ded meaning Mother Lalla.

Other names besides Lal Ded include the name of freedom fighter and poet Mahadevi Verma, singer M.S. Subbulakshmi and Maratha queen Devi Ahilyabai Holkar among others.

The chairs will be established by The University Grants Commission in association with the Ministry of Women and Child Development, which will provide the financial support.

Lalleshwari lived in the Kashmir during the 14th century. She is also known by other names and most famously as Lal Ded or Lalla. She was born in 1355 in Pandrethan in a Kashmiri Pandit family.

Lal Ded had clear memories of her past incarnations. Even as a child, Lalleshwari was wise and religious. She was married at a young age, into a traditional Kashmiri family. Her husband and mother-in-law had a very stringent view on her spiritual cravings. 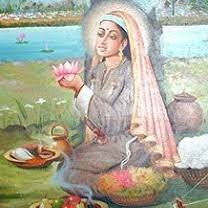 Her in-laws lived in Pampore. They gave her the name Padmavati. Her mother-in-law was very wicked and never allowed her to live harmoniously. Her mother-in-law used to put a stone on Lalla’s plate and would then cover the stone with rice so that people would get the impression that Lalleshwari is having a plateful of rice. Most of the times, Lal Ded would remain half-fed, but would never protest. For Lalleshwari, there was no happiness either from her husband’s side or from her cunning mother-in-law.

Lal Ded used to spend time in meditation, without neglecting house-hold chores. But her long absence at river spot (where only she could obtain calm and peace) and love for solitude was mistaken. Once she stayed unusually longer at the river ghat and bringing the water-pot on her head.

The enraged husband hit the earthen pot with a stick at which it fell into pieces. But the water solidified as one piece and remained in its place. Lalleshwari later filled all the pot with it. Still, the water flowed, to form a stream. The stream formed a tank known as Lalla’s tank and was noticed even in early part of the 20th century. This extraordinary miracle established Lalla as a Siddha, and as the word spread, people from all villages came to see her for blessings.

When Lalleshwari was twenty-six she renounced family life and became a devotee of Lord Shiva. She would wander in the jungles, trying to find nook and corners to meditate, living on wild fruits and berries.

She got trained under various masters including Siddha Srikanth and Swami Paramananda Tirth. The very first direction was to interiorize her cognisance using special techniques.

Such was the passion of concentration with which Lalleshwari pursued her goal, that soon, this physical universe became just consciousness to her-sat-chit-anand-and she was this consciousness-all pervading, ever-new bliss of Eternal Spirit.

Her vast body of consciousness ould not be covered by any cloth, so she renounced all clothing and became the highest among ascetics, an avadhut. Lalleshwari later became a preacher going all around the Kashmir Valley, singing songs on enlightenment and about Lord Shiva, calling the Spirit of Heavenly Father to descend on man–just as Christ moved in the city of Galilee.

After becoming an avadhuta, when her husband came to see her and call her back home, Lalla replied: “There is no light like the Light of God, no pilgrimage like attunement with Him, no relative and source of happiness like the Lord. Cling to Him, love Him. He is your real benefactor. Your and my physical connection ends here.” Then she gave her husband a glimpse of his former lives and his connection with Lalla. By that experience and Lalla’s divine touch, he became a changed man.

The teachings of Lalleshwari are known as Lal Vakh or Vakyas. These Vakyas are transcendental, yet simple-and have the capacity to carry a seeker to the realms of divine height and have a taste of the consciousness which this great saint so readily manifested.

Manipur Leaders Declare Independence from India; Establish Government In Exile In The UK

Lalvakyani is the collection of poems by Lal Ded. It has since been translated into many languages worldwide. They touch the heart of the reader and clarify the complexities of spirituality-hidden in faith and tradition.

Ever one with Spirit, great Lal Ded converted her body into light in her last days, just like medieval Masters Kabir and Meerabai. She still resides in a body of consciousness and listens and replies to the call of truth seekers.

Among recorded history, she personally met Swami Vishnu Tirth-the great saint in the Shaktipat tradition in the present era, on the way to Kedarnath. She is ever in a state of sahaj-samadhi, and can manifest her physical form for the benefit of some devotee.

The greatest saint of the modern world, Paramahansa Yogananda, whose Kriya Yoga teachings not only make him stand as a systematizer of Yoga (like Patanjali of yore), but he also stands as a Jagadguru-guiding devotees, sadhaks, monastics and householders from all walks of life. He has written about the great Lalla in his classic Autobiography of a Yogi.

One of the patron saints of Kashmir, the 14th-century Lalleshwari (“Supreme Mistress of Yoga”) was a “sky-clad” Shiva devotee. A scandalized contemporary asked the saint why she observed nudity. “Why not?” Lalla replied tartly. “I see no men about.” To Lalla’s somewhat drastic way of thinking, he who lacked God-realization did not deserve the name of “man.” She practised a technique, closely allied to Kriya Yoga, whose liberating efficacy she celebrated in numerous quatrains.

Undergoing no mortal death, the saint dematerialized herself in fire. Later Lal Ded appeared before her grieving townspeople, a living form enwrapped in golden robes-fully clad at last!

With Invaluable Inputs From The Daily Excelsior

The Pakistani Army’s long wait for attack helicopters could soon be over as reports indicate that Islamabad might be inching closer to a deal...
Read more
Load more