The US Air Force B-52H Stratofortress is a long-range, heavy bomber and is capable of conducting a wide range of missions. Latest reports reveal that a B-52H was involved in an accident at Barksdale Air Force Base in Louisiana.

The bomber provides the US Air Force with immediate nuclear and global strike capabilities. Boeing claims that the B-52 is a great contributor to the US National Security Strategy owing to its high mission completion rate, large payload, long-range, persistence, as well as its ability to employ both nuclear and conventional precision standoff weapons.

The Stratofortress, also known as ‘Buff’, is very large in size, with a length of 48.5 m and a take-off weight of 220,000 kg. When on the ground, the surface of the aircraft on the front section of the fuselage has some sort of a wrinkled appearance.

As the aircraft gains altitude, this skin is expanded and becomes smooth as the crew compartment is pressurized.

The bomber made its first flight in 1952 and celebrated its 50th anniversary in April 2002. The B-52 is known to be the longest-serving combat aircraft in the world. The Stratofortress entered service with the US Air Force in 1961 and the last aircraft was delivered to the service in October 1962.

The USAF currently has 76 B-52H bombers in service, along with a small number of additional surplus airframes at the boneyard at Davis-Monthan Air Force Base in Arizona.

Recently, the Air Force announced a series of upgrades to the aircraft for increasing their life expectancy by a few more years. As EurAsian Times previously reported, the USAF selected British automobile giant Rolls Royce for powering the B-52H bombers with its F-130 Turbofan engine.

This upgrade is expected to increase the aircraft’s service life beyond the year 2030.

During a conventional conflict situation, the Buff is capable of performing a number of missions such as strategic attacks, close-air support, air interdiction, offensive counter-air and maritime operations. During Operation Desert Storm, 40 percent of all weapons dropped by coalition forces were delivered by B-52 bombers.

This aircraft proves to be a great boon to the service as it is highly effective for conducting ocean surveillance. It can also assist the US Navy in conducting a number of anti-ship and mine-laying operations.

In a span of two hours, a pair of B-52H bombers are capable of monitoring 364,000 km of the ocean surface. Every B-52H bomber can be equipped with two electro-optical viewing sensors, a forward-looking infrared and advanced targeting pods to augment targeting, battle assessment and flight safety, further improving its combat ability, according to the US Air Force fact sheet.

B-52 Involved In Accident

According to the latest reports, a US Air Force B-52H bomber has suffered ‘significant’ damage in an accident at the Barksdale Air Force Base in Louisiana on November 12.

While details of the incident have not been revealed yet, reports suggest the right-wing of the aircraft hit a fence while it was being positioned for a static display as the driver of a tow misjudged the distance between the plane’s right-wing and a metal perimeter fence, DailyMail reported. 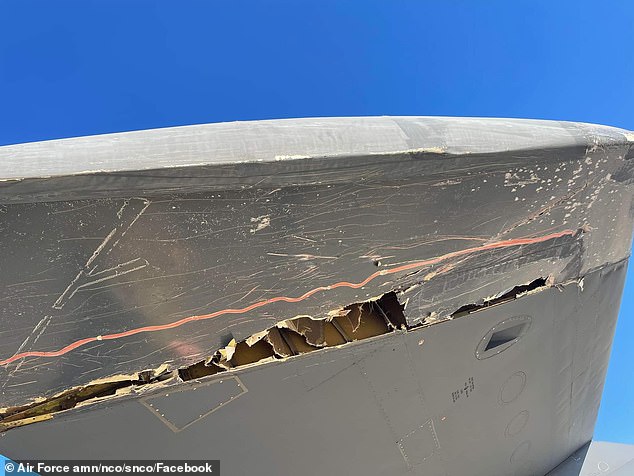 The metal fence penetrated through the skin of the aircraft, puncturing its right-wing tip, and caused structural damage.

A photograph of what seemed to be a redacted Maintenance Operations Center (MOC) Notification Worksheet regarding this incident appeared on Facebook on November 12. Barksdale Air Force Base’s public affairs officials confirmed to The War Zone that an incident involving the B-52H bomber occurred at the base.

However, no further information was revealed by them. The Barksdale Air Force Base is home to the service’s active-duty 2nd Bomb Wing and the Air Force Reserve’s 343rd Bomb Wing.

“While positioning the aircraft for static display on the site, the aircraft collided with the fence directly in front of the MXG [maintenance] building”, the notice, which says it was submitted by the 2nd Aircraft Maintenance Squadron (2 AMXS), reads.

“No personnel were reported injured. All pieces were recovered from the fence and the aircraft and there is significant damage to the right-wing tip and the leading-edge wing outboard of the right external tank”, it further explained.

There is no information about the static display of this aircraft. According to reports, bombers present at this base are regularly put on display for the public. The actual extent of damage caused to this aircraft is yet to be evaluated, however, if the damage is really significant, its repair can be costly as well as time-consuming for the service.

Previous article
Equipped With Armed Drones, Russia Says Its Stealth Fighter Jet – Checkmate Will Be Ready For First Flight By 2023
Next article
As Biden Meets Xi, Taiwan Fears China’s ‘Gray Zone’ Strategy Can Choke The Island By Blocking Its Access To Harbors & Airports