While there are a lot of aviation photographers who have captured some of the most mesmerizing images of a fighter jet,  there are very few which would have captured a supersonic jet with this clarity. As it is said, an image is worth a thousand words.

Why The World’s Best Tank – The American M1 Abrams – Needs An Urgent Replacement?

One such shot, captured by photographer Dave Honan, surfaced over the internet recently and has made everyone appreciating his work.

Who needs a wind tunnel when there's moisture in the air?#avgeek #physics #growler #flynavy pic.twitter.com/x1XeQQNoiE

The image is of an EA-18G Growler electronic attack aircraft belonging to the Electronic Attack Squadron 130 (VAQ-130) “Zappers”, based at Naval Air Station Whidbey Island, Washington, flying low and fast on Visual Route 1355, one of the low-level routes running through national parks in the Cascade Mountains.

The place has been called a “million-dollar ride” for its scenic views and fun flying, and one can see EA-18 and F-15 crews doing low passes through the national park. The Cascade Mountains are a popular site for visitors to witness fighter jets from up close.

“I enjoy venturing into the Cascade Mountains in search of jets running the low-level training routes,” Dave said in a message to The Aviationist.

“There’s always a high likelihood that I won’t capture anything — the route corridors average ten miles wide — but sometimes I manage to be in the right place at the right time. This particular jet has its afterburners lit, probably to gain energy in preparation for climbing out of the deep valley it’s flying through. That’s relatively rare to see, and makes the image even more dramatic.”

The company claims that the Growler “is the most advanced airborne electronic attack (AEA) platform and is the only one in production today.” It is an electronic attack variant of the twin-seater F/A-18F Super Hornet, replacing the EA-18B Prowlers in the US Navy service. It is manufactured by Boeing.

Along with the United States, Growlers are also in service with the Royal Australian Air Force, which currently operates 11 of such aircraft. It is the only military other than the U.S. to operate Growler’s electronic jamming equipment. 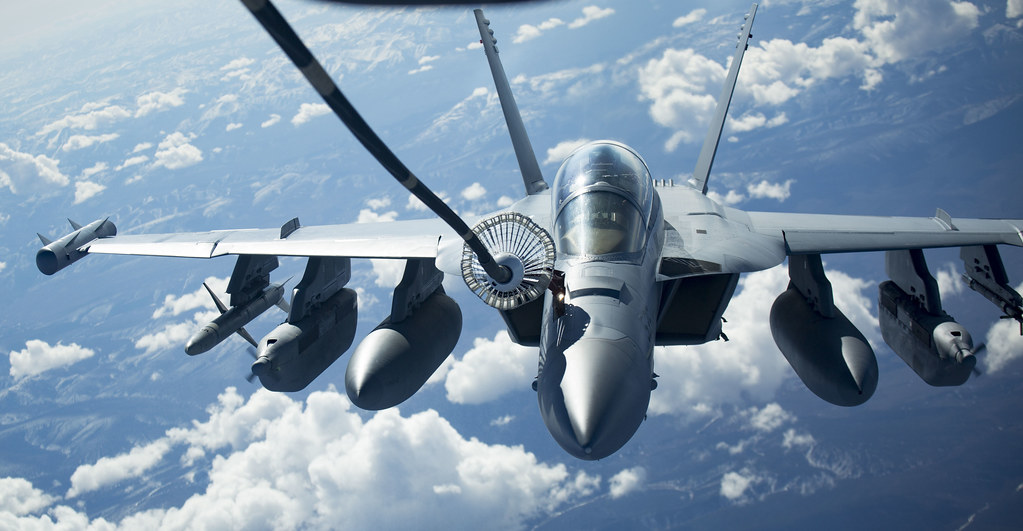 The aircraft, although being very similar to the Super Hornets, are easily identifiable due to the wingtip-mounted AN/ALQ-218 electronic warfare pods. The aircraft carries several other key sensors and pods as well, enabling it to effectively perform ISR missions, and has an AESA radar.

For its protection, it can carry AIM-120AMRAAM and AGM-88 HARM missiles, and can also carry the AGM-154 Joint Standoff Weapon- which is a medium-sized precision-guided glide bomb.

The EA-18 has seen combat over Libya, Iraq, and other battlefields over the Middle East.