The presence of surveillance drones in Tibet continues to display Chinese assertiveness in the region. Amidst these developments, India and the US have begun a two-week-long joint military exercise in Alaska.

The 17th edition of  Indo-US military exercise Yudh Abhyas commenced at the Joint Base Elmendorf-Richardson, Alaska (US). 350 soldiers from the Indian Army’s 7 Madras Infantry Battalion Group participated alongside 300 US Army personnel belonging to First Squadron (Airborne) of the 40th Cavalry Regiment.

The two-week exercise will see joint training in counter-insurgency and counter-terrorism (CI/CT) operations under the United Nations mandate. The aim of this joint exercise is to impart best practices and better ensure jointmanship between both militaries which face a common adversary in the face of shifting geopolitical priorities.

“This week, we will, quite literally, summit mountains together,” said U.S. Army Col. Jody Shouse, commander of the Spartan Brigade. “But most important are the relationships we build here. Those unique bonds formed between soldiers and partners that train and endure hardships together.”

Training will include cold weather survival, medical evacuation by air, mountaineer training, small-arms marksmanship, and a field training exercise in the mountains of JBER.

“I want to thank the governments of our two nations for taking the initiative of bringing us together,” said Indian Army Brigadier Parag Nangare, exercise director and commander of 136 (I) Infantry Brigade Group. “We have a lot to learn from each other, especially in handling the modern-day global challenges.”

Images of at least two CH-4 Unmanned Aerial Vehicles (UAV) at the Ngari Gunsa Airport in Tibet have been circulating on Twitter. These indicate that the People’s Liberation Army (PLA) has been carrying out Intelligence Surveillance Reconnaissance (ISR) missions in the area.

A senior Indian Army officer told the EurAsian Times on the condition of anonymity, that Chinese assertiveness in the region signals PLA’s ‘show of strength’ and serves as a warning for India.

The CH-4 is built by China Aerospace Long-March International, a division of the state-owned China Aerospace Science and Technology Corporation (CASC). The CH-3 and CH-4 propeller-driven drones are essentially Chinese versions of the Predator and Reaper, respectively, and have similar capabilities, with a price tag of around $4 million.

Speaking about why CH-4s were potentially chosen for recon missions in Tibet, military author and defense analyst Joseph P Chacko said, “the CH-4A UAV has a large wingspan and is suited for Chinese-occupied Tibet’s wind and weather conditions.

It is more likely to take off with a full reconnaissance payload effectively. It is likely to have 20-25 hours of recon endurance over the area. The same cannot be said about the CH-4B, which is a recon-armed variant.”

“China employs air and space-based reconnaissance in Tibet but has more control over the duration and location discretion with UAVs. India is already using surveillance UAVs in the region with great effectiveness,” Chacko added. 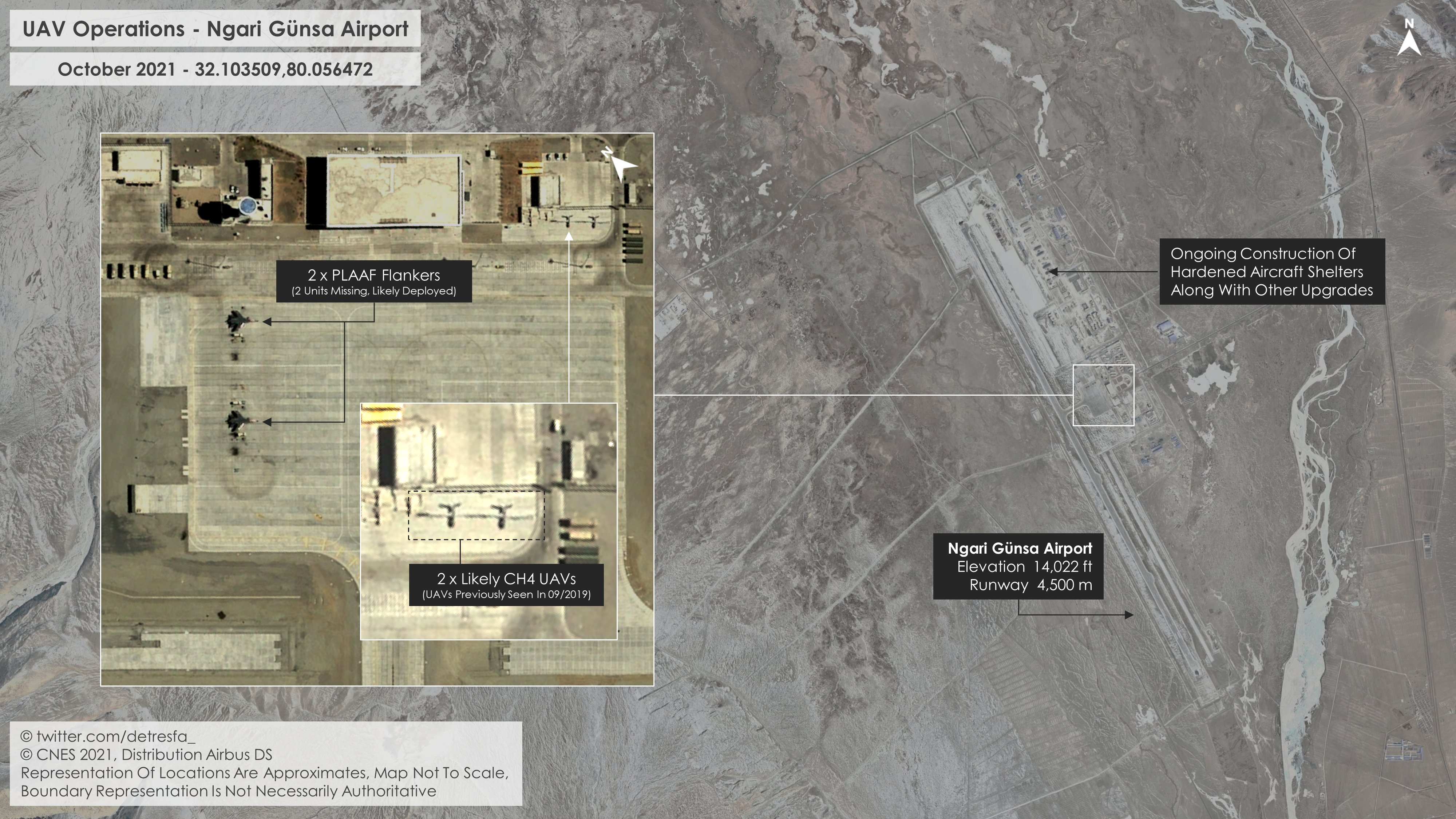 Citing satellite images shared by open-source intelligence, The EurAsian Times had also reported on the presence of CH-4 drones in Pakistan’s Punjab province.

The US MQ-9 Reaper, also known as Predator-B, is in service with militaries of the US, the UK, Italy, France, and Spain. Developed by GA-ASI, the remotely piloted aircraft (RPA) is designed to comply with the STANAG 4671 NATO standards.

Powered by a Honeywell TPE331-10 turboprop engine, the UAV can hold a maximum payload of 1,746kg, including an external payload of 1,361kg. It is capable of carrying multi-mission payloads such as EO/IR systems, Lynx multi-mode radar, multi-mode maritime surveillance radar, electronic support measures (ESM), laser designators.

The EurAsian Times has previously reported that the Indian armed forces currently lack indigenous combat drones. The country has at least a decade of technological asymmetry with China.

India’s indigenous UCAV projects like the Ghatak under the aegis of the Defence Research and Development Organisation (DRDO) are still years away.

With this asymmetry, India is looking at a contract worth $3 billion for the procurement of 30 MQ-9B combat drones. Once inducted, they are expected to bolster the offensive and surveillance capabilities of the Indian armed forces.

The proposed induction of the MQ-9Bs would give India the distinction of being the only non-NATO country to receive these combat drones from the US.

India’s interest to procure MQ-9Bs was first shown in 2019, under the Trump administration, which had approved the sale. Also called Reaper or Predator-B, these drones have been used by the US military and the Central Intelligence Agency (CIA) in conflict zones.

Indian PM Narendra Modi recently met with General Atomics Chief Executive Officer Vivek Lall as part of a three-day visit to the United States. The company manufactures the MQ-9 Reaper drones, which the Indian armed forces are set to procure.

“The involvement at the highest level for what appears to be the acquisition of UAV-related technologies is suggestive of a realization of our increasing vulnerabilities gap. It’s hoped that the significant software and skill capabilities of Indian industries could be leveraged to build future platforms and weapon systems,” Rear Admiral Vineet Bakhshi (Retd) told the EurAsian Times.

Apart from deployment along the Line of Control (LOC) near Pakistan these drones could also be used on the Ladakh frontier where Indian and Chinese troops have been locked in a standoff for more than a year.

Additionally, the Indian Navy could deploy them as a reconnaissance and potential offensive tool against any misadventure in the Indian Ocean Region (IOR) by the Chinese PLA Navy (PLAN).

“India is not about to fight a full-scale war for remote places where, as the first Prime Minister of India Pt Jawaharlal Nehru said, ‘not a blade of grass grows’. The Chinese are well aware that India is ready to ‘defend’ but not ‘fight’ for that place, opined Chacko.

“The political leadership in India has shown a steady decline too. PM Nehru was brave enough to start a war, but he lost. Rajiv Gandhi was gutsy enough to land troops beyond Chinese deployment. PM PV Narasimha Rao found, to his dismay, that Indian diplomats actually faxed for permission from the Chinese to approve his visit to Arunachal Pradesh. Dr. Manmohan Singh did well by diplomacy and leaving the borders to the Army leadership,” Chacko continued.

“PM Narendra Modi just caved in. Modi let the Russians dictate the tactical response and is batting for undetermined help for the United States strategically,” said Chacko before signing off.

Former Research & Analysis Wing (R&AW) officer, author, and intelligence analyst, RK Yadav when asked about the likelihood of clashes along the LAC told the EurAsian Times, “I should clarify there would be no major clashes between both sides. This is diplomatically agreed but not disclosed in the media.”