Amid rising border tension between India and China alongside Beijing’s ambitious territorial claims in the South China Sea, the US has deployed two of its best aircraft carriers to counter the presence of the Chinese navy.

The Philippine Sea which is strategically located in the region that provides easy access to both the Taiwan Strait and the South China Sea is presently guarded by two of US’s supreme aircraft carriers, the USS Ronald Reagan and USS Nimitz Strike Groups to counter China’s growing presence in the region.

“We aggressively seek out every opportunity to advance and strengthen our capabilities and proficiency at conducting all-domain warfighting operations,” said Rear Admiral George Wikoff, commander of Carrier Strike Group 5.

“The U.S. Navy remains mission-ready and globally deployed. Dual carrier operations demonstrate our commitment to regional allies, our ability to rapidly mass combat power in the Indo- Pacific, and our readiness to confront all those who challenge international norms that support regional stability,” tells the Admiral.

Besides the general features, every U.S. aircraft carrier carries more than 5,000 sailors and over 60 jets and helicopters. Experts say that together, they can conduct potent, 24-hour flight operations.

“Only the U.S. Navy can integrate a carrier strike force on this scale and consistently project power to protect freedom of the seas,” said Rear Admiral James Kirk, commander of Carrier Strike Group 11, which is aboard the USS Nimitz.

He continues – “With more than 10,000 U.S. Navy Sailors from across the world working together as one cohesive team, these operations are what keep us ready to respond to any contingency.”

Recently, due to maintenance and repair issues, the US had deployed no carrier groups in the Western Pacific region. Analysts opine that China appears to have taken advantage of the lack of strong US presence as China stepped up its military presence in the region.

Experts speculate that the U.S. Navy seeks to re-establish its strong presence in the region and counterbalance China’s navy in the area by deploying the best of its machinery together. Previously, the U.S. Navy had deployed the dual-carrier groups operating together in the Philippine or South China Seas in 2018, 2014, 2009, and 2001.

China has threatened to impose sanctions on US defence giant Lockheed Martin – the makers of Stealth F-22 Raptors, in response to US approving of a possible deal for Taiwan to buy parts to refurbish defensive missiles built by the company.

Foreign Ministry spokesman Zhao Lijian made announced at a briefing in Beijing on Tuesday, adding that the US should cut defence ties with Taiwan “so that it doesn’t do further harm to bilateral relations and damage peace and stability in the Taiwan Strait.”

The US State Department last week approved a possible $620 million foreign military deal for Taiwan to buy parts of Patriot Advanced Capability-3 (PAC-3) missiles so that they can last 30 years.

Beijing’s actions come amid growing tensions between the US and China tensions over various issues including trade war, South China Sea dispute, COVID-19 pandemic, new security law in Hong Kong, 5G network and hostilities against key US allies including India and Australia.

Despite it being a strategic American ally, the US has no official embassy in Taiwan nor does Australia, Canada, the UK or Germany. China calls Taiwan a ‘renegade province’ and has vowed it to merge it with mainland China, at all costs.

NASA Comet Neowise India: NASA’s Neowise infrared space telescope discovered the comet on 27 March. Scientists involved in the mission said the comet is about five kilometres across and its nucleus is covered with sooty material dating back to the origin of our solar system 4.6 billion years ago.

The Comet Neowise, or C/20202 F3  will be noticeable in the northwest sky in India from 14 July onwards. As per NASA, Neowise should be visible just before and around the time of first light till 11 July. It will again start to be visible in the evening between 15 and 16 July.

“From July 14, C/2020 F3, a comet discovered on March 27, will be clearly visible in the north-western sky. It will be visible after sunset for around 20 minutes for the next 20 days. People can observe it from naked eyes,” said Subhendu Pattnaik, deputy director of Pathani Samanta Planetarium in Bhubaneswar told ANI.

“In the evenings to follow, the comet will rapidly climb higher in the sky and will be visible for a longer period,” he added.

Comet Neowise swept within Mercury’s orbit a week ago. Its close vicinity to the sun caused dust and gas to burn off its surface and create an even bigger debris tail. According to CNET, Neowise passed a critical point when it survived its closest brush with the sun without cracking up from the heat last week.

NASA’s Neowise infrared space telescope discovered the comet on 27 March. Scientists involved in the mission said the comet is about five kilometres across and its nucleus is covered with sooty material dating back to the origin of our solar system 4.6 billion years ago.

Last night I scoured Google Earth lining up roads that would matched the bearing of where the comet would rise this morning. Finally found a spot along my favorite road in Wupatki National Monument and narrowed to this creviced bend to work with. #neowise #cometneowise 1/ pic.twitter.com/zI3TkVlv1H

While it’s visible with the naked eye in dark skies with little or no light pollution, binoculars are needed to see the long tail, according to NASA. It will be about 7,000 years before the comet returns, “so I wouldn’t suggest waiting for the next pass,” said the telescope’s deputy principal investigator Joe Masiero of NASA’s Jet Propulsion Laboratory in Pasadena, California.

Recently, astronauts from the International Space Station managed to get a stunning glimpse of a natural light show from a comet this weekend. NASA astronaut Bob Behnken shared a tweet highlighting Neowise. He captioned the post, “Last night’s fireworks, for real. Because Science.”

Ties between US and China could dramatically worsen over the South China Sea after Secretary of State Mike Pompeo said Washington now regards virtually all Chinese maritime claims outside its internationally recognised waters to be illegitimate. 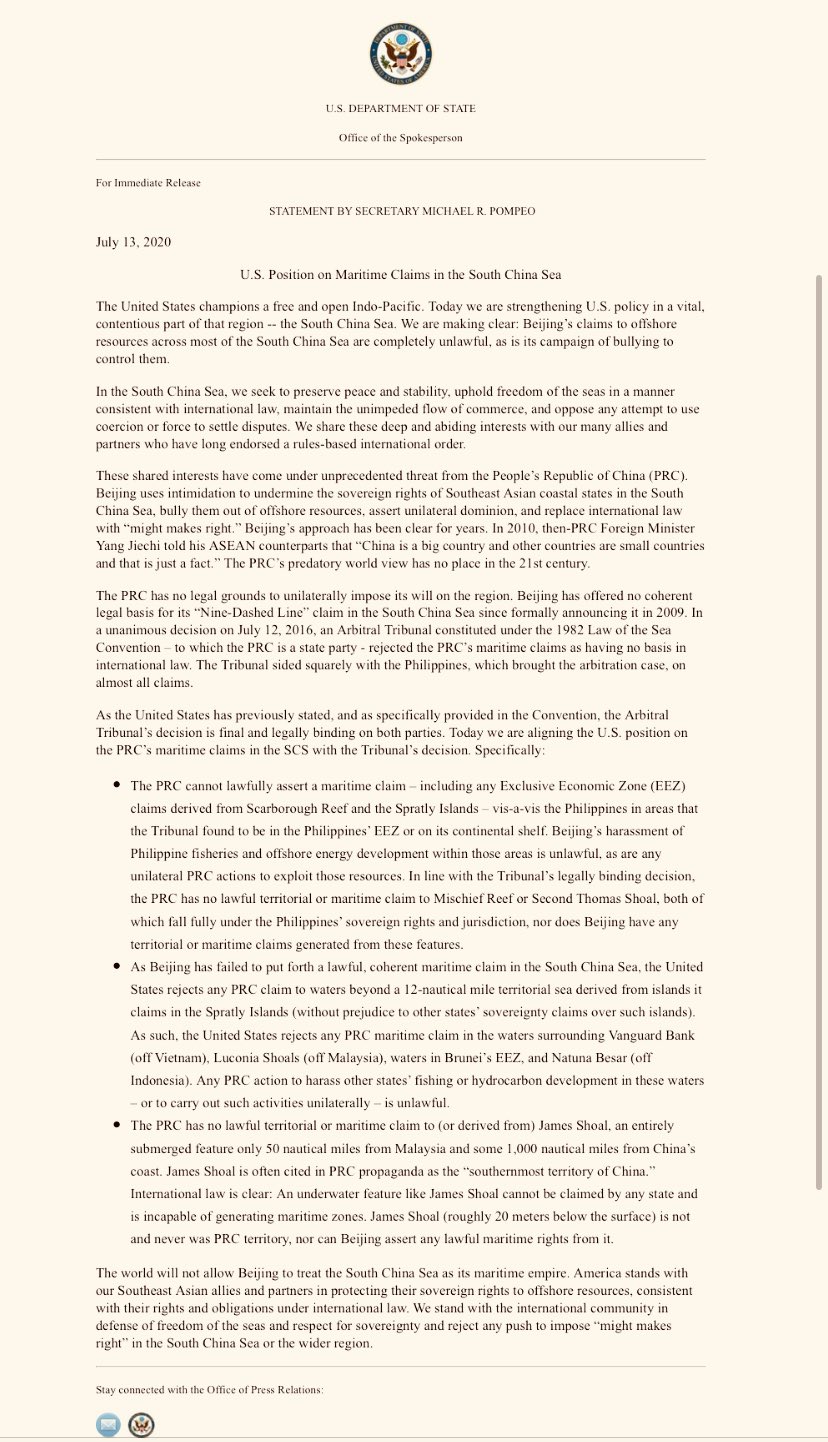 Three soldiers of Pakistan Army were killed and eight others, including an officer, were injured in an ambush on their...

Azerbaijan-Armenia Border Clash conflict commenced on Sunday and Azerbaijan said it has lost 11 soldiers and one civilian while Armenia... TOI quoting senior officials at the Indian embassy in the Iranian capital said, “India is committed to building the Chabahar-Zahedan...