The command of the US Armed Forces in the Mediterranean region said that on April 15, a Russian Su-35 multi-role fighter jet “went on a dangerous maneuver” next to the  P-8A Poseidon aircraft and violated international laws. 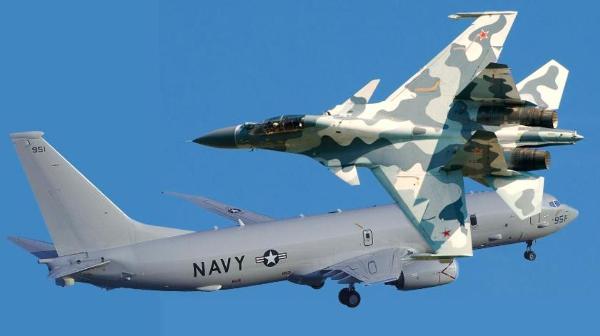 “The duration of the interception was approximately 42 minutes,” – said in a statement to the command of the 6th operational fleet of the US Navy.

On April 15, 2020, a U.S. P-8A Poseidon aircraft flying in international airspace over the Mediterranean Sea was intercepted by a Russian SU-35. The interaction was determined to be unsafe due to the SU-35 conducting a high-speed, inverted maneuver, 25 ft. directly in front of the mission aircraft, which put our pilots and crew at risk. The crew of the P-8A reported wake turbulence following the interaction. The duration of the intercept was approximately 42 minutes.

While the Russian aircraft was operating in international airspace, this interaction was irresponsible. We expect them to behave within international standards set to ensure safety and to prevent incidents, including the 1972 Agreement for the Prevention of Incidents On and Over the High Seas (INCSEA). Unsafe actions‎ increase the risk of miscalculation and the potential for midair collisions.

The U.S. aircraft was operating consistent with international law and did not provoke this Russian activity.

According to the US military, the incident transpired in international airspace over the eastern part of the Mediterranean Sea. Experts states that the US Navy closely monitors Russian military activity, primarily at the two bases of the Russian Armed Forces in Syria – the naval Tartus and the Khmeimim air force base.
Previous articleIsrael Lauded For Handling Covid-19 Pandemic; Patients Show 100% Recovery: Reports
Next articleIslamabad Appreciates Debt Relief Package For Pakistan; FM Qureshi Calls It ‘Substantial’

The Indian Air Force (IAF) will be taking part in a multi-nation air combat exercise, Desert Flag, in the United Arab Emirates (UAE) in...
Read more

The proposal for a high-speed railway and expressway connecting mainland China with Taiwan is likely to be discussed during China's National People’s Congress that...
Read more
Load more