Despite ‘constructive talks’ between India and China at SCO summit, it appears that tensions have not really eased down and Beijing continues to build pressure on India by conducting provocative military drills and bolstering communication.

As per reports in Indian media, Chinese troops are reportedly laying a network of optical fibre cables near trigger pints which clearly implies that PLA is digging in for the long haul. Such cables, which would provide forward troops with secure lines of communication to bases in the rear, have recently been spotted to the south of Pangong Tso lake in Ladakh, TOI quoted a government official. Earlier, Beijing released a video of military drills by the People’s Liberation Army (PLA) showcasing its latest ground strikers and rocket launchers. At a time when India and China are engaged in a border standoff at the Line of Actual Control (LAC), the video shows the PLA is still preparing for high altitude warfare.

According to a report by SCMP, it was the first time that air-ground joint exercise was conducted “at an average altitude of 5,000 metres (16,400 feet).” The Tibet military command and the latest ground strikers of the Chinese air force in Tibet practised air-ground joint assault and control of enemy-occupied grounds.

The report further noted the “army’s reconnaissance unit using drones to conduct aerial scouting of the drill “enemy’s” position and sending the coordinates back, while the ground special reconnaissance team climbed cliffs and crossed canyons to go behind the enemy’s defence to provide artillery groups with strike coordinates.” 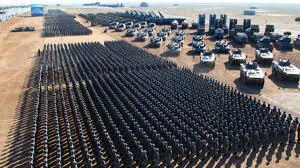 It also showed the use of electronic warfare units for the first time, which are deployed to hinder the enemy’s communication. It doesn’t mention when the exercise was conducted.

“It can improve the coordinated ground attack with the army units as it can stay in the air longer,” Song said. Zhongping added that such exercises were routine drills for the Chinese military on the Tibetan Plateau, however, this the first time that video of an army-air force joint exercise was officially released on TV.

The report further added that the gold-lion painting on the fighter indicates that the jet likely belongs to the “elite air force brigade based in neighbouring Gansu province known as the “Helan Flying Lion” because the brigade is stationed at the foot of Helan Mountain.”

Type 15 light tanks and Type 04 infantry fighting vehicles were also shown as the main assault force to attack from the front.

PLA is training attacking tanks in Tibet region. Yes, it targets China-India border situation. China hopes the five-point consensus reached between the two foreign ministers can be implemented, but is ready to strike a heavy blow to Indian troops if they refuse to implement it. pic.twitter.com/azlPwVPJt6

India and China have been involved in a violent clash in border skirmishes. The first one in the Galwan valley resulted in the death of 20 Indian troops. The recent clash took place at the southern bank of Pangong Tso.

The Indian Army stated that the “provocative military movements” were carried out by Chinese troops, while the Chinese PLA demanded the “Indian side to immediately withdraw its troops that illegally trespassing the border-line.”

This clash wasn’t as severe as the one in June but shots were fired in the air, which was the first instance in the last four decades.