Russia has reportedly made another major breakthrough in boosting its missile launching capabilities with modernised BM-30 Smerch or 9A53-S Tornado multi-lead rocket launchers with increased strike range to 200 kilometres.

According to local news reports, the Russian Defence Ministry has published the results of the latest missile test which confirms the improvements in the range of the target hitting capabilities of the Soviet Heavy Multiple Launcher.

The GNSS portal enables the Tornado missile-launch systems to fight dispersed sub-units of the enemies in a single salvo of missiles.

All that is to be done is to set the preferred range and azimuth angle (compass direction from which the sunlight comes) individually for each of the missiles fired. The launch-systems pre-determine the trajectory of the missiles when launched with each of them aiming to hit a specific target using GNSS.

The 9A53-S Tornado or Tornado-S is a deep modernisation of the BM-30 Smerch heavy rocket launcher systems, comprising of a carrier in the form of a KamAZ-63501 military truck with 300 mm multi-lead or unguided rocket launcher mounted on it. 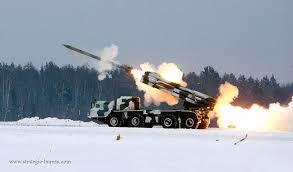 The modernisation of the launchers enabled the increase in overall range as well as reducing the time window needed to swiftly change from the transport position to combat readiness and change of the combat position.

Moreover, the Tornado-S also had an increase in the rate of fire and is also equipped with the ability to use intelligent and programmable ammunition.

Designed in the early 1980s, the BM-30 Smerch, which is also referred to as “Whirlwind” entered service in the Soviet Army in 1989.

The missile-launch systems have been specially designed to an army-level commander the ability to strike targets deep behind enemy lines which include enemy headquarters, airfields, forward assembly areas, supply dumps and other targets.

The systems are also capable of swiftly laying down minefields with rockets with mine submunitions.

Along with the modernisation of the BM-30 Smerch to Tornado-S level, the Russian Army is currently working on modernizing its BM-21 Grad, BM-27 Uragan systems to the standards of 9A53-G Tornado-G and 9A53-U Tornado-U.