In a video that has gone viral on social media, Indian PM Narendra Modi appears to be ‘lonely and isolated’ while Imran Khan is seen well-engaged in a conversation with Russian President Vladimir Putin during an official dinner of the recently concluded SCO summit in Bishkek, Kyrgyzstan. 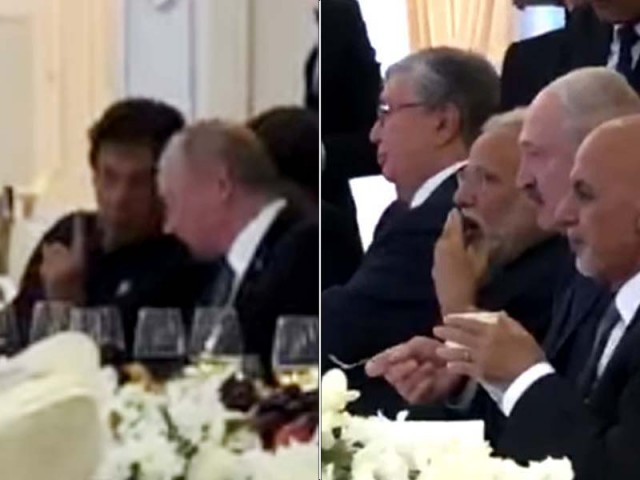 In the video – posted by Mohan Guruswamy, a user who heads the Centre for Policy Alternatives – world leaders can be seen engrossed in friendly conversation while relishing their food.

Modi, who sat with Afghan President Ashraf Ghani, however, seems ‘aloof and disinterested’ in the session. “Our maximum leader is seated between the Tajik and Belarussian presidents and is entirely focused on preparing for the world Yoga day. Look at Imran engaging Putin in a conversation,” Guruswamy wrote on Facebook.

Other users also took a swipe at the Indian leader.

While one said he was “missing his prompter and written speech without that he cannot talk,” another commented: “One can’t help feeling bad for him, however despicable he is.”

“No TelePrompTer no talk!” said another.

Some social media users commended PM Imran for his inclusiveness at the dinner.

“You feel Imran is a world leader,” wrote Vinod Sharma.

Commenting on this, Ashok Swain, a professor of peace and conflict research at a European university, asked his social media followers the reason behind the difference in treatment the two leaders received in the Central Asian state.

In response, some really ‘insightful’ commentary was made on the post.

Our maximum leader is seated between the Tajik and Belarussian presidents and is entirely focused on preparing for the world Yoga day. Look at Imran engaging Putin in a conversation.