In August, China tested two of its “Aircraft-Carrier” killer missiles which successfully hit moving targets before traveling thousands of kilometers to reach them, a Chinese military expert revealed to the South China Morning Post.

According to the reports, it is the first time the country’s military has revealed the details of its missile launches. The launches were earlier confirmed by the United States military too.

The two missiles, namely the DF-21D and DF-26B, successfully met their operational parameters and hit their targets. Back in August, it was reported that the missiles failed and had dropped into the South China Sea.

However, these claims are contradicted by Wang Xiangsui, a former senior colonel who now works as a professor at Beihang University in Beijing.  One of the missiles, a DF-26B, was launched from the northwestern province of Qinghai, while the other, a DF-21D, lifted off from Zhejiang province in China’s east.

Purportedly, the launches were made after an American U-2 Spy Plane intruded into the Chinese No-Fly Zone when the PLA Navy was conducting live-fire drills in the Bohai Sea.

“So several days later [after the aircraft carrier maneuvers], we launched the DF-21 and DF-26, and the missiles hit a vessel sailing south of the Paracel Islands,” the colonel said.

“Shortly after that, an American military attaché in Geneva complained [to us] and said it would lead to severe consequences if the missiles hit an American aircraft carrier. They see this as a show of force. But we are doing this because of their provocation,” he added.

The colonel also added that these launches are a direct warning to the United States over its deployments of USS Ronald Regan and USS Nimitz in the region. These came at a time when tensions among both countries skyrocketed to an all-time high in the second half of 2020.

The induction of DongFeng 21 was a major milestone achieved by the PLA. It has been attributed to a major change in Naval Warfare, with extensive observations, analysis, and intelligence gathered on the system which, in theory, could render the usage of aircraft carriers obsolete.

In 2009, the United States Naval Institute stated that such a warhead would be large enough to destroy an aircraft carrier in one hit and that there was currently’ no defense against it” if it worked as theorized.

The United States Navy has responded by switching its focus from a close blockade force of shallow water vessels to return to building deepwater ballistic missile defense destroyers.

The United States has also assigned most of its ballistic missile defense capable ships to the Pacific, extended the BMD program to all Aegis destroyers, and increased procurement of SM-3 BMD missiles.

The US also has a large network optimized for tracking ballistic missile launches which may give carrier groups sufficient time to move away from the target area while the missile is in flight.

Kinetic defenses against the DF-21D would be difficult. The Navy’s primary ballistic missile interceptor, the SM-3, would not be effective since it is designed to intercept missiles in the mid-course phase in space, so it would have to be launched almost immediately to hit before reentry or from an Aegis ship positioned under its flight path. 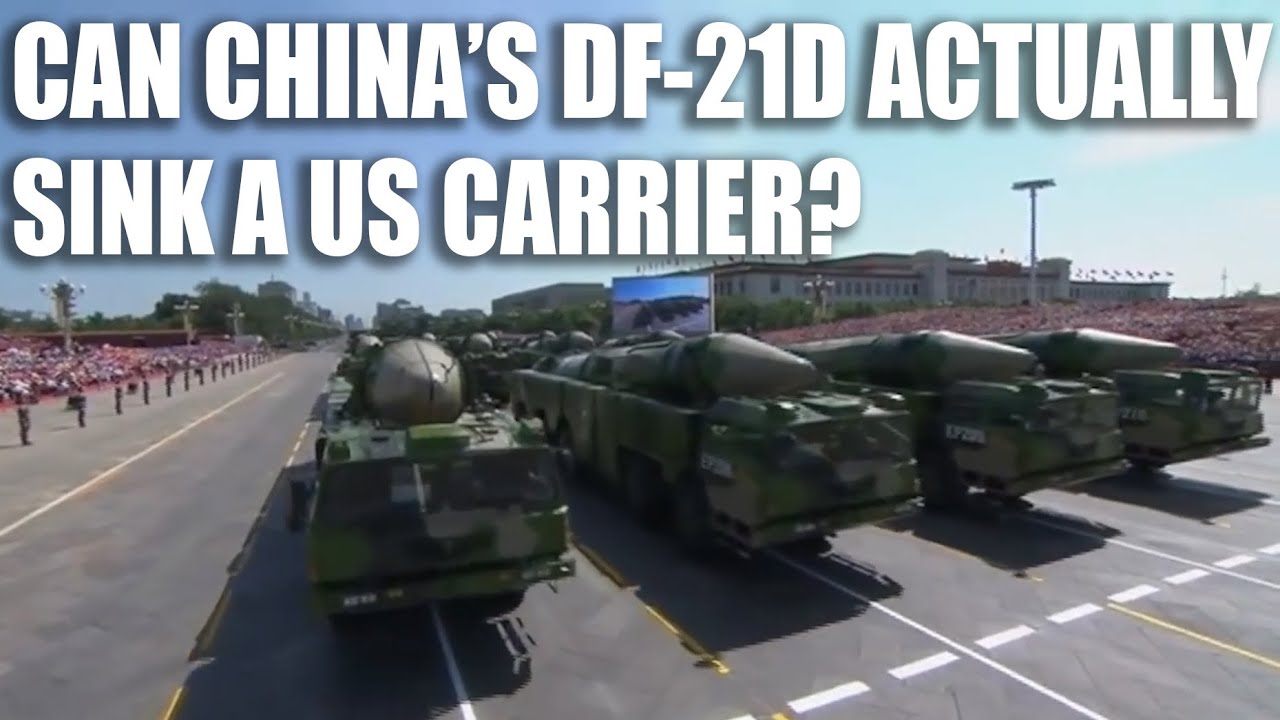 The SM-2 Block 4 can intercept missiles reentering the atmosphere, but the warhead will be performing high-G maneuvers that may complicate interception. The US Navy has also begun deploying the vastly more capable SM-6. The SM-6 is designed to intercept ballistic missiles in the terminal phase.

In late 2013, a Russian Military Analysis report of the DF-21D concluded that the only way to successfully counter it would be through electronic countermeasures.

Conventional interceptions of high-speed objectives have worked in the past, with the Russian report citing the 2008 interception of a malfunctioning satellite by a U.S. cruiser, but in that situation, the warship had extensive knowledge of its location and trajectory.

Against an attack from the Mach 10 DF-21D without knowing the missile’s launch point, the U.S. Navy’s only way to evade it would be through electronic countermeasures.

The use of such a missile has been said by some experts to potentially lead to a nuclear exchange, provoke regional arms races with India and Japan, and end the INF Treaty.

Originally developed as a strategic weapon, the DF-21’s later variants were designed for both nuclear and conventional missions. It is thought able to carry high explosive and submunition warheads, as well as a nuclear warhead of 300 kt.

The latest DF-21D was said to be the world’s first anti-ship ballistic missile (ASBM). It has also been developed into a space-capable anti-satellite weapon/anti-missile weapon carrier. The DF-26 was a further development of the system, with an extended range of about 5,000 kilometers.