Who was the most searched Indian celebrity in Pakistan in 2019? Google has rolled out its annual list of top trends and topics that people searched the most throughout the year. Just like for India, Google released a list of top trends for  Pakistan too and the results are quite interesting.

Former actress Naimal Khawar Khan was the most trending person in Pakistan this year. Naimal tied the knot with Hamza Ali Abbasi in August this year. The actor had become the source of much talk on social media after her decision to quit the media industry.

Waheed Murad came in the second spot for most searched personalities in Pakistan. In 2010, 27 years after his death, the Pakistani government awarded him with ‘Sitara-e-Imtiaz’, the third-highest honour and civilian award by the State of Pakistan, given in the fields of literature, arts, sports, medicine, or science.

It’s a bit surprising that Babar Azam only comes in at number three and not higher. If the year 2019 belonged to any Pakistani athlete it surely, without a doubt, a full 100 per cent, was Babar Azam.

The run machine started the year with some delightful stroke play against South Africa and Dale Steyn, did reasonably well in Pakistan Super League (PSL) 2019 but truly emerged as a superstar during the World Cup in summer when he smashed several records.

He remained the world’s top-ranked T20I batsman — a feat for which he was rewarded with the format’s national captaincy. Which is why number three is still a bit low for Azam. Perhaps, the fact that he is not a complete newbie worked against him.

Asif Ali’s entry at number four is an even bigger surprise than Babar Azam’s at number three — but for completely opposite reasons. Asif had a decent PSL to start 2019 but from that point on he failed completely.

He was inducted in the national setup for his ability to hit big but he neither hit big nor small for the remainder of the year. Perhaps, the promise of Pakistan unearthing a much-needed slogger made cricket fans search for him. They should keep on searching for someone else though.

It’s no surprise that singer Adnan Sami who is often trolled for being an “undercover agent” make it to the list of most searched people.

Sami who previously held a Pakistani passport and received Indian citizenship in 2015, is often seen trending on social media usually when tensions run high between Pakistan and India.

Actor and daughter of actors Amrita Singh and Saif Ali Khan, Sara Ali Khan is frequently in the news for one thing or the other.

Her work in Simmba alongside Ranveer Singh gave a boost to her popularity. Adding to her vibrant social media presence, Khan is definitely one of the up and coming stars of the Bollywood industry.

She can next be seen alongside Kartik Aaryan in an Imtiaz Ali drama and alongside Varun Dhawan in 1995 adaptation of the comedy film Coolie No 1.

Mohammad Amir, too, had a decent PSL 2019 but he infamously went through a lengthy wicketless run with the national team. He nearly missed out on the World Cup but was eventually picked and redeemed himself, almost carrying Pakistan on his back during the first half of the tournament, which is when most of the Google searches for him must have come.

Post-World Cup, his retirement from Test cricket stirred up new controversy, which once again reignited fans’ interest in him.

The only way you would not know who Alizeh Shah is would be if you had been living under a rock, in Pakistan of course.

The 19-year-old rose to fame with her role in drama Ishq Tamasha, for which she received the award for ‘Best New Sensation’. She then went on to star in Superstar along Mahira Khan.

But it is her work in drama Ehd-e-Wafa as Dua, which has put the actor in Pakistan’s most searched people list.

His last name might not be what most people know him by, but if you were anywhere near a television set or on social media at the end of February this year, you would know who Abhinandan is.

The Indian Air Force pilot became an internet sensation in the country after he plane was shot down in an aerial dogfight earlier this year. However, it was courteous demeanour in a video showing him sipping a cup of tea and comment that the tea was “fantastic”, which made him a viral sensation.

News anchor Madiha Naqvi rounds up this year’s top searches after she tied the knot with Muttahida Quami Movement’s (MQM) Faisal Sabzwari of in a low-key wedding ceremony this summer. 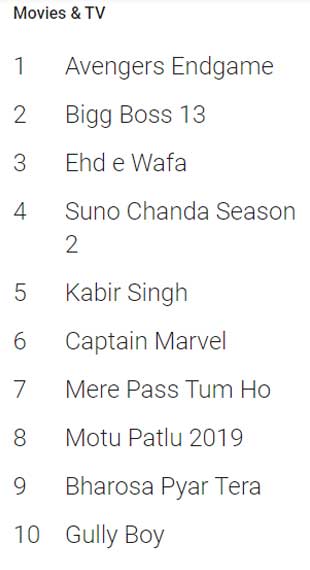