Russian defense manufacturer Kalashnikov Group has unveiled its latest rifle under the AK series – the AK-19. The first version of the gun, the AK-47, was used by the Red Army of the Soviet Union from 1949. 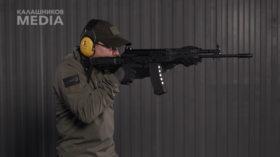 The rifle is based on the AK-12 platform, featuring the same design and ergonomics. The rifle’s distinct feature is being chambered in .223 NATO (5.56x45mm) – a round used by most modern militaries in the world.

The rifle features the same full-length Picatinny rail across the top cover, much like the AK-12, and was shown with reportedly a new rear peep sight, which can be seen in a video released by Kalashnikov Concern on its Facebook and Instagram handle.

According to the post, the rifle’s barrel length is 415mm, compared to 386mm of its obvious-rival M4 carbine. The gun is due to be presented at the Army-2020 International Military-Technical Forum from August 23-29, at the Patriot Park, Moscow.

The twist rate is specified to be 1:7 inches, common for the modern 5.56x45mm chambered rifles. Strikingly, the stock shown in the video is much different from the telescopic stock generally shown on the AK-12 – which the company has claimed to be improved over previous models.

The company also stated that the rifle has improved ergonomics and a new muzzle device which can allow mounting quick-attach suppressors. The magazines too, are similar new polymer-built with windows denoting the number of rounds left.

Kalashnikov Concern has made several iterations of the AK-12 platform, distinctively having the front sight combined with the gas block- which was derived from the development of the AK-100 series.

Primary iterations include the AK-15 (the 7.62x39mm variant), the RPK-16 (LMG variant), and the AK-308, a rifle which was made prospectively for the orders from the Indian Army following its request for .308 NATO rifles, and other buyers along with the civilian market.

The Indian Army recently finalized AK-203 to equip its soldiers replacing the INSAS rifles. Following the Make In India initiative by Modi-government, Kalashnikov has agreed to set up a factory in the city of Amethi, and the deal is expected to be inked during the visit of Russian President Vladimir Putin to India in October.