As winter unfolds on the rough mountainous terrain of Eastern Ladakh, where the militaries of the two neighboring nations – India and China are gearing for a potential war, New Delhi has formed a defensive wall around several sectors of the region to thwart any attack from PLA.

As things stand, India’s first line of offense is led by the newly acquired Rafales, the second batch of which is scheduled to arrive this month, along with the T-90 Bhishma tanks and T-72 tanks, which have for long served at the heart of the country’s defense.

With New Delhi fielding its tanks in large numbers along with BMP-2 infantry combat vehicles in key sectors of Ladakh which include the Depsang plains in the sub-sector north (SSN), there is a high probability that Beijing has devising plans to penetrate the Indian defense by demolishing the tanks, if a war breaks out.

Recently, a report in China’s state media claimed that President Xi Jinping had given a go-ahead for the People’s Liberation Army (PLA) to test drones and new infantry launchers upgraded with anti-tank and anti-bunker capacities near the Line of Actual Control (LAC) border it shares with India.

It is very well a possibility that the Chinese military planners have considered the Indian T-72s to be the weaker link in the tank formation, with the Soviet main battle tanks being destroyed at the hands of MAM-L Unmanned Aerial Vehicles (UAV). 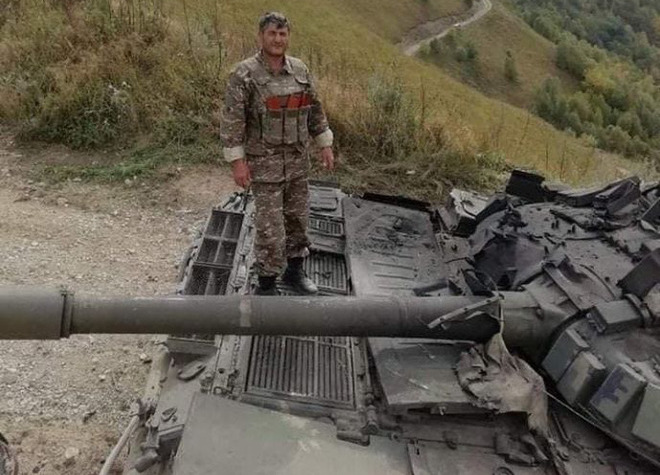 A T-72 captured by the Azerbaijani Army in Nagorno-Karabakh shows that it was under attack from the air. Via: Soha

The MAM-L drones, which have been developed by the major Turkish weapons manufacturer and defense company, Roketsan, boast an impressive history of inflicting severe damage on the T-72s in their overall operational history.

According to the information from a Turkish defense website, the MAM-L drones led to the destruction of over 100 main battle tanks like the T-72s.

The MAM (Mini Akıllı Mühimmat) is a laser-guided smart munition system developed for drones along with the light attack aircraft and air-ground missions, which can engage both stationary as well as moving targets with huge precision.

There are a series of MAM variants including the MAM-L thermobaric variant along with a high-explosive MAM-C variant which has been specifically designed by Roketsan to have high operational effectiveness against modern Russian mainframes such as the T-90 and the T-72B3.

With no deal with Turkey in place for such variants in the public domain, military experts believe that China, who are considered the masters of reverse-engineering Western fighter jets and other military equipment, may already have equipped their drones with anti-tank munitions like that of the MAMs.

China who ranks high for indigenous drone production alongside Israel, Turkey, and the United States has the manpower and other resources to develop such weapons of mass destruction at the orders of President Xi.

According to a report in a Vietnamese news outlet, Soha, the MAM-L has all it takes to take on the tanks which are under India’s possession.

“With options of anti-tank warheads, fragmentation warheads or thermoset warheads, the MAM-L is effective against small structures, motor vehicles, radars and “soft targets” such as arsenals and enemy infantry was at distances from 500 meters to 8 km with an error of less than 1 meter,”

According to the MAM-L parameters published by Roketsan, the missile warhead penetration is more than 700 mm RHA (uniform steel armor). It should be noted that the turrets of the T-72 variants of the 1970s and 1980s such as the T-72 Ural, T-72A, T-72M, and T-72M1 are monolithic cast steel equivalent from 450 to 560 mm RHA. This explains the heavy losses of the T-72 in Syria and Nagorno-Karabakh.”