On January 28, US President Donald Trump, in the presence of Israeli Prime Minister Benjamin Netanyahu, presented his American plan for a peaceful settlement of the Arab-Israeli conflict in the Middle East and creation of a Palestinian state. The Trump Plan is a 180-page document called Peace for Prosperity.

We carefully read this document, and if we ignore the current political context and give it a general assessment, we must admit that the “Trump plan” is basically not new and not original. In 1995, his main idea was formulated in a recent Knesset speech by Israeli Prime Minister Yitzhak Rabin. Rabin proposed leaving Jerusalem united and under the rule of the State of Israel.

Parts of the West Bank with Jewish populations and established Jewish settlements from the entire Jordan Valley are also included in Israel. And the rest of the West Bank, along with the Gaza Strip, will be transferred under the control of the Palestinians, for whom something “smaller than the state” should be created.

Meanwhile, the principle of “two states” – Israeli and Arab in Palestine as the basis for negotiations was finally adopted in 2007 at a conference in Anapolis with the participation of the Palestine Liberation Organization (PLO), Israel and the United States.

On June 4, 2009, US President Barack Obama in his Cairo address to the Islamic world reaffirmed the US commitment to the principle of two states.

Several years passed, and in 2017, President Trump publicly abandoned the principle of “two states” with regard to resolving the Arab-Israeli conflict. The peace process began to crumble. A similar decision by the American president was met with sharp criticism in the international community, at the UN, and finally, among the US allies.

By that time, the creation of a “Palestinian state” as the ultimate goal of a peaceful settlement had become the axiom, alpha and omega of a Middle East peace settlement.

The territorial dispute in Palestine, the refugee problem, have become the trigger for a deeper, civilizational conflict in nature. Ultimately, disputes in Palestine engendered a religious conflict between Israel and the Muslim world regarding control of religious shrines. 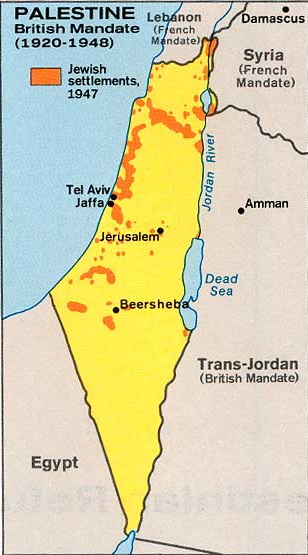 In the end, the authors of the “Trump Plan” were forced to back down on the issue of the principle of “two states.” They proclaimed the “right” of the Palestinians to self-determination and the creation of their own state.

The Trump Plan promises to grant statehood to the Palestinians – not tomorrow, but if the negotiation process and a peace agreement is reached, then at least four years later.

However, the “Palestinian State” is set in the American “Trump plan” with such conditions that the Arabs receive at the end – something “smaller than the state.”

In fact, we are talking about an asymmetric confederation or even Palestinian autonomy within Israel, renamed to the international community as a “Palestinian state.” In the Trump Plan, this is defined as “restricting certain sovereign powers in the Palestinian areas, hereinafter referred to as the Palestinian State.”

The creation of a “Palestinian state” must meet a set of basic conditions where Palestinian leaders must:

– accept peace by recognizing Israel as a Jewish national state (“The State of Israel has a legitimate desire to be a national state of the Jewish people and that this status be recognized throughout the world”); thus, Arabs with Israeli citizenship will receive the status of a national minority in Palestine, in their homeland;

– reject “terrorism” in all its forms (“In order to achieve a comprehensive peace, the Palestinian people must clearly state that they reject the ideology of destruction, terror and conflict”);

– reach agreements that relate to the “vital” needs of Israel and the region;

“The term“ State of Palestine ”refers to a future condition that does not exist at present. It can be recognized by the USA only if the criteria described in this plan are satisfactorily fulfilled. ” “If these steps are taken and the criteria set forth in this vision are met, the United States will support the creation of a Palestinian state.”

About citizenship. The rights, benefits and duties of citizens of the Palestinian state will be determined in accordance with the current legislation of the State of Palestine and the State of Israel.

The Palestinian state must be completely demilitarized. A Palestinian state will be prohibited from entering into military, intelligence or security agreements with any state or organization that the State of Israel views negatively in terms of its security.

The Palestinian state will not be able to develop its military or paramilitary capabilities inside or outside its borders. The demilitarized Palestinian state will be prohibited from possessing capabilities that may threaten the State of Israel, including weapons systems such as combat aircraft (manned and unmanned), heavy armoured vehicles, mines, missiles, self-propelled artillery, laser/beam weapons, air defence, anti-tank weapons, warships.

The Palestinian state will be prohibited from having its military intelligence; the possibilities of cyber and electronic warfare; production capacities and weapons procurement mechanisms; military infrastructure and educational institutions or possess any weapons of mass destruction.

The Palestinian state security forces will have the following competencies: public order, the fight against terrorism, border protection, the protection of government officials and foreign dignitaries, and response to natural disasters.

In order not to draw attention to their security missions, Israeli security services will use airships, unmanned aerial vehicles and electronic equipment for security purposes in the Palestinian State.

Restrictions on foreign trade. The Palestinian state will have the right to establish its own independent trade policy, but … the State of Israel will retain its sovereignty over all territorial waters, which are vital to the security of Israel.

Due to security concerns, building a seaport in Gaza will remain problematic for the foreseeable future. For this reason, the Palestinian state will not develop its own seaport. It will receive special access to certain facilities in the Israeli Mediterranean ports of Haifa and Ashdod.

Subject to the consent of the Kingdom of Jordan, the Palestinian State may use and manage facilities in the Jordanian port of Aqaba. The Israeli fleet will have the right to block the import of prohibited weapons and materials into the Palestinian state, including the Gaza Strip.

Communication between the enclave parts of the Palestinian state from the Gaza Strip and the West Bank will take place through the constructed high-speed highway through the sovereign territory of the State of Israel.

Most importantly, the Palestinian state will not have border contact with the Kingdom of Jordan. Israel maintains security and exercises control over the entire airspace west of the Jordan River, that is, just including the territories of the main enclave core of the Palestinian state in the West Bank.

“The loss of control of the West Bank would pose a significant threat to the State of Israel.” “The Jordan Valley, which is critical to the national security of Israel, will be under Israeli sovereignty.” In the event of an attack on Israel from the east, the Israelis would be able to defend better, at the first stage, gaining a foothold on the elevated west bank of the Jordan River.

The authors of the plan suggest that during the peace negotiations, the State of Israel will stop the construction of new Jewish settlements in the West Bank and stop the expansion of Jewish enclaves in areas outside their current presence.

The blackmail against the Palestinians is clearly visible here. In the event that they do not enter into peace negotiations and do not accept the Trump Plan, Israeli enclaves in the West Bank will expand.

With regard to the “undivided city,” the plan contains a certain ambiguity since it is further argued that the capital of the Palestinian state should be located in the East Jerusalem sector, “located in all areas east and north of the existing fence, including Kafr Aqab, eastern Shuafat and Abu Dis “.

The capital of the Palestinian state, proposed in the plan, maybe called Al-Quds or get another name. Arab residents of Jerusalem living within the fence can choose one of three options: become citizens of the State of Israel; become citizens of a Palestinian state; maintain their status as permanent residents of Israel. The US Embassy in the State of Israel will remain in Jerusalem.

Following the signing of the agreement between Israel and Palestine, the United States Embassy in the Palestinian State will be located in Al-Quds or elsewhere as agreed with the Palestinians.

Thus, in a matter that of symbolic and religious importance for the Arabs, the Americans have completely sided with the Israelis. Yes, the current “East Jerusalem” will become the capital of the Palestinian state, but it should be renamed Al-Quds or otherwise.

The problem of the Gaza Strip is political in nature because of the control over this territory of the Hamas party. According to the proposed plan, “the Palestinian Authority or another body acceptable to Israel will gain full control over Gaza. Hamas, the Islamic Jihad organization and all other armed groups and terrorist organizations in Gaza will be disarmed, and Gaza itself will be completely demilitarized.

” How to do this in practice? It is not clear, but it is obvious that the authors of the plan offer the Palestinians to enter into an internecine struggle.

Obviously, in a future Palestinian state, the Hamas party and other hostile Palestinian organizations should be banned. As a condition for peace negotiations, the Palestinians are required to immediately cease cash payments to the “terrorists” serving their sentences in Israeli prisons, as well as the families of the dead “terrorists”.

The Israeli-Palestinian Peace Agreement will provide for the release of Palestinian prisoners and administrative detainees held in Israeli prisons, with the exception of (a) Persons convicted of murder or attempted murder; b) persons convicted of conspiracy to commit murder; and c) Israeli citizens.

All released prisoners will become citizens of the Palestinian State. Their choice in favour of Israeli citizenship is impossible.

The problem of refugees. The Israeli-Palestinian peace agreement should ultimately provide for the complete cessation and withdrawal of any claims relating to refugee status or the right to immigration. After the peace deal, the concept of “Palestinian refugees” should disappear.

– Reception of refugees by the Palestinian State;

– Integration of refugees by their current host countries, subject to their consent;

– Admission of five thousand refugees every year for up to 10 years (a total of 50 thousand refugees) by individual countries – members of the Islamic Cooperation Organization, subject to their consent. The main thing here is that refugees should not return to the territories controlled by the Israelis in 1967 and earlier.

The “new cultural policy”, albeit indirectly, is proposed by the authors of the plan to be distributed throughout the Arab world. In this regard, the “revisionist initiatives” that cast doubt on the true roots of the Jewish people in the State of Israel must be stopped.

In the diplomatic sphere, the Arab countries, together with the Palestinian state, must stop supporting anti-Israeli initiatives in the UN and other multilateral organizations. They should not support any attempt to delegitimize the State of Israel. Any boycott, deprivation of rights and sanctions against Israel must be stopped.

As a result, from all of the above, it is clear why the Palestinians are not ready to accept such a “limited sovereignty” version of the “Palestinian state.” Perhaps they heard about the successful implementation of similar plans in America itself, where for some 200 years the indigenous population of the United States decreased from 5 million (according to various sources, from 1.3 million to 10 million) to 250 thousand people.

Despite World’s Biggest Navy, Why China Will Struggle To Match Indian, American Submarines In The Indo-Pacific?

Goodbye Netanyahu: Why Israel’s Naftali Bennett Government Will Need To ‘Unlearn’ Five Lessons From The Past