Amid growing Chinese hostility in the Indo-Pacific region, the four Quad members – India, Japan, Australia and the US met in Tokyo. This marks the second time when the foreign ministers of all these countries had an “in person” meeting during the pandemic. The first such meeting was held in New York last year.

For The 1st Time Ever, Israeli Jets Conduct ‘Historic Drills’ In Germany & Eurofighter Typhoon Tweets It

According to media reports, Indian Foreign Minister S Jaishankar without naming China emphasised on the importance of “coordinated response”. “The events of this year have clearly demonstrated how imperative it is for like-minded countries to coordinate responses to the various challenges that the pandemic has brought to the fore,” he said.

Delighted to join my QUAD colleagues at our Ministerial consultations in Tokyo. Thank FM @moteging for his gracious hospitality.https://t.co/hFSZRPu7Rf pic.twitter.com/1gfxiHdHXs

He further added the importance of meeting even during the pandemic – “The fact that we are meeting here today, in person, despite the global pandemic, is a testimony to the importance that these consultations have gained, particularly in recent times.”

Unlike, Jaishankar or infact any of the other foreign ministers, the US Secretary of State Mike Pompeo didn’t shy away from naming China as an aggressor in the “South [China Sea], in the East China Sea, the Mekong, the Himalayas, the Taiwan Straits.” 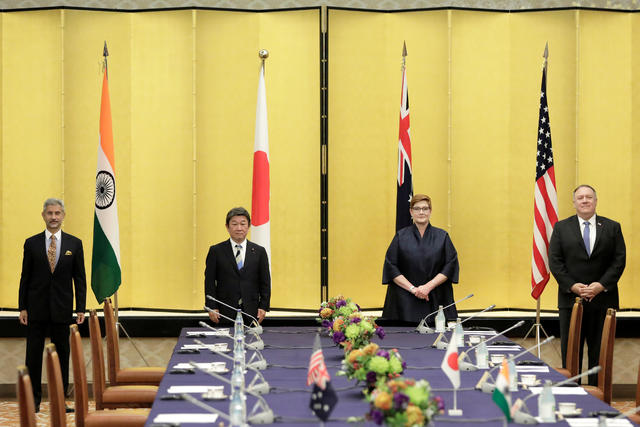 Pompeo says U.S. and “Quad” partners must answer China’s rise, “for the soul of the world”

“As partners in this Quad, it is more critical now than ever that we collaborate to protect our people and partners from the Chinese Communist Party’s (CCP’s) exploitation, corruption, and coercion,” stated Pompeo. He blamed Beijing’s “authoritarian regime” for “cover-up” of the COVID-19 pandemic by “silencing” citizens who raised warnings.

.@SecPompeo: The Chinese Communist Party poses a real threat. We want China to engage on the world stage the way we ask every other nation to. pic.twitter.com/X1iZwXFRf6

Chinese Foreign Ministry issued a statement in response to Pompeo’s allegations said that “instead of targeting third parties or undermining their interests, cooperation should be conducive to mutual understanding and trust between regional countries.”

While all the four members are facing hostilities from China, the officials of Japan, India and Australia refrained from using China’s name.

Shen Yi, a professor at the School of International Relations and Public Affairs of Fudan University, China, argued that such a result could be argued as predictable, as each of the Quad members is calculating their own separate interests.

“After separate bilateral meetings with Pompeo on the sidelines of the Quad gathering, Australian and Japanese Foreign Ministers Marise Payne and Toshimitsu Motegi did not mention China in their speeches.”

Apart from meetings aimed at counter Chinese belligerence in the neighbourhood, the Quad members are looking to reduce economic and trade dependency on China and build a mutually complementary relationship among partner countries.

Supply Chain Resilience Initiative (SCRI) was initiated by Japan to build a trilateral trade network with India and Australia. Other Asian and Pacific nations may be roped in at a later stage. It was proposed to counter to declining economies due to COVID-19 pandemic and the ongoing US-China trade war where both the nations have applied tariff sanctions on each other, impacting trade in other countries.

Analysts believe that the SCRI is proposed to counter the Belt and Road Initiate (BRI) launched by Chinese President Xi Jinping. The SCRI may take years to flourish as the dependency on Chinese goods is still enormous.

According to RK Singh, a corporate economist in Mumbai and a former assistant director of the Finance Commission of India, international supply chain cooperation requires open trade regimes — a point that Australia, India, and Japan agree on — that allow inputs, intermediates, and finished merchandise to cross borders efficiently and seamlessly.

“That’s a huge hurdle for India, with its increasingly protectionist stance, to jump,” he stated. “The barriers to India successfully participating in any alternative supply chain to rival China are so high that even Modi must be able to see them.”