China and Nepal have consented to upgrade their ties to a strategic partnership of cooperation featuring ever-lasting friendship for development and prosperity, propelling the two countries’ relationship to even greater heights. 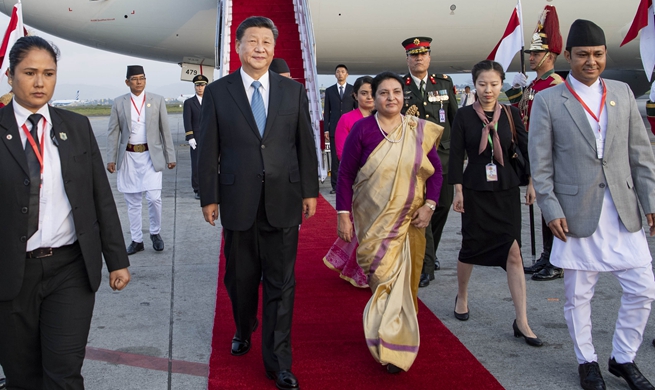 The agreement was signed when Chinese President Xi Jinping met with Nepal’s  President Bidhya Devi Bhandari in Kathmandu on Saturday. Xi arrived in Nepal Saturday for the first state visit by a Chinese president in 23 years

Chinese President Xi Jinping said here on Saturday that the Chinese side stands ready to enhance communication and cooperation with the Nepali legislatures and jointly consolidate the friendship between the two countries. Xi made the remarks when meeting with Chairman of the National Assembly of Nepal Ganesh Prasad Timilsina.

Xi said, he has been deeply impressed by the warmth and hospitality toward China shown by the president, prime minister, ministers, party leaders and the people of Nepal. Chinese President also stated that China-Nepal friendship, standing as high and magnificent as the Himalayas, has taken deep root in Nepal, which has further consolidated the confidence in developing friendly bilateral relations.

Timilsina said his country is lucky to participate in the joint construction of the Belt and Road and is convinced that the great initiative will score an even bigger success.

Why Small Drones Are The Biggest Enemies For The US Military In Conflict Zones?

The biggest threat faced by the US troops currently deployed in the Middle East is the presence of tiny military drones that possess the...
Read more

India was looking for a tactical missile system to thwart any threats from Chinese or Pakistani main battle tanks and infantry vehicles. While there...
Read more