China made a U-turn on bizarre claims on Mount Everest also known in China as Mount Qomolangma. Authorities in China had claimed that Mount Everest was located in China’s Tibet which drew sharp criticism from Nepal and India.

Upon correction, CGTN now states that Mt Qomolangma, the highest peak in the world, is located on the Nepal-China border.

The tweet on Mount Everest was actually made last week on May 2, 2020, and resurfaced after netizens in India and Nepal had been arguing over the inauguration of a new road to the Lipulekh pass along the border with China in Uttarakhand.

China drew the ire of Twitter users in Nepal and India with many users expressing their anger over the tweet and others labelling it as fake news.

After the international outcry over social media, CGTN revised the tweet but did not apologize for its mistake. The revised tweet now reads,’’ an extraordinary sun halo was spotted on May 1 in the skies over Mount Qomolangma, the world’s highest peak located on the China-Nepal border”. 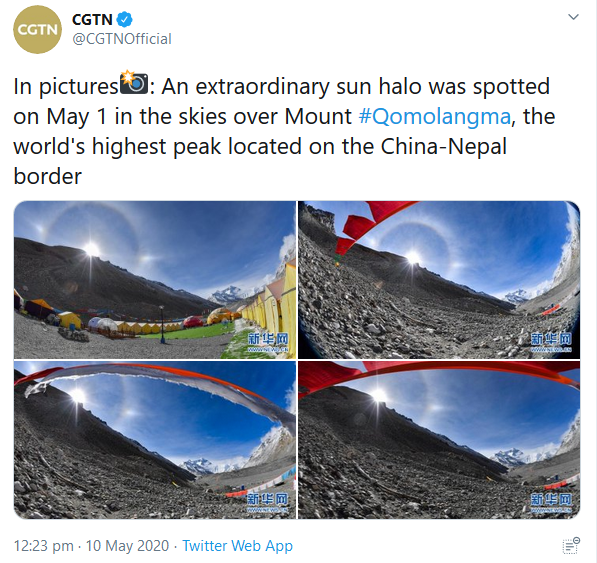 According to a 1960 border dispute agreement between China and Nepal, Mount Everest is divided into northern and southern parts. The former comes under Chinese administration while the latter is under Kathmandu’s.

Srikant Kondopali, a professor of Chinese Studies at Jawaharlal University, spoke about the latest tweet to ANI and said that Chinese actions are not new in the region. According to him, Mount Qomolonga aka Everest on the Tibetan side is extremely treacherous and cannot be accessed by the Chinese or mountain climbers easily.

However, China is trying to develop the mountain on its side of the border by installing 5G towers, 6500m above sea level, in a bid to consolidate its position on Tibet and Everest. China claims that the towers allow access to the internet to climbers and scientists but there is a worry that Beijing might use the technology to snoop in on neighbours India, Nepal and even Bangladesh and Myanmar.

At the beginning of the month, China sent a team of scientists and surveyors to Mount Everest to measure the world’s tallest peak amid an ongoing ban on climbing because of the coronavirus pandemic.

Tibet is a contested region which China claims and controls in its entirety. The Dalai Lama leads the exiled government of Tibet from Dharamshala, India. This puts India at odds with China as the latter accuses the former of providing refuge to people that are a threat to Chinese sovereignty and national security.

India, China Were At The Brink Of Full Blown War After Indian Army Seized The Kailash Heights: Top Commander

Indian Army's top commander recently said that the India-China border stand-off would have turned into a full-blown war when the Indian Army had occupied...
Read more

India’s Defence Space Agency (DSA) is looking for technology to deal with threats in and from space, according to reports. The DSA was formed...
Read more
Load more