This is the first batch out of the total order of eight. Adding that the country is the only one apart from UAE and China to have the drone in service, Air Commodore Ibikunle Daramola, chief of Director of Public Relations and Information Headquarters Nigerian Air Force (DOPRI) mentioned:

“WingLoong II, which can remain airborne for 31hrs in ISR mode & 26hrs in offensive role, will add significant value to COIN & anti-banditry Ops.”

The tweet comes after a month when Nigeria’s Air Force Chief revealed about the deal with Beijing of acquiring 8 unmanned combat air vehicles (UCAVs).

The Air Commodore also tweeted about other aircraft acquired by the service, most notable of which includes the Pakistani JF-17 ‘Thunder’ fighter jets. 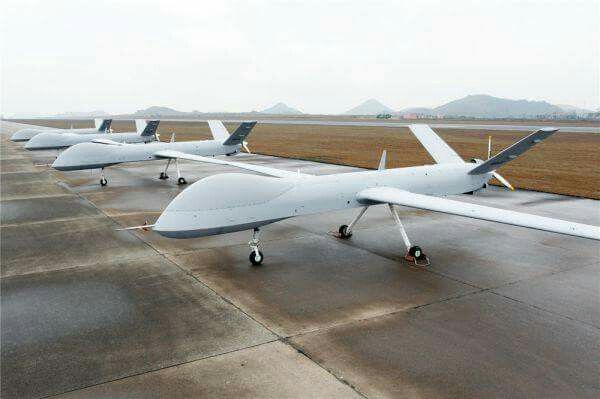 China’s sales of armed drones to Middle Eastern countries have made a significant impact on the market. The United States, which used to refrain from selling MQ-9Reaper armed drones even to its allies like Saudi and UAE, has got a good hit as China expanded its drone sales with fewer restrictions.

The battlefields over the Middle East are now dominated by Chinese drones, which are much cheaper and easier to acquire than their American counterpart.

This has also prompted Washington to approve the sales of MQ-9 RPAS (Remotely Piloted Aerial System) to UAE, along with the much-talked-about F-35.

Intended for use as a surveillance and aerial reconnaissance and precision strike platform, Chengdu unveiled the concept of Wing Loong II at the Aviation Expo China in Beijing in September 2015.

With similar characteristics and physical appearance to the MQ-9, the Wing-Loong II is operated via satellite link, allowing it to have long-range strike capabilities.

It is an enlarged version of its predecessor Wing Loong, having better payload and endurance, with a longer body and wider wingspan.

The aircraft has been used by the UAE to perform airstrikes against the Turkish-backed GNA (Government of National Accord) forces in Libya.

Likewise, Saudi Arabia has also used these drones to target Houthi militias in the Yemeni Civil War. In October 2018, it was announced that Pakistan Aeronautical Complex and Chengdu Aircraft Corporation would jointly produce 48 Wing Loong II UAVs for use in the Pakistan Air Force.