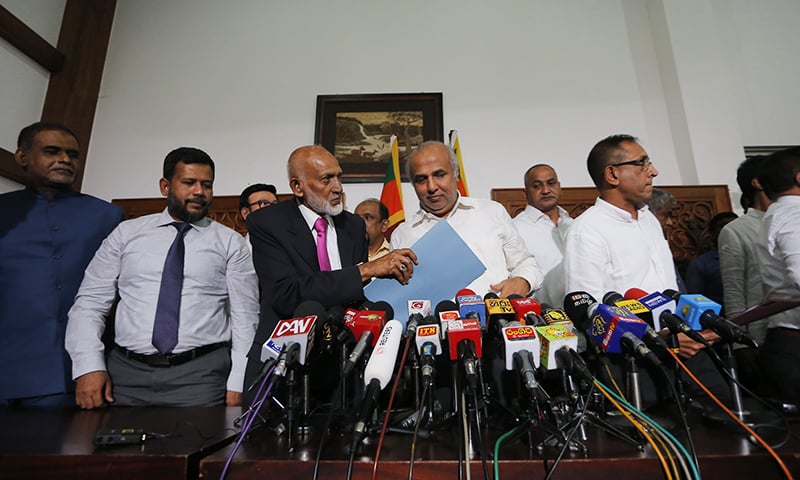 Demonstrations by several thousand people gripped the central pilgrim city of Kandy as monk Athuraliye Ratana insisted governors of two provinces and a cabinet minister be sacked over their alleged involvement with militants responsible for the bombings.

Even as shops and offices were closed in the city 115 kilometres east of Colombo, the two provincial governors stepped down, Sirisena’s office said. Within hours, the nine legislators, belonging to several Muslim and mainstream parties, resigned saying they were giving up their portfolios to ensure free investigations into the Easter attacks.

The nine included Commerce Minister Rishad Bathiudeen, the cabinet minister whose sacking had been demanded by Ratana. Muslim leaders said their community — which consists of 10 per cent of Sri Lanka’s 21 million population — had become victims of violence, hate speech and harassment since Muslim extremists were held responsible for the bombings.

Water Supply Minister Rauff Hakeem said Muslims had cooperated with security forces to arrest suspects, but the community faced collective victimisation. “We want an end to hate speech, an end to the culture of hate and the culture of impunity for those engaging in hate,” Hakeem told reporters shortly after quitting the cabinet.

He said the Muslims were giving up their portfolios in the hope that the authorities will fully investigate the allegations against members of their community within a month. The ministers who quit on Monday will remain loyal to the government of Prime Minister Ranil Wickremesinghe, they said in a joint statement.

As India Opens Up Space, How ISRO Could Help Indian Air Force Become An Aerospace Superpower