Both Amitabh Bachchan and Sony TV are facing public anger due to an episode of its popular show Kaun Banega Crorepati. #Boycott_KBC_SonyTV is trending on Twitter. Those who use this hashtag say that Amitabh Bachchan has insulted Chhatrapati Shivaji in the KBC show.

In fact, in the episode of KBC telecast on Wednesday, the show’s host Amitabh Bachchan asked a contestant, “Which of these rulers was a contemporary of Mughal emperor Aurangzeb?”

“Maharana Pratap, Rana Sanga, Maharaja Ranjit Singh and Shivaji” were given as four options to this question. 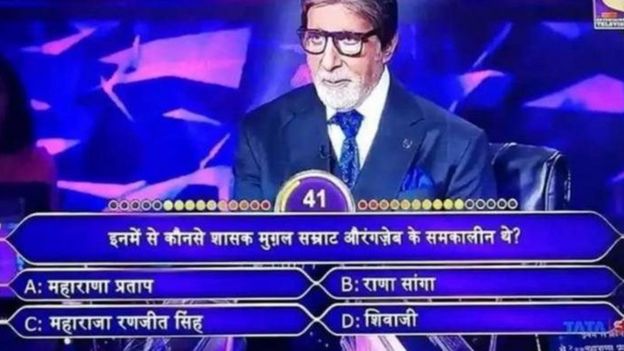 Those criticizing KBC, Amitabh Bachchan and Sony TV stated that the makers of KBC put Mughal emperor in front of Aurangzeb’s name but did not put Chhatrapati in front of Shivaji’s name. This is being seen as an insult to Shivaji.

Abhijeet Jadhav posted a screenshot of the same question of KBC, “It is very sad and shameful. Chhatrapati Shivaji Maharaj did so much and we do not respect his work, what will the future generations learn from it? ‘

Nitin Chavan-Patil wrote, “One of the main goals of Aurangzeb’s policies was to dismantle Hindu temples.” How can the KBC call him Emperor? And why did Chhatrapati Shivaji Maharaj only be called Shivaji? ”

Geetika Swamy, a Twitter user, posted two pictures – “The first picture is of the dome of Aurangzeb’s first wife, located in Aurangabad, it is illuminating with light and it is also very good to maintain. The second picture is of Shivaji Maharaj’s dome in Raigad, there is no electricity and there is no maintenance.

Many people on Twitter are demanding an apology from Sony TV, Amitabh Bachchan and KBC. For this reason, Sony TV has apologized on its behalf.

Sony TV wrote in its tweet, “On Wednesday, due to inadvertence in the episode of KBC, wrong reference was made for Chhatrapati Shivaji Maharaj. We are very angry about this, that is why, understanding the sentiments of our audience, we also ran a scroll apologizing in yesterday’s episode. ”

There was an inaccurate reference to Chhatrapati Shivaji Maharaj during Wednesday’s KBC episode, due to inadvertence. We deeply regret the same and being mindful of the sentiments of our viewers have carried a scroll expressing regret during our episode yesterday. #KBC11 pic.twitter.com/FLtSAt9HuN

However, some people are not satisfied with this apology from Sony TV. They have demanded Amitabh Bachchan must apologize in his show.

Milind Dharmadhikari tweeted, “Dear Sony TV when Chhatrapati Shivaji Maharaj was insulted during the show, then why is an apology being sought on Twitter. If you have so much consideration for the sentiments of Hindus, then this apology should be sought from Amitabh Bachchan during the show itself.

Dear @SonyTV when insult of #ChhatrapatiShivajiMaharaj was made on a show why are you apologizing on Twitter?

If your are really concerned about the sentiments Hindus, apology shall come on Show and that too from the mouth of @SrBachchan ji.@republic @Republic_Bharat

Sony TV has also posted a video with its apology which shown that Sony TV had run an apology scroller on the controversy related to Chhatrapati Shivaji on Thursday.

Although the quality of the video posted with the tweet is poor, many people are also complaining about it. Ranveer has written, “This is such a poor video quality. Amitabh Bachchan should apologize himself ”

What kinda shit video quality is this?
Amitabh Bachchan himself should apologize on the show

Chhatrapati Shivaji laid the foundation of the Maratha Empire in 1674 AD. When he was crowned in Raigad, he was also given the title of Chhatrapati. On the other hand, Aurangzeb ruled for almost 49 years. During his rule, the Mughal empire spread so much that for the first time he made almost the entire subcontinent a part of his empire.