Chinese President Xi Jinping and Indian Prime Minister Narendra Modi are expected to hold the second informal meeting the coastal town of Mamallapuram in Tamil Nadu as Xi Jinping and Modi try to bring the two Asian giants on the same page.

China Does Not Intent To Colonise Pakistan Through CPEC Project – Envoy

Both China and India attach great importance to this second informal meeting of the leaders. China hopes that the two countries could continue the spirit of the Wuhan summit held last April. 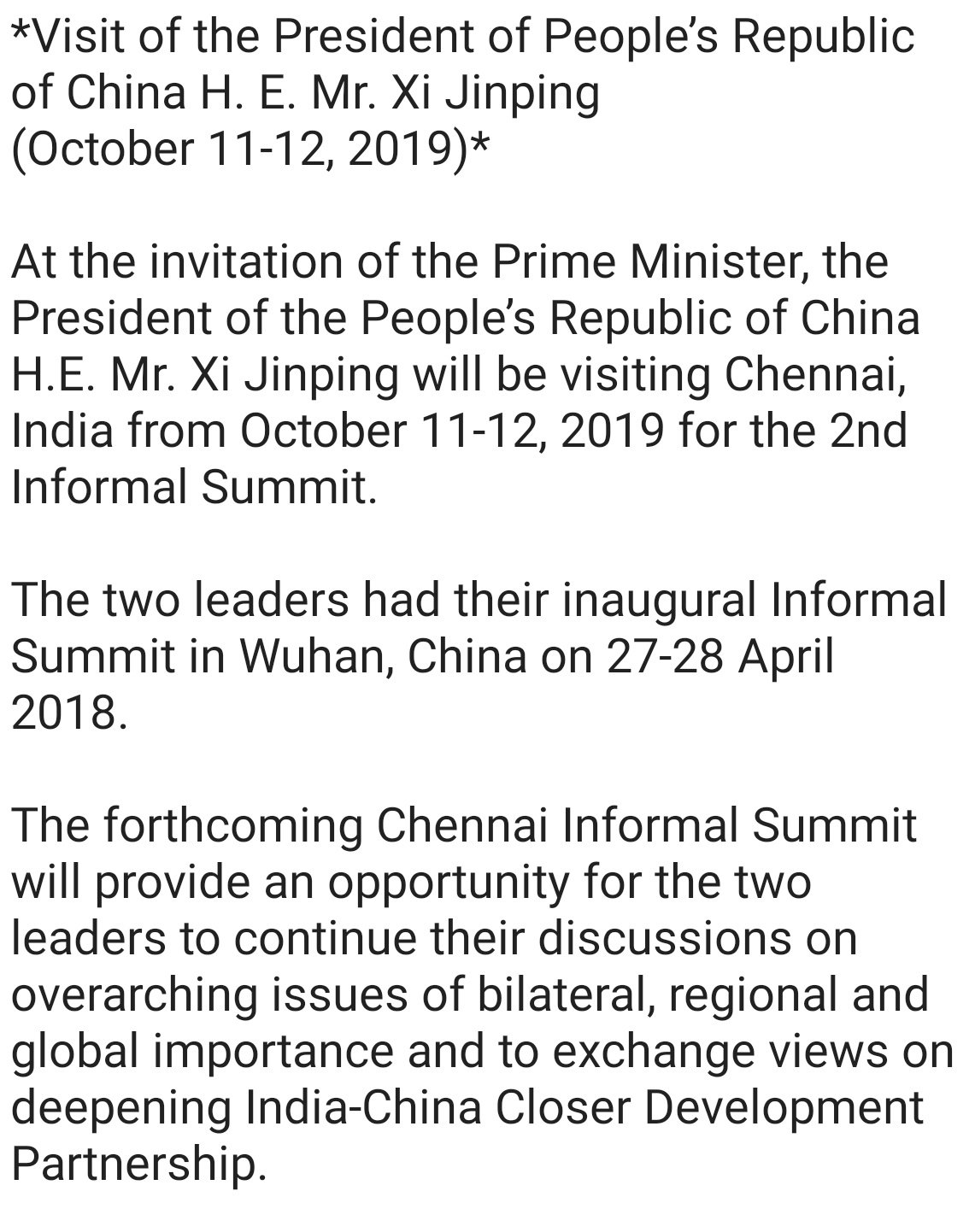 However, the Chinese Global Times stated that Beijing has not postponed or cancelled the meeting despite India violating China’s territorial sovereignty by declaring Jammu and Kashmir into two union territories.

The GT states that this not only demonstrates China’s respect for India’s great power status but also indicates that China is well aware that territorial and border disputes can only be resolved through fair negotiations rather than unilateral actions or military threats.

But it may not be the same for India. The second meeting is set to be India’s most important bilateral event this year. Since Modi was re-elected prime minister, India’s diplomacy with China has become more assertive. New Delhi even has pushed bilateral trade issues to a political level, which on the one hand is closely related to rising nationalist sentiments in India, while on the other, has links to the China-US trade war and China-US geopolitical competition.

India believes that in the wake of enormous pressure from the US, China will definitely seek good relations with its neighbouring countries, including India. Therefore, India may wish to take this opportunity to fulfil some of its diplomatic demands and urge China to support some of its domestic and foreign policies to further enhance India’s international status and boost national morale amid the economic downturn.

Yet the China-US trade war didn’t offer India a golden opportunity for economic development. India is also confronted with tariff pressure from the Trump administration. As immense uncertainties grip the world, China and India should work together to carry forward the spirit of the Wuhan summit and contribute to building peace and prosperity in Asia and the world.

First, facing an increasingly fierce geopolitical competition in the Asia-Pacific region, China and India have the responsibility to work together to maintain regional peace and stability, which is a requisite for both countries to attain further growth. It is critical for China and India to engage in dialogues on maritime order and security, and to construct an open, inclusive, democratic and equal regional security framework, rather than joining with extraterritorial powers in formulating a set of rules to impose on other countries within the region.

Second, in the face of trade protectionism, anti-globalization, and geopolitical competition, which hinder regional economic cooperation, China and India should jointly promote the establishment of an open economic structure and design a new framework for regional cooperation.

The slowdown of India’s economy is closely related to its shallow integration into Asian and global industrial, value and supply chains, and its limited openness to the outside world. Thus India should actively integrate into these chains, and link its projects such as the Sagarmala Program with the China-proposed Belt and Road Initiative, to enhance the level of infrastructure in India’s coastal regions.

Finally, confronted with ethnic and religious conflicts, border disputes, as well as non-traditional security threats like climate change and water crisis, China and India, two ancient civilizations, should set an example by jointly dealing with these issues and resolve territorial disputes through negotiations and consultation. While learning from the cultural achievements of the West, the two sides should enhance mutual understanding through people-to-people and cultural contacts and dialogues among civilizations, and promote exchanges and dialogues on development and governance models.