Pakistan PM Imran Khan has concluded his official visit to China from 25-28 April 2019. Khan attended the attend the Second Belt and Road Forum (BRF) and the Opening Ceremony of the Beijing International Horticulture Exhibition 2019, the Foreign Office said in a press release on Monday. 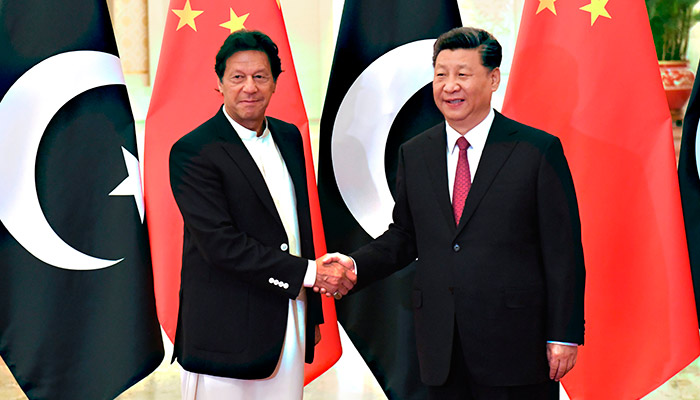 The Prime Minister delivered a keynote speech at the Opening Ceremony of the BRF on 26 April 2019. He attended a banquet hosted by President Xi Jinping for the world leaders the same evening.

Khan also delivered remarks at the first session of the Leaders’ Roundtable on 27 April 2019. The theme of the Roundtable was: “Boosting Connectivity to Explore New Sources of Growth.” In his statements, the Prime Minister inter alia proposed four new areas for Belt and Road cooperation: (i) digital connectivity; (ii) mobility of labour; (iii) cultural connectivity; and (iv) sharing best practices in knowledge and innovation.

The Prime Minister, accompanied by Ministers and Senior Officials delegation, separately met President Xi Jinping and Premier Li Keqiang on 28 April 2019. Earlier, the Prime Minister and his delegation were hosted to a banquet by Vice President Wang Qishan on the evening of 27 April 2019. During these meetings, the two sides reviewed the entire range of bilateral relations including CPEC. They reaffirmed the resolve to further strengthen the All-Weather Strategic Cooperative Partnership in all dimensions.

Both sides discussed important regional and international issues, including peace and reconciliation in Afghanistan and peace and stability in South Asia and agreed to deepen cooperation at the multilateral fora. Following the meeting with Premier Li, a ceremony was held to sign a number of MoUs/Agreements between the two sides, including the conclusion of the 2nd Phase of the China-Pakistan Free Trade Agreement and an agreement on ML-1.

On the sidelines of the BRF, the Prime Minister had meetings/interactions with other world leaders including from Tajikistan, Uzbekistan, Egypt, Malaysia, Ethiopia and the Kyrghyz Republic. He also held meetings with Managing Director of IMF and the CEO of the World Bank as well as corporate and business representatives attending the BRF.

Another important highlight of the visit was the opening ceremony of the Beijing Horticultural Expo 2019, where the Prime Minister interacted with President Xi Jinping and other participating world leaders. The Prime Minister visited the Pakistan Pavilion set up to showcase the country’s plant biodiversity. The Horticulture Exhibition will continue over the next five months.

The Prime Minister attended a luncheon hosted in his honour by the China International Cultural Communication Center and the China-Pakistan Friendship Association. On 28 April 2019, he addressed a China-Pakistan Trade and Investment Forum bringing together a large number of Pakistani and Chinese entrepreneurs. The Forum, which was attended by ice Chairman of National People’s Congress  Zhang Chunxian, provided a platform for the participants to explore the immense business and investment potential of Pakistan. The business-to-business meetings on the sidelines of the Forum resulted in the signing of 14 agreements/contracts.

The Prime Minister was accompanied by a high-powered Ministerial delegation which included the Foreign Minister, Minister for Planning, Development and Reform, Minister for Energy, Minister for Railways, and Advisors on Commerce and Finance as well as Chairman BOI. These Ministers and Advisors represented Pakistan at the Belt and Road Thematic Forums on 25 April 2019. They also interacted with their Chinese counterparts and Ministers from the BRF participating countries.

The Prime Minister’s second visit to China provided an important opportunity to exchange views with the Chinese leadership on bilateral and regional issues; to coordinate on the implementation of Phase-II of CPEC that includes industrial cooperation and socio-economic development; and to invite Chinese businessmen and investors to explore the immense potential of Pakistani market.

The Prime Minister’s visit and his extensive exchange of views with the Chinese leadership, once again, affirmed the vitality of the time-tested, all-weather strategic cooperative partnership, which remains unaffected by any adverse regional and international development, and continues to move from strength to strength.