The last two years have seen the India-US relations tread on rather shaky grounds. There have been very open signs of shifting allegiances and lack of warmth between Indian PM Narendra Modi and US President Donald Trump that was prevalent in 2017. 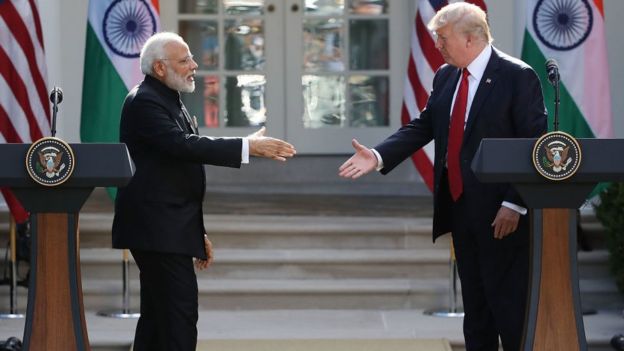 The rather low-key display of affection at the G20 Summit was in stark contrast to the warmth seen during the 2017 visit where PM Modi famously bear-hugged Donald Trump.

It is no secret that there are boiling embers beneath the polished press conferences. There is an evident trend of a “see-sawing moods” when it comes to the Trump-Modi relations. The Trump Administration has sought to pressurise the Indian Government with trade tariffs which has somehow deflated the affection of PM Modi towards Donald Trump.

The more constant irritant in this relationship has been the President of the United States himself, Donald J. Trump. Equipped with a boorish penchant for showmanship, delusional idea of authority and hard-nosed arrogance has constantly sent the bars swinging hard.

The Trump Administration has indicated a very unilateral persona with policies that are in a sense diplomatically unsound in its conception. The idea of putting “America First” has more often than not brought America under bad light in the international arena. Since the inception of the Trump administration, Trump himself has claimed to be a “master negotiator”-an attitude that has irked almost every major American ally including Narendra Modi.

Armed with an almost incendiary sense of narcissism and attention, Trump has somehow managed to make the backdoor channels of delicate diplomacy into a brash reality show lambasted to the cheapest medium available – Twitter. The fact that he has sought to threaten, intimidate and even troll world leaders and international policies on a platform such as Twitter is almost unfathomable. Just a day before the scheduled meeting with PM Modi on the sidelines of the G20 Summit in Osaka, Trump tweeted:

“I look forward to speaking with Prime Minister Modi about the fact that India, for years having put very high Tariffs against the United States, just recently increased the Tariffs even further. This is unacceptable and the Tariffs must be withdrawn!”

The almost blatant intrusion into sovereign and strategic interests of the Indian subcontinent has not gone down well with the Indian government. A conversation that is usually held within the confines of a room to desist escalation, Trump has more often than not made into public showmanship.

There is an almost bipolar sense of naivety within the current US administration with its President at the apex constantly swaying in his stand on matters of the State. Trump was quick in changing the tone and almost cajoled into changing the stance by tweeting how the two premiers of their respective nations were “good friends” and that the “two countries have never been closer.”

The United States has been exercising its bullying tactics on India as much as it has around the world. But it is rather evident that the Modi administration has been headstrong in their responses to the various measures taken by the US to undermine the decisions taken by the Indian government.

The S-400 missile deal from Russia has been an eyesore for the Trump administration. Russia has been a long-time ally and a major supplier of arms to India and the two nations have maintained that relationship through decades. The US is irked by the influence of the Russian defence industry on New Delhi and is vying to gobble the lucrative Indian defence contracts.

Despite the US pressure to cancel the S-400 deal with Russia, the Modi governments steadfast resolve to do anything in its power to uphold the Indian national interest has irritated Donal Trump.

The Trump administration got into a small trade war with India when it imposed heavy taxes on Indian steel and aluminium. India retaliated by raising tariffs on more than 30 American products. The US government has also called to ban Chinese 5G technology and India’s data localisation policy, but both the offers have been disregarded so far. The Modi government, on the other hand, has up until now refused to consider or give a concrete statement for or against it. By the looks of it, the Indian government seems to be going forward with business as usual.

Another matter that has gotten under the skin of the Modi government and has illicit a stern response was the US Department report on International Religious Freedom which suggested that violent minority abuse was rampant in India in 2018 at the hands of “violent Hindu extremist groups.”

This has not translated well with the Indian government which has called out the US for tainting and rebuking the Indian public image. The Minister of External Affairs, S Jaishankar commented that India was a proud secular nation and had made a “long-standing commitment to tolerance and inclusion.” He also added that no foreign entity has the authority to make blank and sweeping statements on “the state of citizen’s constitutionally protected rights.”

With re-election closing in, Donald Trump is more than likely to double-down on “America First” tactics to save face before the American public. But this would do no good as is evident from the ruction from many American allies and foes. If the shifting body languages are any indication, it is clear that India has seemingly begun to drift from this toxic relationship.