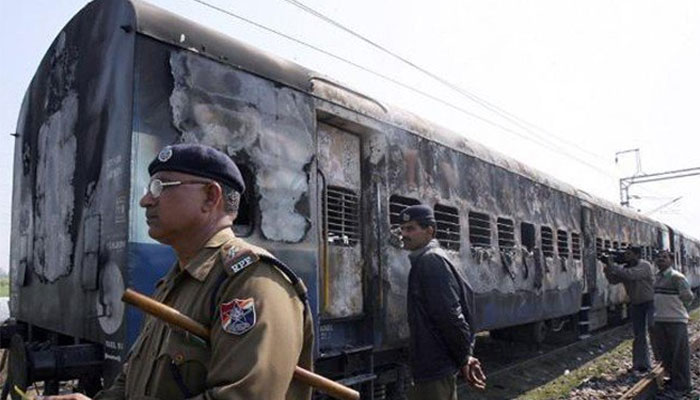 Prime suspect Swami Aseemanand among three others was acquitted in the terror attack on the train, which was going to Lahore from New Delhi. According to the Indian Express report, NIA Counsel RK Handa said that the court concluded that the investigating agency failed to prove the conspiracy charge and the accused ‘deserved a benefit of the doubt’.

Pakistan condemns acquittal of accused Pakistan has condemned the acquittal of the four accused in the terror bombing incident. Foreign Office Spokesman Dr Mohammad Faisal said that more than 42 Pakistani nationals were martyred in the terrorist attack.

“When will the families of those martyred will get justice?” he said.

The Indian court had reserved its order on the case and adjourned the hearing following the plea of a Pakistani woman to have her statement recorded. Rahila Vakeel, a resident of Hafizabad and the daughter of Muhammad Vakeel who had gone missing during the incident, in her petition claimed that she had evidence relevant to the case, the Times of India (TOI) reported. However, Rahila said that she has not yet received a visa nor a call or a summon.

The final arguments in the case were concluded on March 6 and the judgement was reserved for March 11.

In February 2007, alleged Hindu extremists had bombed the Samjhota Express killing 68 people, 42 of whom were Pakistanis. The train was near Panipat and was heading towards Lahore from New Delhi when it was attacked.

The NIA in its charge sheet had named eight people as accused. Sunil Joshi, the alleged mastermind of the attack, was killed in December 2007.