A message titled ‘Why Aamir Khan is more Dangerous than Zakir Naik?’ along with a morphed photograph of the Bollywood actor with the controversial preacher Zakir Naik is doing rounds on the social media. The message first appeared on a personal blog and is now being shared widely.

The message makes certain claims with regards to Aamir Khan being a “very intelligent operator.” It starts by saying that Khan first won the likes of the audiences by making “super-patriotic movies like Sarfarosh, Lagaan and Mangal Pandey and gained the acceptance and trust of patriotic Indians.”

However, the blog claims that he later “started inserting his agenda into his movies.” The author talks about the 2006 film ‘Rang De Basanti’ where Aamir Khan was seen in the lead role.

The author claims that “everyone who saw it [movie] hated George Fernandes and the BJP govt for making a quick buck from corruption in defense deals.”

Fact: Rang De Basanti was premised on the story of an Indian Air Force Pilot who dies in a crash. The movie portrays the Defence Minister shifting the blame on the pilot for the crash and dismissing the corruption claims while buying low-quality defense equipment.

It is said that the story is loosely based on the 2001 incident when Flt Lt Abhijit Gadgil was killed in a MiG-21 crash.

In 2003, his mother, Kavita Gadgil, famously broke the security cordon in Mumbai to handover a file to the then Defence Minister George Fernandes raising questions over the startling rate of fatal accidents with the MiG aircraft.

The file handed over by Kavita also consisted of a letter from Air Force blaming Flt Lt Abhijit Gadgil’s “spatial disorientation”. However, in 2005, Air Force chief Air Chief Marshal SP Tyagi wrote to the Gadgils stating that while a court of inquiry had established spatial disorientation as the probable cause of the crash, it was triggered by a technical malfunction and that Flt Lt Abhijit Gadgil could not be blamed for it.

The next claim in the message is the “anti-Hindu agenda” that ran through a series of the show ‘Satyameva Jayate’. The show focus on the social evils of society. According to the author, the show collected donations for NGOs “working for Muslims or on anti-India agenda.”

Fact: It is unclear what the anti-India agenda is being referred to in the message. Initially, the show was mired with a controversy when a group on social networking website Facebook posted a message alleging that donations collected at the end of the show were being used to construct religious buildings for a particular community, although people from all communities gave donations.

Aamir Khan launched a complaint and clarified rejecting the allegations and saying that the show was associated with Humanity Trust, Hanspukur which had nothing to do with the Trust referred in the Facebook message.

Meanwhile, media reports stated that the show helped a Haryana based NGO Himmat Mahila Samooh (HMS) working on women issues. The NGO was featured in an episode of the show as well. It received Rs. 28 Lakhs in donation from the show.

The author also talks about his opinion on Khan’s movie PK which he claims as “Hinduphobic movie ever made” because the movie made “jokes on our own Gods.”

Fact: PK movie questioned the ‘blind faith in godmen’ that defraud the innocent people in the name of god. Rajkumar Hirani, the director of the movie explained saying that he was not against religious gurus, but only against “fake gurus.”

Notably, PK wasn’t the first movie to portray this. A 2012 movie OMG-Oh my God! starring Akshay Kumar and Paresh Rawal was based on a similar concept where Rawal’s character exposes the corrupt ‘godmen’.

The author takes on the “majority Hindu population who continued to be insensitive and even stupid not to see Aamir’s agenda against Hinduism” because his movies continued to make money. He also criticized Aamir Khan’s latest meeting with Turkey’s First Lady Emine Erdogan. 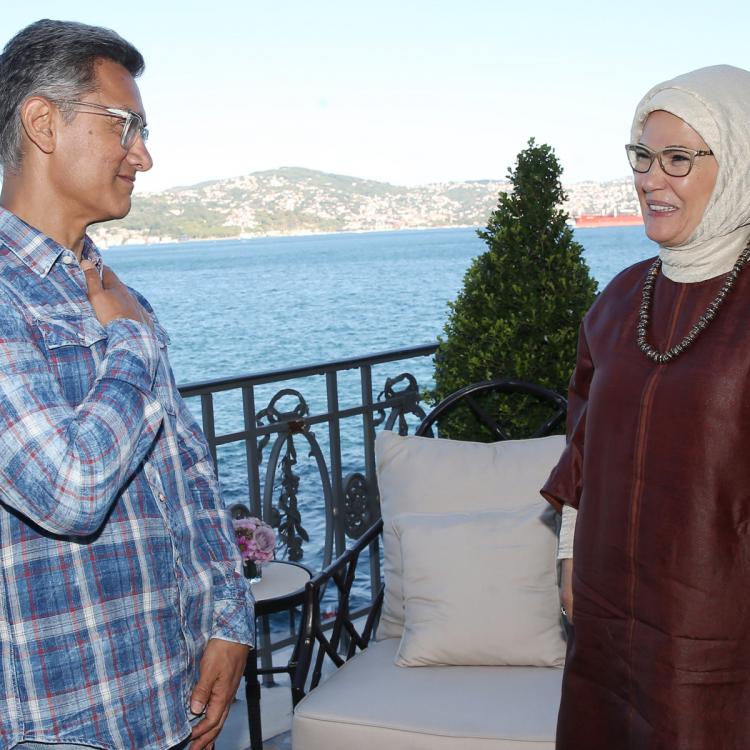 Emine Erdogan had recently tweeted her pictures with Khan who was shooting in Turkey for his upcoming movie and had wrapped up the shoot early. Netizens have responded furiously on the social networking site criticizing the meeting.

However, India still has diplomatic, trade, and even defense ties with Turkey.

In the end, the author issues a warning that Khan shouldn’t be taken at his face value. “He is a bigger danger than all other Muslim stars of Bollywood.”

It is important to note that the message doesn’t once mention Zakir Naik except in the headline. It is thus unfair to compare Bollywood actor Aamir Khan with Naik who fled India in the wake of Dhaka blast of July 2016 and is accused of spreading hatred, funding terror, and money laundering.

With Inputs From Xavier V Francis and Syed Shafiq