Suzanne Bernert plays the role of Sonia Gandhi in the Anupam Kher-starrer ‘The Accidental Prime Minister’. Both Suzanne Bernert and the movie has been creating a lot of buzz ever since the trailer of political drama was released and Indian ruling party BJP endorsed it.

The movie stars Akshaye Khanna in the role of Sanjay Baru and Aahana Kumra as Priyanka Gandhi. What has been creating a buzz apart from the movie’s trailer itself, is the actor who plays the role of Sonia Gandhi in the film. Suzanne Bernert grabbed the attention of the audience. 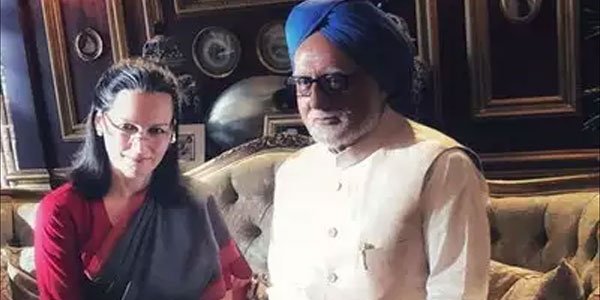 Suzanne Bernert stunning performance in the movie as Sonia Gandhi left many impressed. Bernert has also been a part of films like ‘Honeymoon Travels Pvt. Ltd’ and has acted in many TV soaps like ‘Kasautii Zindagii Kay’, etc. She’s also acted in the epic, Chakravartin Ashoka Samrat as the first foreign antagonist in the show. Interestingly, Suzanne has also featured on the popular TV show ‘Yeh Rishta Kya Kehlata Hai’.

Anupam Kher struck a vociferous note amid the controversy around his movie, The Accidental Prime Minister. “I am not going to back off. This is my life’s best performance,” the actor tweeted.

The movie’s promo, released on Thursday, sparked a war of words between the Congress and BJP with the Opposition party calling it ‘fake propaganda’ and the ruling party describing it as a “riveting tale of how a family held the country to ransom for 10 long years.” The BJP also tweeted the trailer from its official handle.

The actor, responding to howls of protest from the Congress that have described the storyline propaganda, said even Singh will agree after seeing the film that it was a 100% accurate depiction.

Former prime minister Manmohan Singh has so far declined to comment on the movie’s trailer that was released on Thursday. Singh’s party hasn’t demanded a ban on the screening, but that hasn’t stopped the party’s state leaders from alluding to curbs, one way or the other.

In a widely-publicised communication, some Maharashtra leaders have demanded that the film producers organiser a special screening for the state Congress leaders before its release. Else, it handed out a threat to resort to ‘other options’ to stop its screening. Another Congress leader in Madhya Pradesh hinted that the state may not permit but has been contradicted by the party leadership in Delhi.

The 63-year-old actor told news agency ANI that the film is based on facts as chronicled in a book by Sanjaya Baru, Manmohan Singh’s media advisor between 2004 and 2008. “If we make a film on the issue of Jallianwala Bagh or The Holocaust or any historic incident, we can’t change the history or the facts. That’s what we have done here,” he said.

“The book is written by a man who was very close to the prime minister at that time. This book was either ignored or people moved on after its release. So why this hue and cry now?” he questioned.