Russia is planning to modify its Su-30SM fighter jet to carry the Kh-32 air-to-surface missile. The Kh-32 will have a range of up to 1000km and would be able to strike targets without getting in range of defending jets.

The SU-30, developed by Sukhoi is considered to be one of the most successful Russian defence export programmes in the past two decades. The Su-30 is the backbone of the Indian Air Force, which operates around 272 Su-30MKI jets, a unique version specifically designed for India.

The Su-30 is in service with about 12 nations including China, Vietnam, Malaysia, Algeria and Venezuela. The Russian Air Force also purchased a version of the Su-30 fighter, called the Su-30SM. The Su-30SM first flew in 2012 and the Russian military has ordered around 116 jets.

US analysts have claimed the Kh-32 missile, which uses radar guidance, would allow Russian aircraft to target US Navy aircraft carriers without getting in range of defending fighters. The US Navy F/A-18 Super Hornets have a maximum combat radius of around 720 Kilometers only. 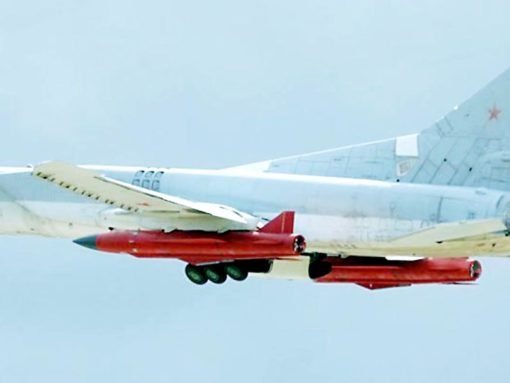 The Kh-32 can carry either a nuclear or conventional warhead. In its 2018 Nuclear Posture Review document, the US Department of Defence categorised the Kh-32 as a nuclear weapons delivery system.

Konstantin Sivkov, a member of the Russian Academy of Rocket and Artillery Sciences, believes that that Kh-32 also possesses powerful means of breaking through the missile defence system of Aegis Combat System”, equipped with Standard Missile 6 missiles.

The Kh-32 missile is estimated to have a speed of over 3 times the speed of sound, while some Russian media outlets have even claimed it is hypersonic (at least five times speed of sound). The Kh-32 is a heavy weapon, with an estimated weight of nearly six tonnes.

The Kh-32, reportedly, became operational in 2016 and is primarily carried by the Tu-22M3 bomber. Izvestia reported the Kh-32 can be carried on the ‘centreline’ hardpoint under the fuselage of the Su-30SM. Typically, aircraft can carry their heaviest weapons or fuel tanks under the fuselage.

Russia has already mounted hypersonic air-to-surface weapons on a smaller warplane. In 2018, it unveiled the Kinzhal missile, which is believed to have a range of around 2,000km.

The Kinzhal is mounted on the MiG-31 heavy fighter, with the aircraft carrying one missile on its centreline. However, the MiG-31 is an ageing platform, which has been in service since the 1980s.

Adding the Kh-32 to the Su-30SM would bring a considerable boost to the Russian military’s offensive capabilities. Interestingly, it not just Russia which is modifying its Su-30 fighter jet. India is also is modifying the Su-30MKI to carry the air-launched version of the BrahMos cruise missile. Last month, India ordered an additional 12 Su-30s to bolster its defence amidst rising tensions with China.