Despite the disengagement efforts between India and China, the People’s Liberation Army (PLA) has built two air defence positions near the 2017 Doklam stand-off region and Naku La in Sikkim.

Investigations with @SimTack of the #Doklam region in the #China, #Bhutan, #India tri junction area present new evidence of PLA air defense infrastructure being constructed roughly 50 Kms from known clash points of the #IndiaChinaStandoff of 2017 & 2020 pic.twitter.com/5JWFZaoXrX

Information about the Chinese activity was shown by a prominent twitter user @detresfa, who regularly posts satellite imagery. He recently posted images as part of a joint study ‘Sim Tack’ of the geopolitical intelligence platform Stratfor saying that the PLA air defence infrastructure is being constructed roughly 50 Kms from known clash points of the 2017 Doklam and 2020 clash points. 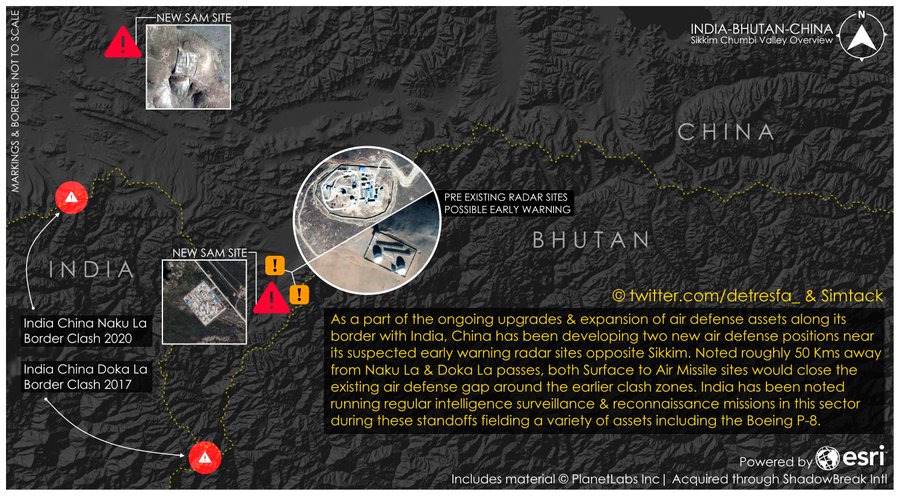 During the 2017 Doklam standoff, the Chinese troops stealthily moved into the Doklam plateau and started building a road in the region. This was seen as an effort to alter the status quo maintained for years in the disputed plateau.

To counter China, India moved its troops in the region to stop the Chinese from constructing the road. It went on for about 75 days and was the longest military standoff between India and China until now.

There were reports stating that China has been pressurising Bhutan to strike a deal on the Doklam boundary dispute. Under the deal, Beijing wanted the Chinese holding line in the contentious region to become the working boundary between the two.

Indian Army chief General Bipin Rawat had earlier warned of China’s “salami-slicing” tactics. The term salami-slicing is described as a strategy that involves divide and capture through the process of threats and alliances to overcome opposition and acquire new territories.

“As far as the northern adversary is concerned, the flexing of muscle has started. The salami slicing, taking over territory in a very gradual manner, testing our limits of threshold is something we have to be wary about and remain prepared for situations emerging which could gradually emerge into conflict,” General Bipin Rawat had said at an event organised by the Centre for Land Warfare Studies in New Delhi in 2017.

Earlier China had used this tactic to conquer Tibet, Aksai Chin and annexed Paracel Islands. China seems to be using the same tactic now in Ladakh again. Experts said the location of missile air defence facilities close to radar installations would help the Chinese side to pick out possible targets with greater accuracy.

The two surface-to-air missile sites would “close the existing air defence gap around the earlier clash zones” for the Chinese, @detresfa said. The Indian side has been “noted running regular intelligence and reconnaissance missions in this sector” during the current standoff with various platforms such as the Boeing P-8 Poseidon surveillance aircraft, @detresfa added. However, there is no immediate reaction from the Indian officials to the development of missile sites.

The new sites aren’t very far from Kalapani-Lipulekh region which is now disputed between India and Nepal. As reported earlier by EurAsian Times, satellite images have revealed that the Chinese military is reportedly constructing a surface-to-air missile site as well as other infrastructure on the banks of the Mansarovar Lake in the India-Nepal-China tri-junction area near the Lipulekh pass.

Previous article
India Bulking-Up Military Hardware In Ladakh As A Tactic To Negotiate With China – Analyst
Next article
Israel Refuses To Sell AWACS To China But Pushes For A Billion-Dollar Deal With India?