Resolve Kashmir Crisis Before Two Nuclear Armed Nations Hit Out At Each Other: Imran Khan

Pakistan PM Imran Khan on Tuesday ruled out talks with arch-rival India, saying it’s no use holding a dialogue with New Delhi until it decides to lift curfew Jammu and Kashmir. 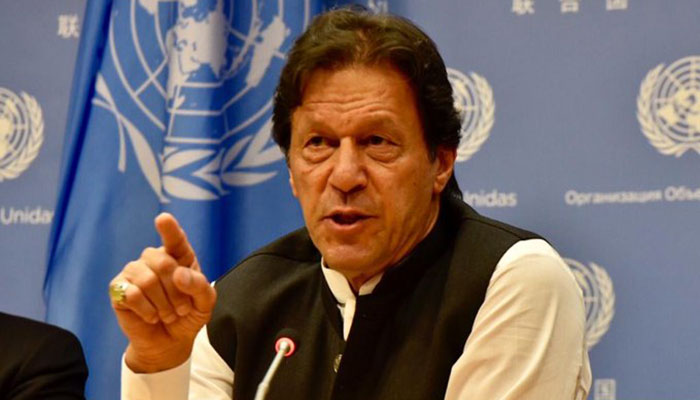 Addressing a news conference along with Foreign Minister Shah Mehmood Qureshi and Pakistan’s Permanent Representative to United Nations Maleeha Lodhi in New York, Khan warned the situation could get worse if urgent efforts were not made to resolve the crisis.

“We have no knowledge what will happen after curfew is lifted. But, we fear genocide to follow,” PM Imran said. “There are over eight million people living in the intense lockdown in the held region. What else could be state terrorism?”

Expressing his disappointment over the world community’s silence over the grave human rights violations in the J&K, Khan said there are eleven Security Council resolutions that recognise Kashmir as a disputed region and it is not an internal matter of India.

Khan also warned that if two nuclear-capable countries fought over Kashmir the entire region will be adversely impacted.

Brushing aside the possibility of any talks between Pakistan and India unless New Delhi lifted the curfew in the valley, Khan said Prime Minister Narendra Modi has now boxed himself into a blind alley by his August 5 decision. Putting eight million people in an open jail is unprecedented in this day and age, he said.

Not Pakistan, But Iran Is The No.1 Terror State In The World: Donald Trump

“Through cricket friendships, I know India of Nehru and Gandhi. And, I know what is going on now,” he said, adding, “I’m alarmed at the current situation. I believe the world leaders need to know about the situation in Jammu and Kashmir. I spoke to them, including US President Donald Trump, British PM Boris Johnson and German Chancellor Angela Merkel.”

PM Imran further said, “This is the time for the world to act before it goes too far,” adding, after the Cuban missile crisis, two nuclear-armed nations have come face to face. Unilaterally the Bharatiya Janata Party (BJP) government has annexed  Kashmir, against their own constitution, he said, adding this is a war crime.

“We fear a massacre in the disputed territory with 900,000 soldiers after the curfew is lifted,” he noted.

Furthermore, Khan thanked Turkish President Tayyip Erdogan for mentioning Kashmir in his speech. “We are thankful that he has taken such a stance on the issue of the people of Kashmir,” the prime minister said.

He added, “We feel more world leaders will follow him talking about it and at the very least asking India to lift the siege.  “Pakistan has a great relationship with Turkey,” he said, adding President Erdogan is coming to Pakistan next month and we are hoping to forward our relations in trade.