This UCAV, a brainchild of the Sukhoi Design Bureau and Russian Aircraft Corporation MiG, has a potent stealth profile. The Hunter-B is being developed for the Russian Air Force and will be delivered to the service by 2024.

Their deployment is planned alongside the Sukhoi-Su-57 fifth-generation stealth fighter.

This Russian military first revealed the stealth attack drone in 2019, after its initial flight. Since then, quite a few images have been released. After President Vladimir Putin completed a meeting with the CEO of the United Aircraft Corporation (UAC) on August 3, 2020, deliveries to the Russian Defense Ministry were updated to a new schedule of 2024.

Only one of the new drones has been completed, but at least three other ones might be in development.

The UCAV is set to enter its prototype stage soon. Russia’s Ministry of Defense television station, TV Zvezda, has recently a video in which, the “Hunter” drone was described as a “laboratory” by Russian officials.

This is the typical term for military assets that are serving as a prototype. The video shows the control interface for flight operators and the internal payload bays along with other features of the forthcoming drone.

While TV Zvezda’s reporter said that Okhotnik is more compact compared to Sukhoi’s Su-57 Felon advanced combat jet, a clip of him walking from the wing of one of those aircraft onto the drone shows that the size difference is not great.

The Hunter combat drone, with its maximum take-off weight of 20t, and with length and wingspan 14m and 20m, respectively, is substantially bigger than its Western counterparts such as Dassault nEUROn and Northrop Grumman X-47B. 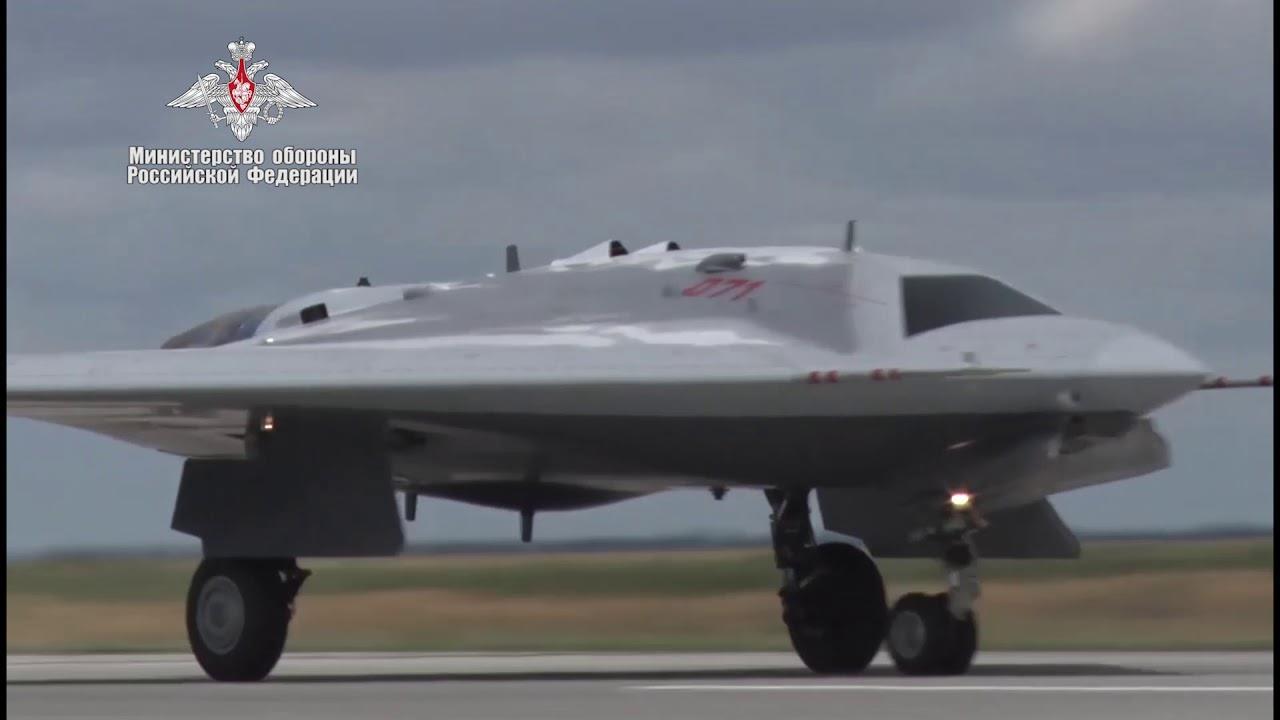 The video also offered a close-up view of the exterior of this Russian drone. Its upper body is covered in various intakes and exhausts, as well as antennas. There is a forward-facing camera system under the central part of the forward fuselage.

TV Zvezda’s report provided an elaborate view of the UCAV’s exposed engine exhaust. Experts believe this is likely to limit the all-around stealthiness of the drone. Sukhoi’s representative pointed out that the S-70 is expected to change significantly. The exposed rear engine exhaust, for instance, will be replaced with a shrouded one.

The representative also stressed the fact that the UCAV was not expected to be overly fast or maneuverable. It would instead rely more on its stealthy characteristics to successfully accomplish its missions.

Several computer models related to the S-70 and its aerodynamics, including the one that appears to show a deep S-shaped engine intake on the drone, were also displayed.

Ducting of this kind helps hide the engine’s fan face. Unless concealed, the fan face would produce a very large radar signature.

Sukhoi’s representative showed the TV reporter a rig used to test the unmanned aircraft’s flight software. This system includes a full physical control system from an S-70 that is linked to a simulator made up of commercially sourced components.

#Russia's Ministry of Defense have released a video of an Su-57 flying with the #UAV #Okhotnik ("Hunter") pic.twitter.com/jQGyoT7Xyu

The report revealed that it currently takes a three-person team to fly the Okhotnik, consisting of a pilot/operator, navigator, and a communications specialist.

As EurAsian Times had previously reported, the production model of the Hunter will likely serve semi-autonomously, as a “loyal wingman”, networked to fly in some type of formation along with the manned Felon aircraft.

‘Felon’ is NATO’s codename for the Su-57. This aircraft has faced criticism for lacking stealth, especially when compared to its American counterpart, the F-35. Although some experts are of the view that the Felon is more maneuverable than the F-35; the former’s higher radar cross-section (RCS), especially laterally and from the aircraft’s tail end, compromises its overall stealth profile.

Experts also believe that the Felon is not a true fifth-generation fighter, instead, it is only ‘stealth capable.’

This insinuates that the aircraft’s stealth profile was designed as a secondary feature, focusing rather on its ability to perform limited stealth roles such as shallow penetration behind enemy lines.

With the Hunter-B as its wingman, though, this dynamic may soon change. The drone has an impressive operational range, is capable of flying armed with over two tons of potent ground-attack and air-to-air weapons, and can make deep precision strikes behind enemy lines.