Amid unconfirmed reports of a Russian MiG-29 fighter jet being shot down in Libya, there is a genuine concern whether India made the right call in pursuing a deal with Moscow to add new 21 MiG-29 fighters to their air fleet to counter Chinese belligerence along the Line of Actual Control.

A video recently surfaced on social media reportedly showing a Russian-speaking pilot after his aircraft crashed or was shot-down in Libya. The clip shows a white-and-orange parachute on the ground, along with other equipment, including a helmet often worn by Russian pilots, suggesting that they managed to bail out from the aircraft.

In the undated video, the pilot filming speaks Russian as he pans across the scene which shows the parachute, helmet, a radio beacon with antenna, and other items. He mentions that he ejected from his aircraft.

Earlier this year, India’s Defence Ministry had approved the purchase of 33 new fighter jets including 12 Su-30MKIs and 21 MiG-29s along with the up-gradation of 59 MiG-29s in a deal worth $3,360 million. The decision was taken in the wake of escalating tensions between India and China along the Line of Actual Control (LAC) in Eastern Ladakh.

“Addressing the long-felt need of the Indian Air Force to increase its fighter squadrons, the DAC also approved the proposal for procurement of 21 MiG-29 along with upgradation of existing 59 MiG-29 aircraft and procurement of 12 Su-30 MKI aircraft,” said the Indian Defence Ministry in a statement.

However, the decision has been ridiculed by Aviation Expert, Tom Cooper, who is surprised that the Indian Air Force (IAF) wants to add more MiG-29s instead of opting for more French Rafales to meet its emergency requirement.

According to an earlier analysis Cooper, despite the Mig-29s lighter frame giving it an extra edge in functioning better than a Su-30 in a region like Ladakh, he feels that the outdated Russian fighters are not the right fit for coming up against the Chinese.

Not India or China, Which Country Will Become The 1st Operator Of Russian Su-57 Jets?

“They (MiG-29s) are simply not up to the task (for being used in combat against the Chinese forces),” said Cooper.

Despite the alleged crash in Libya, Indian aviation experts hailed the MiG-29s for its recent showings in Libya, where Syrian Air Force operated MiG-29s destroyed Turkish missile defense systems that had been installed to protect the Government of National Accord (GNA) and its assets.

Experts in India were left impressed when it was reported that the Turkish radars were unable to detect the approaching MiG-29 fighters in Sirte, making them believe that the acquisition of more such Russian jets would help them replicate their aerial prowess in battles against China in Ladakh. 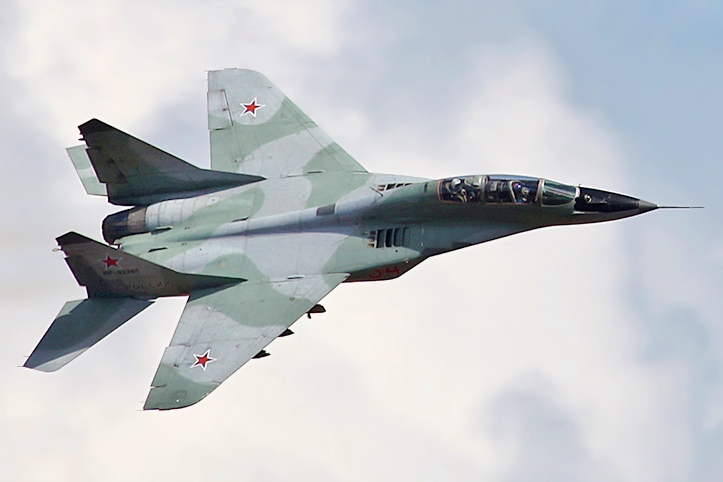 But according to military experts, the IAF could have gotten a better deal for all their money had New Delhi invested in procuring more of the 36 Rafales, five of which are currently deployed in Ladakh and will be officially inducted on Thursday (September 10).

While the MiG-29 is considered one of the world’s most prolific fighter jets due to its usage in both NATO and CIS Air Forces, it is leagues away from the capabilities of a French Rafale or other Western counterparts.

First inducted in the 1980s, the aircraft was conceived as a low-end air-superiority fighter, which could be purchased in huge numbers to bulk up squadrons at a lower cost. One more area where it falls out is that it has a lesser powerful radar as compared to the Rafale which boasts a multi-directional radar system that can detect 40 targets at the same time in a range of over 100 Kilometres.

Moreover, MiG-29s have had a disastrous reputation of late, with an IAF MiG-29 crashing near a village in the northern Indian city of Jalandhar due to it developing a technical snag, back in May. According to a statement released by the IAF,

“One MiG-29 aircraft airborne on a training mission from an air force base near Jalandhar met with an accident. The aircraft had developed a technical snag and the pilot ejected safely as he was unable to control the aircraft,”

Indian vs Chinese Air Force: Why China Does Not Want An Aerial Skirmish With India?

India has lost a fair number of MiG-29s in recent years, with a MiG-29K fighter belonging to the Indian Navy crashing near Goa in February 2010.

Now, despite the IAF reminiscing older memories of the MiG-29 fleet playing a vital role in destroying enemy fortifications in the 1999 Kargil War, should New Delhi look for advanced western jets or continue with Russian technology?