The July 1 crash involving a Belgian F-16 fighter jet is yet another incident that raises safety concerns about the US-made combat aircraft.

However, the US Air Force seems unperturbed despite the rising number of crashes involving its F-16 Fight Falcons. According to a 2019 report by Air Force Magazine, more than a dozen jets crashed between 2014 and 2019.

“The F-16 System Program Office maintains a robust and proactive system safety program, executed in accordance with the United States Air Force guidance and in conjunction with the Air Force Safety Center,” the F-16 program office had told the magazine.

Associated Press reported that the Belgian Air Force F-16 jet crashed into a building while taking off at the Leeuwarden airbase in the Netherlands on July 1. The pilot managed to eject safely.

At €7.8B, Why Indian Rafale Jets Are ‘Double The Cost’ Than Egyptian Rafales?

Why Did Netizens ‘Mock’ Nigeria For Importing JF-17 Jets From Pakistan?

Reports suggest that there were no casualties as nobody was inside the building at the time of the incident. The pilot and a Belgian soldier, who suffered minor injuries, were taken to a hospital.

According to the Dutch Air Force, the cause of the incident was being investigated. The fighter plane was a participant in an international exercise at Leeuwarden military base.

The F-16 is one of the most widely-used fixed-wing fighter aircraft in the world.

In March this year, the remaining fleet of Belgian F-16s was temporarily grounded after this particular jet had developed “engine” problems during takeoff at Florennes Air Base on February 11.

The plane had to make a precautionary landing shortly after takeoff as the pilot reported damage caused by a “nozzle burn”. According to The Drive, Pratt & Whitney F100 Engine’s ‘turkey feather’ exhaust petals began to disintegrate due to excessive heat.

“Following the advice of the engine manufacturer and the aircraft manufacturer, it was decided to take immediate corrective action and to ground the other aircraft in order to carry out checks as quickly as possible”, the Belgian Air Force was quoted as saying.

Developed by American aerospace giants General Dynamics and Lockheed Martin, the fast and agile fourth-generation F-16 combat-proven multi-role fighter jets are considered the most successful cost-effective fighters on the face of the planet. There are approximately 3,000 such fighters operational in around 25 countries, according to The Eurasian Times.

In December last year, a US F-16 Fighting Falcon fighter pilot lost his life after the plane crashed in the Hiawatha National Forest, reported Daily Press.

Captain Durwood ‘Hawk’ Jones was on a training flight from Truax Field in Wisconsin when the incident happened. There were reports that the pilot was disoriented and distracted before the crash. Besides, weather conditions, jet’s position and speed, and low light were the factors that were believed to have contributed to the fatal crash.

In September 2019, a Belgian Air Force F-16 crashed in north-western France, leaving one pilot caught on a high-voltage electricity line, according to BBC. Both pilots suffered minor injuries and were given first-aid in hospital.

Both pilots were lightly injured after they ejected from the plane near Pluvigner in Brittany.

The plane had clipped the roof of at least one house before crashing into a nearby field.

In October 2018, the maintenance personnel at Florennes Air Base in Belgium accidentally fired the M61A1 Vulcan 20mm cannon aboard an F-16, completely destroying another F-16 fighter parked nearby and causing damage to a third one.

It is believed that the Belgian Air Force is struggling to keep its aging fleet of F-16 fleets in working condition.

In March last year, a Pakistan Air Force F-16 jet crashed in a parade ground in Islamabad. According to the New York Times, the PAF pilot, Wing Commander Noman Akram, lost his life during a training exercise for a military parade to mark Pakistan Day celebrations.

In June 2016, two US F-16 fighter jets from the 169th Fighter Wing, South Carolina Air National Guard, crashed in Jefferson County in Georgia, reported CNN. The pilots came out all right and were taken to a Georgia hospital for examination.

The collision “occurred during routine training for the unit’s air defense suppression mission”, Col. Nicholas Gentile Jr., the unit commander was quoted as saying.  According to the US Air Force, one of the pilots failed to properly “deconflict flight paths” which caused the collision. 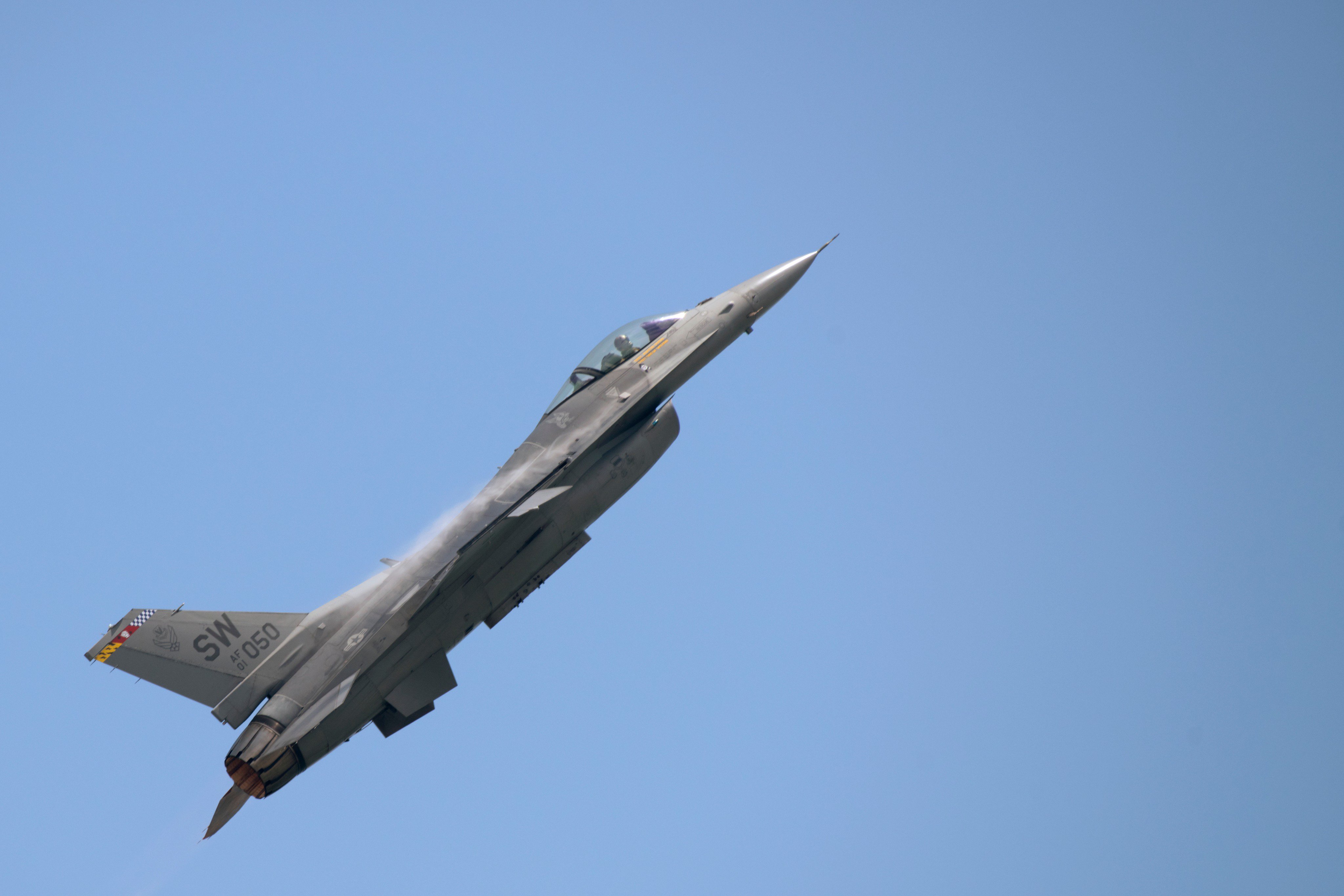 In another incident reported by The Washington Post, a US F-16 Fighting Falcon crashed while taking off near Bagram Air Field in Afghanistan in late March 2016. The pilot ejected safely and was sent for medical evaluation.

The crash occurred after the fighter’s turbine blade failed, thereby damaging the other blades in the engine, according to the Accident Investigation Board’s report.

There was no evidence of negligence found on part of the maintenance crew and the pilot.

In August 2015, a similar incident was reported when an F-16 fighter jet crashed in a forest in southern Germany. The pilot came out safe but reported minor injuries.

The fighter was assigned to Spangdahlem Air Base in Germany. The cause of the incident was attributed to the ‘engine’ as the F-16 jet encountered engine problems, according to reports.