The US Army is inching closer towards fielding its first operational battery of long-range hypersonic weapon (LRHW), Dark Eagle.

With a range of 1,723 miles, the Dark Eagle is expected to provide the US military with the capability to engage targets across the South China Sea. If the missiles were based on the American base in Guam, they could strike Chinese troops besieging Taipei at speeds in excess of Mach 5, according to reports.

The US military as a whole seems to have expedited the acquisition of hypersonic weapons as arch-rival Russia has successfully tested and probably fielded three different types of hypersonic missiles — Avangard, Kinzhal and Zircon.

In mid-August, US Strategic Command Chief Charles Richard, speaking at the annual symposium on space defense, acknowledged that Russian hypersonic technology will provide the Russian Navy with an undeniable advantage.

The Army recently received prototype trailer-mounted launchers of the Dark Eagle along with other crucial components of the complete weapon system at the Joint Base Lewis-McChord in Washington State.

The Army also released a series of images showing the arrival of these launchers on October 5. However, the metadata of the images showed they were taken either on September 14 or 15.

According to the US Army, Joint Base Lewis-McChord is going to house the first unit of this weapon system. The photographs show the launchers as they are being delivered. Each launcher is mounted on M870 trailers, which have been modified and are going to be towed by Oshkosh M983A4 tractor trucks.

These trucks are variants of the Heavy Expanded Mobility Tactical Truck (HEMTT). Though the official designation of the first LRHW unit is not known, the images show that many of these launchers have been given individual names, such as the Hyperion. The name ‘Dark Eagle’ was announced by the Army in August.

According to reports, two empty canisters, similar to the ones which will hold real Dark Eagle missiles in the future were delivered to an undisclosed location earlier this year. The Army has also offered some details about its LRHW battery as well as its various components.

“It’s going to be a battery of four launchers, two missiles per for a basic load of eight”, Bob Strider, Deputy Director of the Army Hypersonic Project Office, said at the annual Space and Missile Defense Symposium in August.

“It’s going to be a Battery Operations Center — that’s our C2 system that is based against an AFATDS, the [Advanced] Field Artillery Tactical Data System …. with a support vehicle. This will be a road-mobile system, which is critical, the ability to move around the battlefield,” he added.

Although no missiles have been delivered to the Army as yet, the launchers along with the other equipment are expected to familiarize the soldiers with the LRHW and the routine operations of the system. They are also expected to help in supporting the development of tactics, techniques and procedures (TTPs).

This is a crucial development for deploying these missiles in real-world scenarios.  The caption associated with the latest images also notes that the prototype LRHW components have been built under the direction of its Rapid Capabilities and Critical Technologies Office (RCCTO).

These include a few components that have not been disclosed and will “allow soldiers to fully train with the system”. 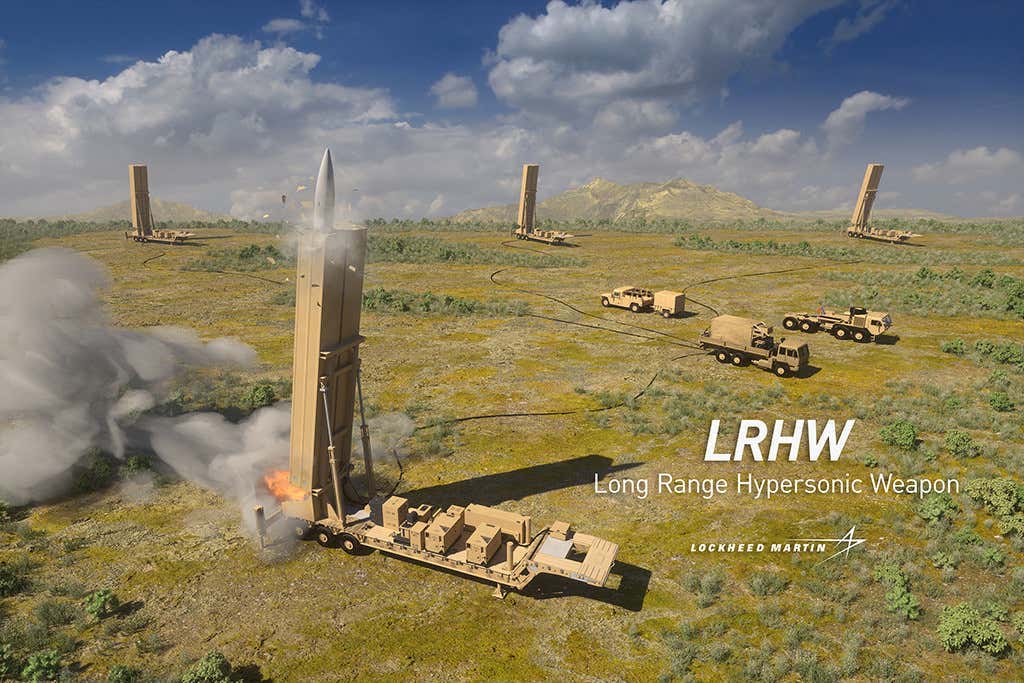 According to previous reports, the Army was set to begin the tests of its prototype LRHW battery in the fiscal year 2022. The service is working towards completing the fielding of its first operational battery, along with live missile rounds, by the fiscal year 2023.

It has earlier fielded its ballistic missiles which are capable of hitting hypersonic speeds, above Mach 5. Once the LRHW is in service, it is going to be the service’s first purpose-built hypersonic weapon.

The LRHW has been developed by both the Army and the Navy. The latter incorporated the same hardware for its Intermediate-Range Conventional Prompt Strike (IRCPS) weapon. Even though the launcher platforms of the IRCPS are different from that of the LRHW, both will use the same missiles, with a Common Hypersonic Glide Body (CHGB) as well as a rocket booster.

The delivery of the first LRHW systems to Joint Base Lewis-McChord signifies the importance of this location on the West Coast, which will allow the rapid positioning of these missiles for conducting future exercises in the Pacific region.

The US Navy will integrate these missiles to new Virginia-class submarines and the Zumwalt-class guided-missile destroyers.

This base is home to the first Multi-Domain Task Force, which has also been created with the Pacific operations in mind. This task force is expected to include a Strategic Fires Battalion which will be equipped with HIMARS launchers, mid-range missiles as well as the LRHWs.

Previous articleIndian, Chinese Soldiers ‘Clash’ At Arunachal; Why New Delhi May Not Be Ready For A 2-Front War With China, Pakistan?
Next articleUS Set To Deploy Israeli-Origin Iron Dome Missile Defense System At A Key Military Facility Near China