With rising military confrontation along the borders of scores of nations across the globe and increasing maritime expansion by several others, there is quite a possibility of a World War brewing up beneath the surface.

From escalating tensions in the East Mediterranean region to the South China Sea and from historical conflicts in the Eurasian region to border disputes up in the Himalayas, here are a list possible conflicts which can spiral out of control and trigger a potential World War. 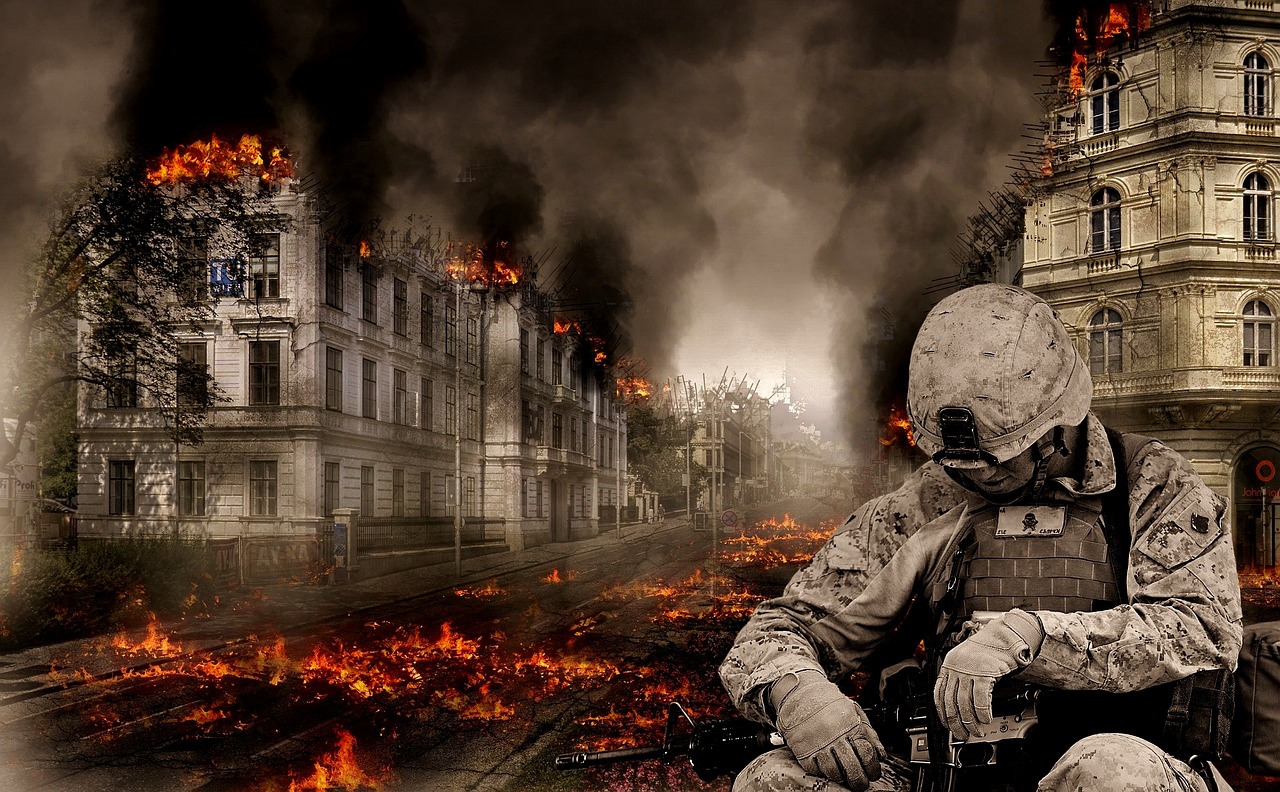 Since long, the two former Soviet republics have been locked in a conflict over Azerbaijan’s breakaway, the ethnic disputed region of Nagorno-Karabakh and seven surrounding districts.

However, in July’s attack by the Armenian Army on Tovuz district of Azerbaijan changed the scale of the entire scenario with both sides suffering losses, especially Azerbaijan, who also lost their Major General, which further escalated the tensions.

Tensions have been so high that Russia had to intervene as President Vladimir Putin called on both the nations to abide by the ceasefire, which was first signed in 1994 and provided two decades of relative stability.

However, with Turkish President Recep Tayyip Erdogan deciding to side with Azerbaijan and holding joint military drills with the nation and Armenia has not held back.

The recent acquisition S-300 Missiles by Armenia from Moscow suggests that if things were to escalate between Yerevan and Baku, a whole host of countries could be involved including Russia and Turkey – a NATO nation, which could further escalate matters.

Kashmir has been a sensitive issue for both the nations, with the conflicted region being at the backend of violence and heightened militant activity leading to two nuclear-powered nations to fight a battle that seems never-ending.

Ever since Prime Minister Narendra Modi withdrew the autonomy of the Jammu and Kashmir and split it into two federally-administered territories, tensions have only risen further.

What complicates it further is Islamabad’s backing by China, which continues to strengthen the military of Pakistan in order to force New Delhi to divide its resources in fighting each of its borders.

On September 03, Pakistan’s move to list two Indian nationals as global terrorists was blocked by 5 UNSC members – US, UK, France, Germany and Belgium. New Delhi suggests that through this move, Islamabad is trying to hit back following India’s successful appeal for the designation of Jaish-e-Mohammed chief Masood Azhar as a global terrorist under the UNSC 1267 sanctions committee last year.

Jaish-e-Mohammed was the same group which carried out an attack on a convoy of Indian paramilitary forces in Indian-administred Kashmir killing at least forty soldiers, the deadliest attack in Kashmir in three decades.

New Delhi is also spearheading the appeal for Pakistan to be blacklisted under the global terror financing watchdogs Financial Action Task Force (FATF), the implications of which will be disastrous for the economy and credibility of Pakistan.

Now, with Beijing continuing to back its “Iron Brother” Pakistan and vice versa, it could mean a two-sided war for New Delhi. And India has the staunch backing of the US, Russia and France which makes the situation very complicated.

No one knows what will happen if India faces a two-front war against China and Pakistan but one thing is for sure – it will be calamitous for the world since all three nations are nuclear powers.

The two East Mediterranean neighbours have been at loggerheads over a wide range of issues including the overlapping claims over the hydrocarbon resources in the region, mapped out by contradictory claims over territories.

While France and Germany had earlier intervened to calm tensions, France’s reported deal to supply 18 Dassault-made Rafale fighter jets to Athens hasn’t gone down well with Turkey. Ankara has even issued threats to ‘shoot down’ UAE fighter jets who carried out joint military drills with Greece.

Greece, which is backed by the majority of EU nations, Egypt and the UAE, has continued to stamp its authority by stating that its possession of numerous islands gives it sovereignty over the disputed waters. However, Turkey has refused to budge. Both nations are now beefing up their naval and air forces.

With Turkish President Recep Tayyip Erdogan’s accusation against European nations for using Greece as ‘bait’ to ‘descend on the riches of the Mediterranean’, Ankara has sent out warships along with a vessel to do seismic surveys in the area, hinting that it will not tolerate other nations coming to the rescue of Greece without a certain price to pay.

This conflict could see an unforeseen clash between NATO countries.

There has been an unforeseen upsurge in tensions between the two nations ever since June’s Galwan Valley Clash in Eastern Ladakh which claimed the lives of 20 Indian and an unspecified number on the Chinese side.

Prime Minister Narendra Modi has shown his resolve by expanding a ban on 118 Chinese mobile apps to counter its massive presence in internet services. The move was followed by stricter norms for investments.  Such decisions have been strongly opposed by China.

Now, despite both the nations signing on a five-point consensus involving disengagement of the troops, they have continued to beef up their defences along the border.

With India reportedly deploying the newly inducted Rafale jets against China’s missile defence systems at the border, hinting that neither of the two countries are ready to let their guard down, just yet.

A possible confrontation between India and China will certainly see the US providing both overt and covert assistance to New Delhi. However, both the nations, India and China are nuclear powers with one of largest military powers on the planet and a full-scale clash between two economic and military giants could plunge the global economy into a point of no return.

Not much has changed over China’s role of being an extreme aggressor as it continues to fight battles across many fronts. One prominent long-going saga has been its clash with Taiwan, which Beijing considers a “renegade province”.

Taiwan is considered by China as part of its own region and Beijing has left no stone unturned to diplomatically isolate the island by pressurising many countries to change their allegiances to China.

However, what makes it messier is that the United States has continued to remain the island nation’s main ally and military supplier, despite repeated warnings from Beijing of its eventual takeover.

With the recent F-16 “Viper” jets deal worth $62 billion, US has made Taiwan’s F-16 fleet to be the largest in Asia, subtly hinting that if China had invasion plans over the island nations, the Trump administration would not think twice in joining hands with Taipei against President Xi Jinping.

Taiwanese Foreign Ministry while labelling the acts as a threat against the country and its regional peace, issued a warning to Beijing that “Taiwan does not seek confrontation, but neither will it back down.”

With the US vehemently backing Taiwan, China has not dared to invade the island nation, so far, despite claiming that its merger with the mainland is inevitable which will be done with force if required.

If Beijing does dare to cross the line, China and the US, the world’s two biggest superpowers, will get involved in a direct conflict which is bound to involve NATO nations on the US side and Russia on the Chinese side.

Iran and Israel have had an escalation in tensions ever since the US’ decision in 2018 to unilaterally pull out of the 2015’s Joint Comprehensive Plan of Action. Even before, the possibility of a potential clash between two Middle-East nations remained extremely high.

Moreover, the recent United Nations Security Council’s rejection of its draft resolution to extend the arms embargo indefinitely against Iran, a decision which was supported by the likes of Russia and China, has further angered the US.

It has left Israel to believe that Tehran, who according to them ‘advocates their destruction’, will now be looking to acquire a host of modern weaponry from the likes of Moscow mostly, in the form of S-400 missile defence systems and latest fighter jets like the Su-30s or Su-57s.

The Trump administration is keeping a global squeeze on the Islamic Republic by targeting nations engaged in illegal trade with Iran, with U.S. Ambassador to the United Nations Kelly Craft, stating –

“The United States must keep the pressure on the regime in Tehran as long as it creates conflict, chaos, and human suffering. Endangering millions of innocent men, women and children in Syria, Yemen, Lebanon, Iraq and other parts of the Middle East cannot be tolerated. Cutting off revenue to the world’s No. 1 sponsor of terror will save lives.”

Now, with the US continuing to hold multiple military exercises with Israel, who they have armed with their state-of-the-art, stealth F-35 fighter jets, there is a very high probability that Israel with the American support could plan pre-emptive strikes on Iranian Nuclear facilities or military installations, especially if Tehran acquires latest Russian hardware or gets close to developing a nuclear bomb.

Iran, as it has been claiming, is bound to strike Israel and US bases in the Middle East. Its missiles are also capable to reach most parts of Europe, thus endangering key NATO nations including the UK.

With Russia and China staunchly on its side, analysts believe that an attack on Iran could potentially trigger a World War and that is the reason even the mighty US is treading cautiously on the Iranian matter.