While the Russian Su-57 and the Chinese J-20 fighter jets are touted as fifth-generation stealth fighters just like their counterparts – the American F-22 Raptors and F-35 jets, several analysts have raised questions on this classification and Russian and Chinese claims.

The Russian-origin, Su-57, developed by Sukhoi, took its maiden flight 10 years but still hasn’t entered service. Currently, the Russian Defence Ministry is the only customer that has ordered 76 fighters which will be received in 2028.

The multirole fighter jet is capable of destroying all air, ground, and water surface targets. The stealth coating also keeps the weapons concealed.

It was developed as a competitor for the American F-22 Raptor and F-35 jets. It is capable of supercruising at Mach 1.6, however, only one serial production aircraft has been built (other than 10 test prototypes) and the design is yet to prove itself in the battlefield.

Why India Simply Refuses To ‘Name & Blame’ China At Global Forums Despite All Its Hostilities?

However, Su-57’s stealth capabilities and cross-section capacities are questioned by experts. The Indian Air Force has also displayed concerns regarding the cost of servicing and maintenance of the fleet.

RAND Corporation, an American nonprofit global policy think tank, pointed out in its paper that a fifth-generation fighter bomber does not only have low observable (LO) features but also the advanced all azimuth sensor suite.

“At the present time, only the F-35 has both of these features and is in mass production,” the paper stated.

The makers of Su-57 are also facing a challenge in developing the second generation engine. Citing a former aircraft engineer for Sukhoi, the paper stated that the 76 “operational” models that the Russian Federation Air Force is expected to receive during the 2020s will not have the intended second-generation engine.

On the other hand, the Chinese J-20, developed by Chengdu Aerospace Corporation, entered service in March 2017. It maintains stealth by carrying the weapons in internal bays. It can carry longer-range missiles and precision-guided bombs.

Upto six air-to-air missiles can fit in the fighter jet due to greater space in each bay. 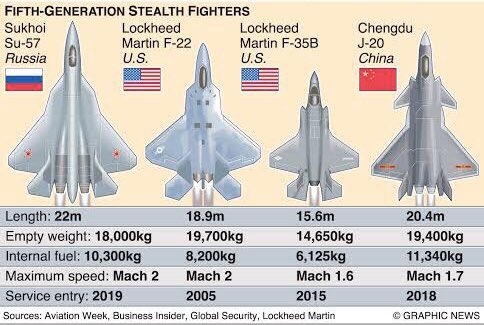 The F-22 entered service in December 2005 and continues to dominate the global fighter jet market. Both F-22 Raptor and Chengdu J-20 are single-seat fighter jets with stealth capabilities and are similar in size as well.

Both the jets also possess deeply integrated advance avionics and sensor equipment with starring a low-observable, active electronically scanned array that can detect multiple targets in any weather conditions.

Interestingly, China keeps referring to its J-20 as a fourth-generation fighter jet. The reason behind this is that the Chinese People’s Liberation Army (PLA) uses a different method of classification of fighter generations.

According to The Week magazine, the US Navy’s Office of Naval Intelligence explained this classification system in a report on the Chinese Navy in a 2007 report.

“The PLA’s system… does not necessarily match the international system. The PLAAF and Naval Aviation identify their aircraft only as 1st, 2nd, and 3rd generation based on when they were first integrated into the force.” But the Chinese media keeps referring it as the fifth generation, following the western classification, which adds up to the confusion.

While Russia hasn’t succeeded at roping any foreign customers for the fighter jet, it still sees China as a potential buyer.

Citing a Russian Defence media outlet, Mark Episkopos of the National Interest, talked about the “mutual benefit” of a China Su-57 import deal. He argued that the J-20 was designed as a stealth missile platform that can penetrate sophisticated air defences in order to target critical infrastructure or military assets.

“The Su-57, on the other hand, excels as an air superiority platform that trades stealth and ground attack features for raw dogfighting potential.”

While India displayed some interest in exploring Su-57 and had earlier collaborated with Moscow for the fifth-gen fighter jet, however, New Delhi pulled out of the project after the Indian Air Force was not happy with its performance, during its development.

Overall, experts believe that both Russian Su-57 and Chinese J-20 are stealth, fifth-generation fighter jets and look very promising on paper, however, can they really match the F-35s or even the latest F-16 Vipers, Dassault Rafales or Eurofighter Typhoons remains a very big question.