The export version of Russia’s Su-57 fifth-generation multirole fighter will be unveiled for the first time at the Army-2020 international military and technical forum. It has been organized by the Russian Defence Ministry and will be held from August 23-29 at the Russian Armed Forces’ Patriot Congress and Exhibition Center reported Tass.

“The Su-57E export version of the fifth-generation fighter will be demonstrated for the first time at the Army forum as part of its static show and will also take to the skies under the flight program,” announced the press office of the state hi-tech corporation Rostec. The plane will also take part in the forum’s flight demonstration program, it added.

The spectators at the forum will also witness flights of a MiG-35 light multirole fighter, a Ka-52 reconnaissance and attack helicopter, and an upgraded Ka-27M deck-based gunship.

The Berkuts (Golden Eagles) aerobatic team will also display the capabilities of a Mi-28N helicopter in solo and formation flying. 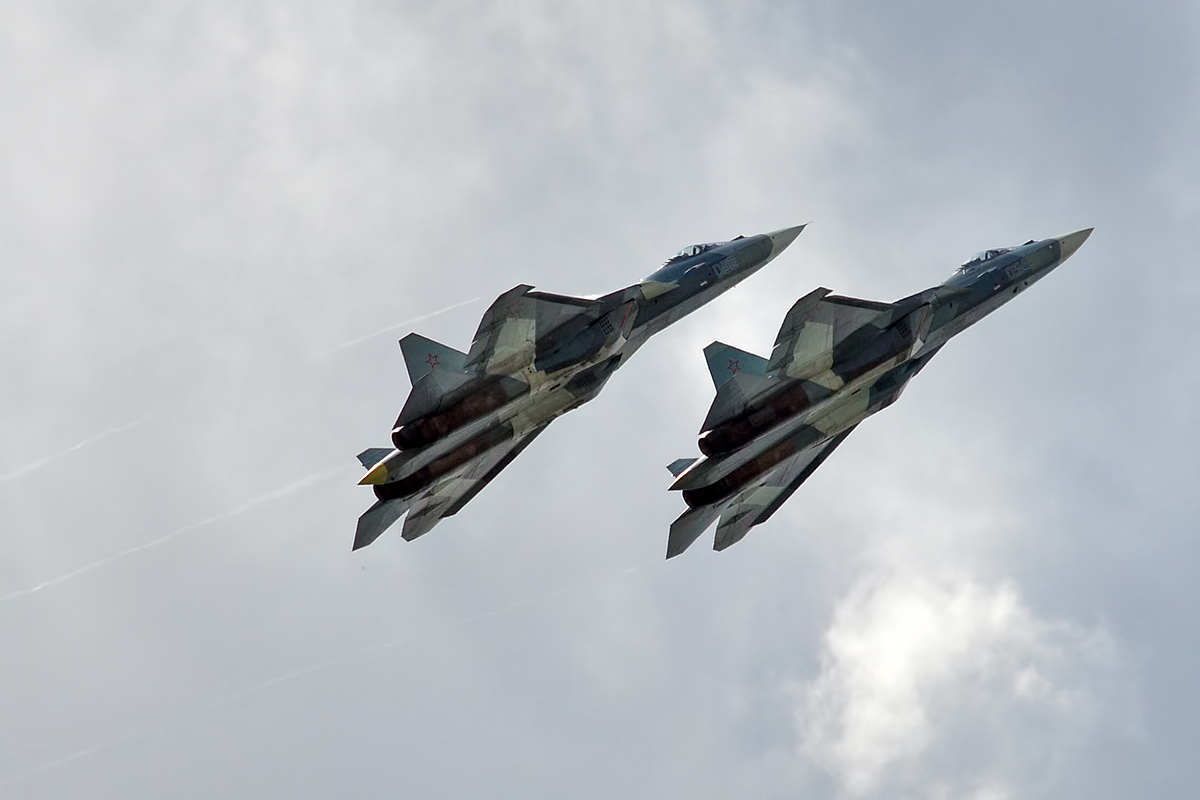 The Su-57 took its first flight in 2010. Combining the capabilities of an attack plane and a fighter jet, the use of composite materials and innovative technologies and the fighter’s aerodynamic configuration ensure the low level of radar and infrared signature.

As reported earlier by EurAsian Times, the Su-57 fighter jet is designed to have supercruise, supermaneuverability, stealth, and advanced avionics to overcome the prior generation fighter aircraft as well as ground and naval defenses.

Last year, Russia deployed pairs of Su-57s to Syria for what it claimed were combat trials. However, there’s no evidence to prove that the fighters actually participated in front-line missions. The sources that TASS cited didn’t specify the place and date of the experiment. The report also failed to describe what ‘real combat conditions’ meant.

The fighter aircraft features stealth technology with the broad use of composite materials, is capable of developing supersonic cruising speed and is furnished with the most advanced onboard radio-electronic equipment, including a powerful onboard computer (the so-called electronic second pilot), the radar system spread across its body and some other innovations, in particular, armament placed inside its fuselage. It is designed to destroy all types of air, ground, and naval targets.

The fifth-generation fighter jets will be first received by the Western Military District of Russia. India has shown some interest in Russia’s Su-57 next-generation heavyweight fighter, although with the aircraft having yet to enter service in the Russian Air Force, New Delhi is likely to wait and assess its performance before making any commitments.

Experts talking to The EurAsian Times stated that the possibility remains that India could seriously consider exploring an initial batch of ‘off the shelf’ Su-57 jets from Russia to evaluate their capabilities – before entering into a contract for joint production.

Additionally, to counter Chinese build-up in the Ladakh region and challenge their J-20 stealth jets, you never know if the Modi government could make a surprise move.

This would be consistent with its acquisition strategy for the Su-30 – as before the joint manufacturing of the Su-30MKI India purchased and evaluated the Su-30K from Russia.

The capabilities of the jointly manufactured Su-30MKI variant were far superior to the Su-30K, but operating the jet familiarised the Indian Air Force with the airframe and its performance limitations – much as a Su-57 could do to precede a joint next-generation program.

After India, Why Is Moscow Deploying Thousands Of Soldiers Near Russia-China Border?

Amidst China’s aggressive advances at land and at sea, the United States led Quadrilateral Security Dialogue (QSD) alliance with India,...

India has successfully developed an armour jacket for security personnel that is capable of protecting against bullets of different threat...