With tensions continuing to escalate at the India-China border ahead of the next month’s much-awaited meeting between Prime Minister Narendra Modi and Chinese President Xi Jinping, militaries of both nations have been busy bracing themselves for a potential war in Eastern Ladakh.

While keeping tabs on the volatile situation in the region, Indian Air Chief Marshal RKS Bhadauria on Monday (October 05) stated that while the Indian Air Force (IAF) has not taken any measures to strike the first blow yet, it has been prepared for war ever since the Galwan Valley clash.

Recently, New Delhi has been making significant efforts to beef up the border security with the deployment of additional troops, massive stocking of ration, equipment, weapons, winter clothing and tents suitable for the high-altitudes and terrains of the harsh climatic situations of Eastern Ladakh.

Moreover, according to reports, the country has also deployed a large number of T-90 and T-72 tanks, canons along with BMP-2 infantry combat vehicles in several sensitive areas like Chumar, Depsang and Chushul sectors of the region.

Bhaduria, while labelling the move as India’s “determination to handle any contingency”, said,

“(The) deployment of combat-ready units in response to the standoff along the LAC in the North is indicative of our operational state today,”

We are very well positioned and there is no question that in any conflict scenario there that China can get the better of us.”

While answering a reporter’s question regarding the IAF coming close to striking India after the Galwan Valley clash which led to the death of around 20 Indian soldiers, Bhadauria said,

“Did we come close to striking? No. But were we prepared for it? Yes.”

India, which has added steel to its aerial threat with the acquisition of 36 Dassault Rafales from France, five of which have already arrived in the country and officially inducted, the country feels it has a strong foundation to compete with the People Liberation Army’s Air Force (PLAAF). 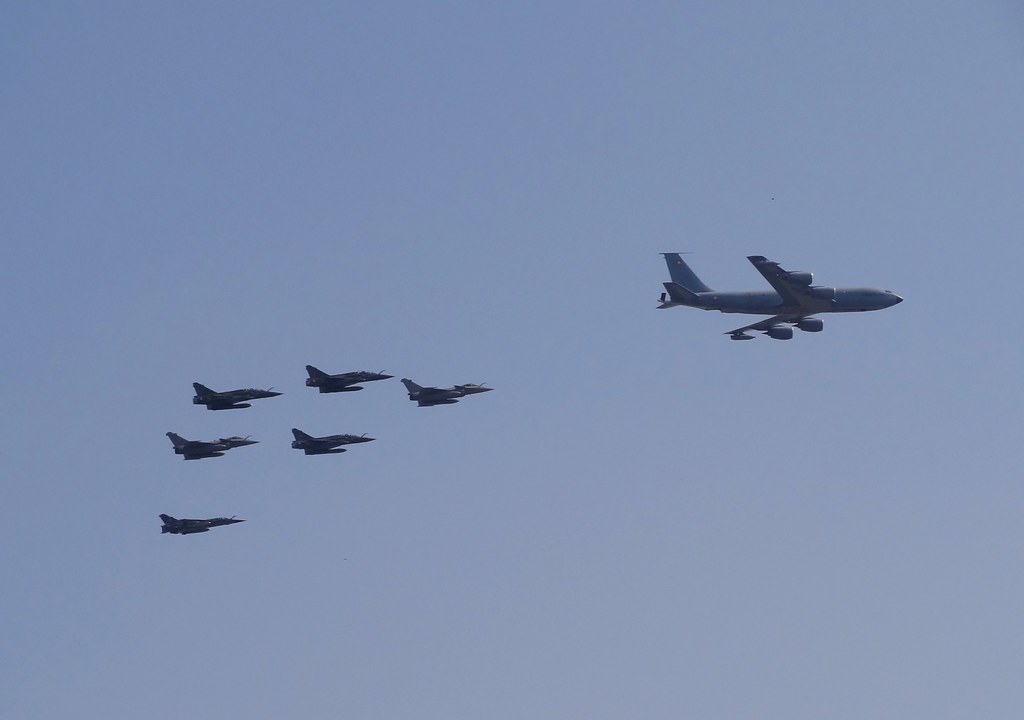 Officially established in November 1949, the PLAAF is the largest air force in the world, composed of five branches including aviation, anti-aircraft artillery, surface-to-air missiles, radar and an Airborne Corps, it fails to stand close to militaries of the west or even say India when it comes to effectiveness.

While India’s air fleet includes the likes of all-weather MiG-29 multi-role aircraft, Su-30 MKIs, Mirage 2000s alongside the Rafales, most Chinese fighters are a result of copying and reverse-engineering, and therefore possess less powerful jet engines and are also less reliable than a western aircraft.

The Chinese have a fair share of modern fighter aircraft at their disposal, most notably the Chengdu J-20, with China becoming only the second country in the world to field a domestically-designed and produced stealth fighter.

In September, the fighters took part in a simulation drill to knock down 17 enemy fighter aircraft, believed to be Rafales, while avoiding all return fire, according to Chinese reports. Many experts, however, termed it the drills as psychological warfare.

However, while songs of praises are always on the lips of the Chinese when it comes to the stealth fighters who bear similarities to the U.S. Air Force’s F-22 Raptor, the J-20 is deemed far from the finished article they are said to actually be.

Why France Delivered Its 1st Rafale Jet To India In 8 Years While Greece Could Acquire Them In Less Than A Year?

They lack supermaneuverability owing to their traditional exhaust nozzles and underpowered engines, which make them incapable of actually being superior to the Indian Rafales.

Moreover, with China struggling to produce a sufficiently-powerful engine for the fighters within their boundaries, they have been forced to opt for a foreign design from Russia to improve its performance in a bid to be level with the Indian top fighters.

“If the IAF is successful in the destruction of enemy air defences and suppression of enemy air defences, then the Chinese fighters out in the open at Hotan airbase and at Gonggar airbase at Lhasa airport are fair targets. Some 70 Chinese aircraft are without protection at Hotan and some 26 aircraft may be parked inside a tunnel which the PLA were building at Lhasa airbase,” said Dhanoa.

Why US-Led QUAD Can Never Be A Reality Despite Members States Vow “Coordinated Response” Against China?

The Rafales hold an edge over most of the Chinese fighters due to a deadly weapon in their armoury, known as the Meteor, which is a ramjet-powered, radar-guided, beyond visual range (BVR) air-to-air missile with an estimated range of 120-160 km.

Also unlike any Chinese aircraft, the Rafales which are used by the French Air Force and Navy, as well as Egypt and Qatar Air Force, have seen a lot of action with 100% success rate in Afghanistan, Libya, Iraq and Syria while China’s most advanced stealth fighter jet – J-20, has no combat experience and thus remains unreliable.

For The 1st Time Ever, Israeli Jets Conduct ‘Historic Drills’ In Germany & Eurofighter Typhoon Tweets It

According to a high-ranking Indian Air Force official who did not wish to be named, the Rafale jets will spearhead the attack, taking out PLA ground positions first while and keeping the Chinese PLAAF jets out, if a war with China ensues.

“So far, a war seems to be an unlikely option, but there is no certainty that it will not happen. If it does, the Rafales are tested to lead from the front, unlike the Chinese planes which are carbon copies of western planes without their effective engines”.

It is true that China has strength but war is won not just by strength but by combat experience, and if there was a duel between India’s top fighter and China’s as well, we know France will take credit for it at the end of the day.”